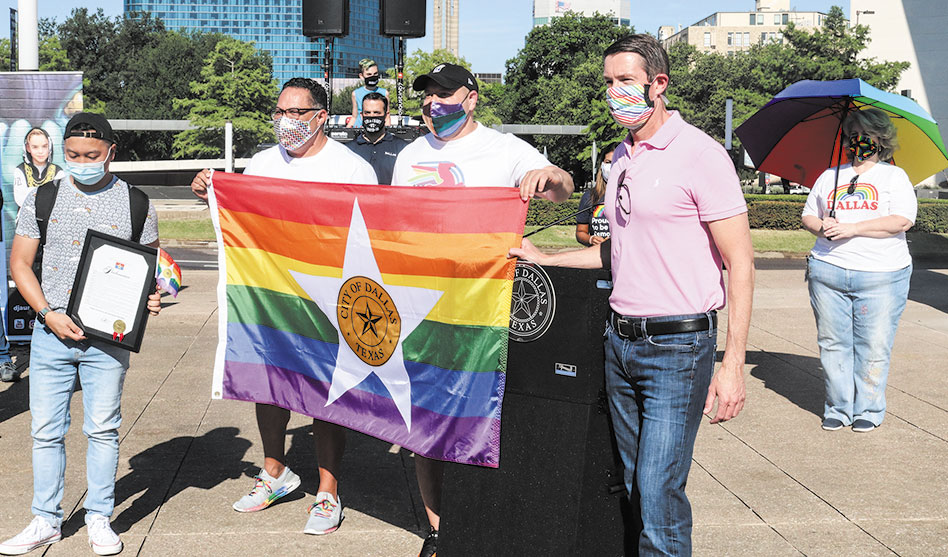 Although the COVID-19 pandemic has forced most in-person Pride events around the world this year to be postponed or cancelled, the global LGBTQ community has rebounded, put our collective ingenuity to work and found whole new ways to celebrate — online.
Virtual Pride events are flourishing, and here are just a few — including Dallas Voice’s very own Pride Party Online, hosted by Cassie Nova and featuring a slew of celebrity guests.
Here is a list of events we know of so far. Get all the details, then sign on and SHOW YOUR PRIDE.

Dallas Voice Pride Party on Facebook Live
Dallas Voice will hold its first Pride Party Online, hosted by Cassie Nova and streaming on Facebook Live on Sunday, June 28, the 51st anniversary of the Stonewall Riots.
Longtime LGBTQ fave Leslie Jordan is among the celebrities appearing in the Pride Party online. During the COVID-19 lockdown, Jordan has gained a huge and diverse online audience with his daily dose of Leslie just being Leslie. 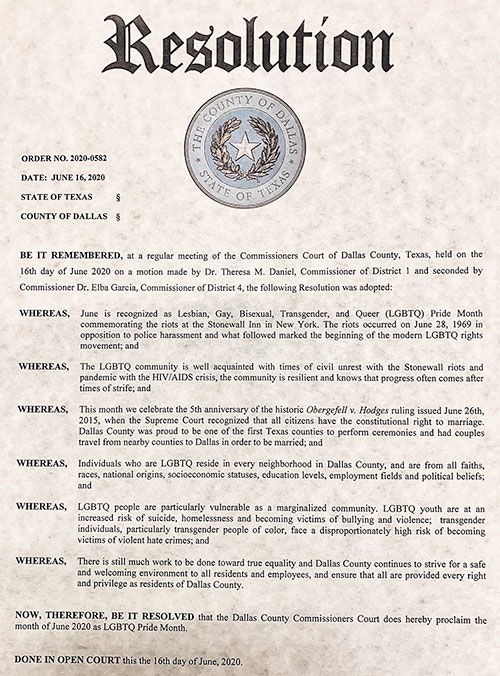 Jordan was already well known and loved for his award-winning performance as Beverly Leslie on Will & Grace and as BrotherBoy on stage and film in Del Shores’ Sordid Lives. He’s appeared in Dallas a number of times to raise money for Legacy Counseling Center.
Pepper Mashay will sing something from her long string of No. 1 dance hits that includes “Something to Feel,” “Happiness,” “Step into My Life,” “Sextacy” and “Send Me an Angel.” Singer and songwriter Kym Sims appears as well.

The Turtle Creek Chorale put together an ensemble video for the broadcast. Because of social distancing, they could not sing together, so instead, they sang individually, and Artistic Director Sean Baugh then wove those individual voices together to create a chorus singing apart but together.
The Pride Party will include video of past Alan Ross Texas Freedom Parades from archival DVTV broadcasts interspersed with the performances, and to round out the mix, DJ DrewG will be part of the lineup.
Presenting sponsor of Dallas Voice Pride Party is HELP Center of LGBT Health and Wellness. Sponsors include Toyota of Irving, Bud Light Seltzer, AIDS Outreach Center, Goody Goody Liquor and the Greg Dollgener Memorial AIDS Fund.

The performance takes place on Sunday afternoon, June 28 at 2 p.m.-3:30 p.m. on Facebook Live or at DallasVoice.com. Visit the Dallas Voice Facebook page for more information.

Dallas Pride
In 2019, the Pride festival and Alan Ross Texas Freedom Parade were moved from September to the first week in June and from Cedar Springs Road and Reverchon Park to Fair Park.
Because of COVID-19, both were delayed until July 25-26, the last weekend available before the State Fair of Texas begins setting up in Fair Park. As Covid-19 continued to claim an increasing number of lives, the decision was made to make Pride virtual.
Virtual Dallas Pride will take place on July 25 and 26. See DallasPride.org for information.

Dallas Wings and Del Shores team up for GDMAF
The Dallas Wings will participate in Rise Together, a one-night-only, virtual fundraising event hosted by Del Shores and benefiting the Greg Dollgener Memorial AIDS Fund.

Viewers will be able to engage by chat with Del Shores, win prizes, bid on items in the online silent auction, enjoy performances by various celebrity and local MetroBall artists, hear a special PRIDE message from the WNBA’s Dallas Wings and learn first hand from organizations and individuals whose lives have been changed by the volunteers and the generous community supporters of GDMAF. 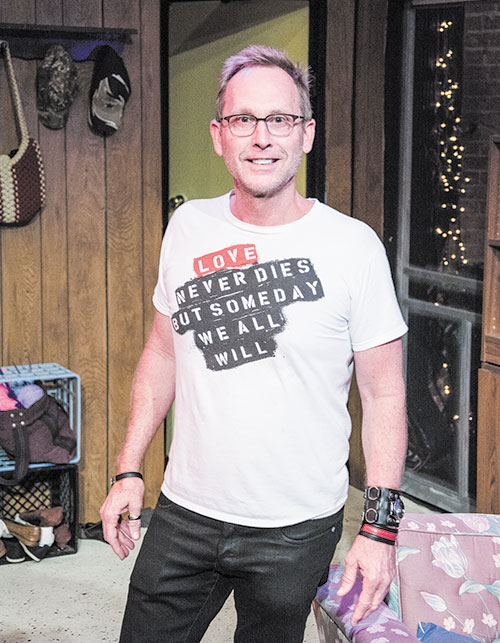 Special guest host Del Shores is the writer/director/producer of the films Sordid Lives, Blues for Willadean, Southern Baptist Sissies and A Very Sordid Wedding. He wrote and executive produced the MGM feature Daddy’s Dyin’ … Who’s Got The Will? Of the seven plays he’s written, four have been adapted for screen. The play adaptation of his film A Very Sordid Wedding premieres in Dallas in August at Uptown Players. His latest standup show Del Shores The Sh*t Stirrer is currently on tour.

The Dallas Wings organization is proud to support GDMAF and its efforts to help those living in North Texas with HIV and AIDS, a team representative said. The Wings organization is “proud to work in conjunction with a local non-profit but also to support a local business such as Pride Basics, which is known for supporting and giving back to the LGBTQ Community,” the representative said. “With the effort to work together during the global pandemic while still celebrating Pride Month, we will once again ‘Rise Together’ to and help raise funds for GDMAF. 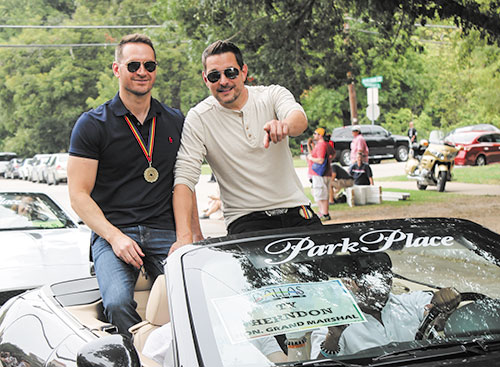 You can also go online now to GDMAF.org/RISE to pre-order a special Pride Box with a customizable RISE TOGETHER event t-shirt and a special assortment of GDMAF and Pride swag. Order by June 23 to receive the box in time for the event. The boxes will still be available during and after the online event and 100 percent of the proceeds goes directly to GDMAF.

Rise Together takes place at 7 p.m. on Tuesday, June 30 at GDMAF.org/RISE.

Together We Stand
June 26 from 4-7 p.m. in Reverchon Park
The LGBTQ community supports Black Lives Matter and Trans Lives Matter. Show your support with signs at this peaceful protest.

LGBTQ S.A.V.E.S. Pride Event
June 25 at 6:30 p.m.
Facebook.com/lgbtqsaves
A virtual party with drag performances and messages of support from the Dallas Wings and members of the community.

Resource Center
• Glowing with Pride Gaybingo 2.0
June 20 at 7 p.m.
Tickets and info at GlowingWithPrideGaybingo.eventbrite.com
• Get Centered Evening Tour
June 23 from 5-6:30 p.m.
Register at June2020GetCenteredpm.eventbrite.com
• Transgender 101
June 25 from 11 a.m.-12 p.m.
Virtual training
• Toast to Life
July 25 from 7-8 p.m.
Music, auction and fun at this virtual event hosted by Steve Kemble with entertainment by the Roof Raisers and DJ Blake Ward.

USA Film Festival celebrates Pride
Friday, June 26, 7 p.m.
Angelika Film Center & Café–Dallas, 5321 Mockingbird Lane
Celebrate Gay Pride Month and join us for a program of new short films by U.S. and foreign filmmakers from the LGBTQ community. Tickets are free, but you must call for reservations (no walk-ups for this event). For more info about this screening and to get instructions on how to request tickets, visit: http://www.usafilmfestival.com/images/USAFF50.Flyer.new.pdf

Family Equality— Out in Texas
FamilyEquality.org/out-in-texas-marriage-equality
A six-chapter video series on marriage equality about two couples from Texas including one from Dallas. The series explores how marriage equality has changed the lives of many Texas couples and families.

Global Pride
June 27
More than 500 Prides around the world contributed more than 1,000 films for Global Pride with speeches from world leaders, performances and shout-outs from celebrities. Look for the Global Pride channel on Facebook, Twitter, Instragram and TikTok.

The Stories of Dear Harvey
Three free, live digital screenings on June 26, July 1 and July 12
BreakThroughWorkshop.org
The Stories of Dear Harvey is a documentary-style video that interweaves stories from the play Dear Harvey, with stories from the creators and the artists who have been changed through their work on the play for over a decade. Inspired by and expanding on the play’s original mission to spread Harvey Milk’s message of love and hope, this project also reflects on the legacy of Dan Kirsch, who originally commissioned and produced the play at Diversionary Theatre in 2009; and is told through the unique perspective of Breakthrough Workshop Theatre, a San Diego-based educational nonprofit which has presented an annual reading of Dear Harvey since BWT was founded in 2013.

Logo celebrates Pride Month
Logo will spotlight diverse entertainers, activists, creatives, and change-makers in the LGBTQ community, throughout the month of June, with its third installment of Logo30. The powerful series profiles everyday heroes and extraordinary people who show pride in unique and provocative ways. Among those scheduled are Randy Rainbow, Senator Tammy Baldwin, Bob The Drag Queen, Chasten and Pete Buttigieg, Dyllon Burnside, Penn. state Rep. Brian Sims, Tig Notaro and others.

Pride Radio
Virtual Friday happy hour on June 19 from 8-9 p.m. in partnership with ReadySetPrEP hosted by Pride Radio at youtu.be/oLCe-ABOJzc.