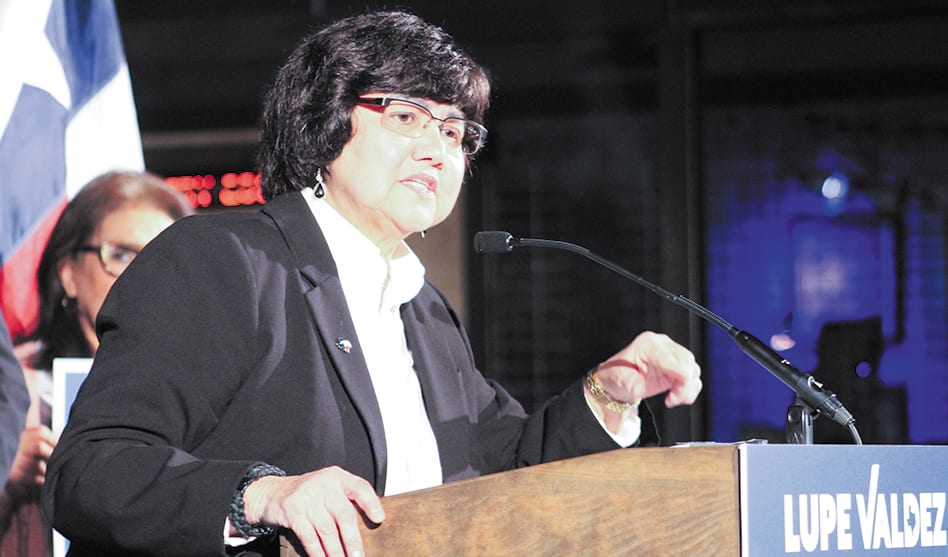 DAVID TAFFET | Senior Staff Writer
taffet@dallasvoice.com
The LGBTQ Victory Fund this week endorsed former Dallas County Sheriff Lupe Valdez in her runoff election for the Democratic nomination for Texas governor.
Victory Fund spokesman Sean Meloy called her candidacy “historic,” noting that while there will be an LGBT candidate in four or five gubernatorial races around the country, only in the Texas race is there a chance for a lesbian of color to win.
He explained Victory Fund doesn’t endorse every candidate that applies; the organization looks at the candidate’s viability and plan to win.
“Folks are excited in Texas this year,” Meloy said. “We’re going to build off the successes of the last year.”
But he was realistic about Valdez’s chances in the general election, saying she has a tough race ahead and a big fight to win.
“I am honored to have the Victory Fund’s support,” Valdez said in a press release. “With attacks on LGBTQ Texans coming from Tea Partiers in Austin, we know it’s critical that we continue to push for equality and stand with members of the LGBTQ community. Our campaign is grateful for the endorsements of the Victory Fund and Stonewall Democrat chapters in Houston, Dallas, Austin, San Antonio and Denton.”
Valdez is one of nine Texas candidates Victory Fund has endorsed so far for the November election. Victory Fund awarded Valdez “Game Changer“ status — a designation given to high-profile federal or statewide races that can have an outsized impact on equality.
U.S. House candidate Gina Jones from San Antonio was also given “Game Changer” status.
Others endorsed are challenger Julie Johnson and incumbent Mary Gonzalez in races for the Texas House, Steven Kirkland for Texas Supreme Court, Fran Watson for a Texas state Senate seat from Houston and several judicial candidates.
“We have an unprecedented number of LGBTQ people running for office this cycle — some running races to become historic firsts and others running to take out anti-LGBTQ incumbents and be champions for all their constituents,” said Annise Parker, president and CEO of LGBTQ Victory Fund.
Also endorsed in this week’s announcement was David Ermold, who will face anti-LGBT county clerk Kim Davis of Rowan County, Ky. Davis received international attention when she refused to provide same-sex couples with marriage licenses in the wake of the U.S. Supreme Court’s marriage equality decision.
“We’re taking the fight to the bigot,” Meloy said. “David was personally affected by her miscarriage of duties.”
Ermold was one of the people denied a marriage license by Davis.