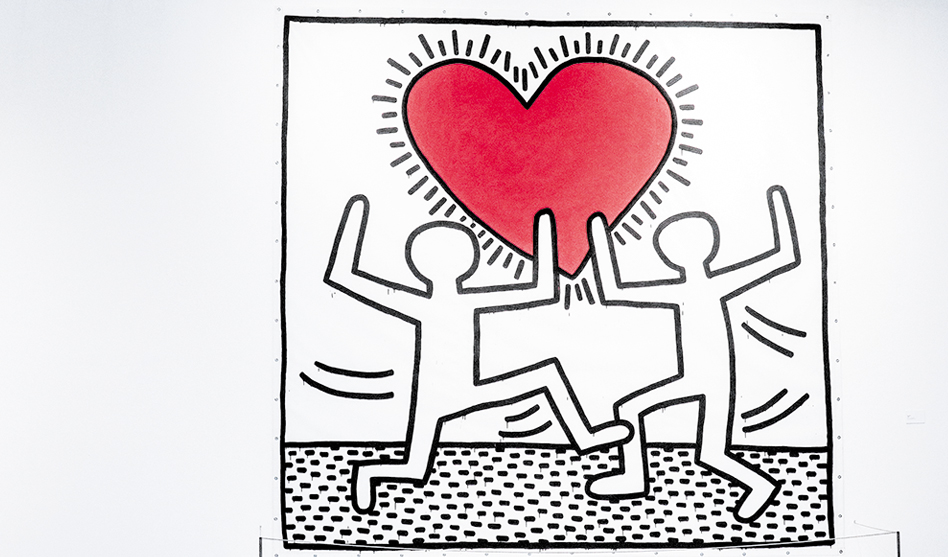 Large enamel on vinyl painting is the centerpiece of the Arlington Museum of Art’s Keith Haring exhibit.
(David Taffet/Dallas Voice)

Keith Haring’s work encompassed many of the issues of the 1980s, but he’s best loved for boldly calling attention to the AIDS crisis in a way no other artist did. 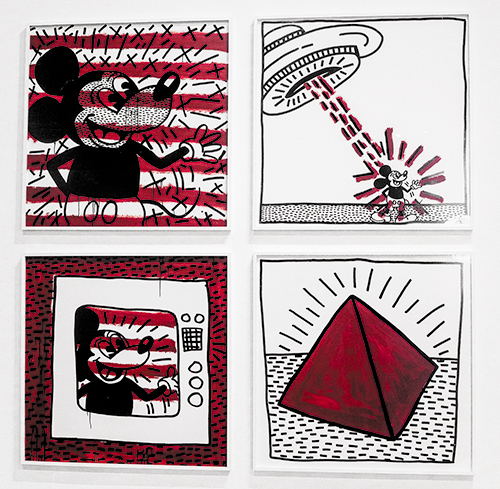 Haring moved to New York City in 1978 and began his career as a graffiti artist. New York City subway stations are lined with advertising. Spaces not being used are painted black. Using chalk, Haring would jump off a subway, sketch a quick line drawing and, when not caught and arrested by MTA police, jump back on the train and head for the next station.

When he began painting murals of his stick figures on walls around the city, his popularity grew.

While some considered his work vandalism, others began recognizing the talent behind the drawings. And what began as doodles became valued as art.

As Haring began painting with enamel on fiberboard and ink on vellum, more experimental galleries began hanging his work.

While Haring’s style is distinct, he was influenced by a number of artists. The first was his father, an amateur cartoonist. Robert Rauschenberg’s cartoon style, Andy Warhol’s pop art and Jasper John’s abstract expressionism can all be seen in his work. He was also influenced by African and tribal art.

The Arlington Museum of Art has an exhibit of a variety of Haring’s works that remains on exhibit through Sept. 15. Museum Director Brian A. White described Keith Haring: Against All Odds as the museum’s most successful exhibit ever in terms of attendance as well as in terms of merchandise sales.

Merchandise sales would have pleased Haring. As his work became popular, he opened a store he called Pop Shop in Lower Manhattan selling silk-screened T-shirts and other items featuring his most iconic characters. 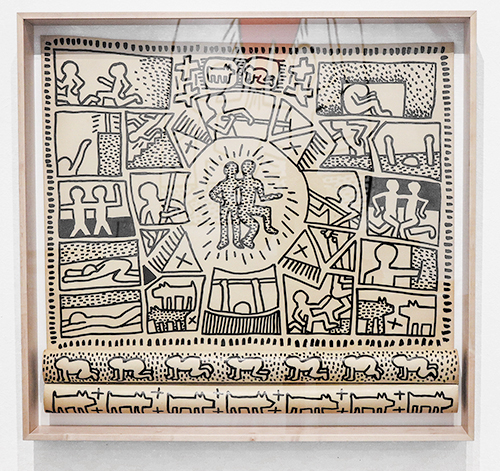 The museum scored this exhibit almost on a whim. While a new museum is being built in Miami to house these and other Haring works from a private collection, the 50 pieces on display are on loan.

Haring painted messages into some of his works. “Stop AIDS,” “Silence = Death” and “Ignorance = Fear” were common themes of his HIV-related works.

He highlighted other issues with his art, too. “Crack is Wack” was the slogan he used in addressing the drug epidemic of the 1980s, and “Free South Africa” was a slogan he used at a time that country was still living under Apartheid.

Not all of Haring’s work was political. An Absolut Vodka ad featuring his art introduced the brand in LGBT media and began a series of ads for the company that continues to this day. But Haring did more than just draw the original ad. He created a series of works featuring the vodka bottle further promoting the brand.

And while Haring’s figures may seem simple, interpretation is in the eye of the beholder. The large enamel-on-white-vinyl centerpiece of the exhibit is an example. The red heart with two figures below it had one obvious meaning to me — love: Two men, one heart. Easy.

Museum officials have been asking people coming into the museum what they think the painting’s meaning is. To some it’s “Hands up.” And while two men from this gay artist was apparent to me, most who see love as the theme don’t necessarily see two men — just two people.

As Haring’s popularity grew, so did his forms of expression. He transferred some of his best-known figures into colorful steel sculptures. One of the first was commissioned for a children’s hospital on Long Island. Video shown at the exhibit shows the children’s delight as the sculpture was installed.

Speaking about his sculptures, Haring said his works had to be “user-friendly.” He said people not only enjoyed his work as art but used those pieces for shade or as a place to sit.

Haring’s work was intuitive. He never painted from a sketch. After beginning, he wouldn’t stop until the piece was completed. A series of 20 sketches displayed in the museum’s mezzanine were completed in one day.

“These drawings were created one afternoon in October in my studio in New York City,” Haring explained in a series of ink-on-paper pages preserved along with the series.

“As usual, they were created instantaneously, without a pre-determined plan or concept,” he wrote. “These drawings are about the Earth we inherited and the dismal task of trying to save it — against all odds.”

That message is even more relevant today than it was when it was written less than a month before he died from complications related to AIDS, in February 1990, at the age of 32.

While Haring is part of museum collections around the world, he’s not included in the collection of any museum in Texas. That makes a visit to the Arlington Museum of Art this summer even more special.

Keith Haring: Against All Odds continues at the Arlington Museum of Art, 201 W. Main Street, Arlington through Sept. 15. The museum is open Tuesday-Saturday from 10 a.m.-5 p.m. and Sunday from 1-5 p.m. Admission is $10 for adults and $5 for students and seniors. Children under 12 are free.