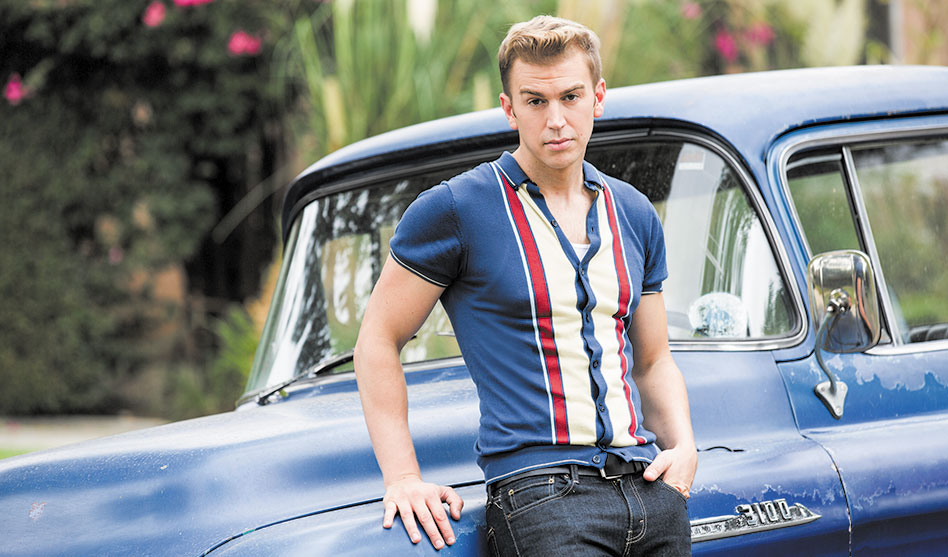 Out singer Spencer Day unites his passion for showtunes and jazz

Ten years ago, pop crooner Spencer Day came out publicly. Following his Mormon upbringing in a small Utah town, his big move away from home in his 20s imbued his creative process. Growing up, he fell in love with both Broadway musicals and the glamour associated with jazz life. After he moved to California — which he did with only $300 in his pocket — Day carved out as a career musician, recently fusing his passions in his new collection of reimagined theater works titled Broadway By Day. We chatted with the singer prior to his North Texas debut at a series of concerts at Casa Manana about how he discovered jazz, his love of glamour and the unique loneliness of being the only gay person you know.

Dallas Voice: Jazz has a reputation for being niche. How important is it for you to make jazz appeal more widely to audiences? Spencer Day: That’s actually my musical mission and goal. I think jazz needs a few things: It needs to get a sense of humor about itself and not be viewed as elitist. Like cabaret — cabaret really should be provocative and very contemporary, but both can kind of get trapped in this museum piece of what good music is and when it stopped being created in 1960, or something like that. To keep it relevant, you have to find a way to relate jazz to what’s going on in the world in 2020.

How do you determine what you want to present to a new audience? We just wrapped up a new project, which is all Broadway songs done in a very unusual way. We selected works not typically done in a jazz singer-songwriter context. I feel like a lot of times, when people in the jazz world do Broadway, they tend to do songs people are already doing. But we’re doing stuff from Annie and A Chorus Line, going full-Broadway, despite me not being a Broadway singer. We’ve found [that] so far that it makes for an interesting pairing. I’ll still incorporate some of my original songs to talk about how my process was inspired by my upbringing. I grew up in a pretty religious town, and we didn’t really have access to anything but G-rated movies — Disney movies and MGM musicals and whatever musicals I could watch on VHS. That kind of informed my songwriting sensibilities [which have] always been informed by musicals. So I think that there’s a real thread.

The name of the basketball team aside, how did a kid growing up gay and Mormon in a small Utah town become interested in jazz music? I was into anything that felt exotic and deep. Like a scene from a movie, I wanted to be anywhere other than Utah in the ’80s. Now I go back and appreciate how beautiful it is, but at the time, I didn’t fit in. As a kid, I loved flamenco guitar, and the first tape that I bought was the Joy of Klezmer. For me, jazz was just another interesting thing. I would draw pictures of the Chrysler Building and martinis. I didn’t know what martinis were, but I knew they symbolized this dark, urbane world that was so far removed from the alfalfa farms that were around our place. It just symbolized the world and became my whole career. But when I moved to California and then New York City, I wasn’t attracted to fame or money. I was attracted to glamour. I had this desperate need to be around color and anything that dazzled you. And to me, that’s what jazz represented.

Did you always want to be a professional jazz singer? What was your plan after high school? I thought about going to school, like BYU or something. But I was clinically depressed and had been for a lot of my childhood. One day, I just packed everything in my car and headed to California. I didn’t know where I was going or what I was going to do, but my mom was very supportive. When I drove off, she just kind of waved, because she knew I was suffocating in this environment and that it wasn’t the path for me.

Was growing up both Mormon and gay difficult? When I was a kid, apart from a few teachers in school who would say [homosexuality] is God’s punishment, my experience wasn’t known by anyone. No one seemed to know anyone who was gay. It’s one thing to have people talk about how you’re going to burn in hell and how wrong it is. But it’s a different kind of suffering to not have it exist for you. You don’t quite know why you feel that way, and it took me a lot of years to learn to love myself.

Were you already out by the time you were doing music professionally? It was definitely a gradual process. I was around people who knew me personally. At age 25, I was in the industry full-time, and though it’s changed so much since then, I had lost an early record deal I know in large part to them finding out [I was gay]. And I’m grateful for that. And it’s because of people such as K.D. Lang and Rufus Wainwright, I could be in the place where I’m today, but I lost a lot of people. To be honest, I feel my career would have ascended more. I know my career has suffered in a sense because of it, but still, I wouldn’t change a thing. I know my comfort as a performer and what’s made me compelling is ignoring everything I had been told growing up and just living my life in an authentic transparent way and not apologize for it.

How do you avoid having your music labeled with your sexual identity? I think that I’ve been lucky that my music has never been fully labeled as “gay” music… whatever that means. But I think it’s still a challenge for any minority group. And I can understand why people want to relate to it that way, because they want to feel like their experiences are mirrored. But there’s no such thing as black music or gay music. I think it’s about making it a nonissue. Being out and being an advocate for that just by being transparent is part of it, and then pulling the focus in your life back to the example you set and never forgetting that it’s ultimately about the work you do.