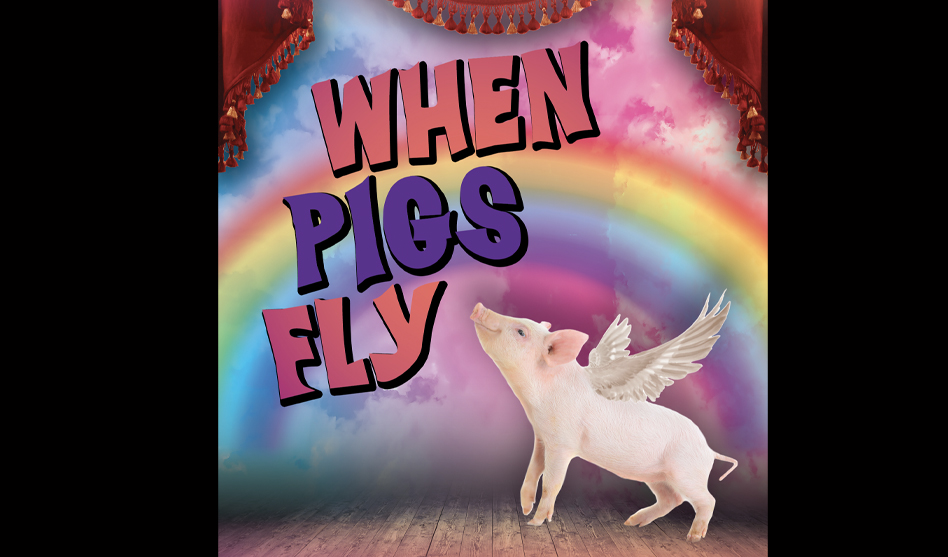 Uptown Players this week announced that the musical When Pigs Fly will be replacing Head Over Heels from theater company’s postponed 2020 season. Co-producer Jeff Rane explained that Head Over Heels is too large a production to meet “pandemic safety protocols that remain in place for professional theaters.”
While Uptown is disappointed to have to cancel Head Over Heels, “We are excited to replace it with an updated version of our inaugural 2001 show, When Pigs Fly” he said. “We plan to present Head Over Heels in a future season.”
When Pigs Fly, conceived by Howard Crabtree and Mark Waldrop, with book and lyrics by Waldrop and music by Dick Gallagher, “entertains with one irreverently outrageous musical number after another.” It tells the story of Howard, who, in a hastily booked theater under renovation, struggles to put on a lavish musical revue over numerous obstacles, including the near-mutiny of his cast, and the nagging memory of his high school guidance counselor who told him he’d succeed “when pigs fly.”
Though the spirit of the show is gay — in both senses of the word — When Pigs Fly is “completely accessible to anyone who can appreciate being smart and silly at the same time,” according to a press release from Uptown. “Just when it seems all is lost, Howard realizes the problem isn’t that he’s gone too far; it’s that he hasn’t gone far enough. The show goes on, and all of Howard’s fabulously sequined dreams come true.”
The production team includes B.J. Cleveland as director and Kevin Gunter as musical director.
Production Information
Uptown Players will continue to follow guidelines from the Center for Disease Control and local health officials in preparing to re-open to audiences this summer. In addition, safety protocols will continue to be coordinated with Actors Equity Association, the union for actors and stage managers, to ensure the safety of patrons, staff and actors.
Specific performance information will be announced in May. Season ticket holders will be able to use their existing season tickets for When Pigs Fly and will be notified when they can call the box office to reserve seats for any of the scheduled performances.
Uptown is still waiting on final approvals from the actors’ union on re-opening dates, so updated schedules for the rest of the postponed 2020 season will be announced in the coming months.