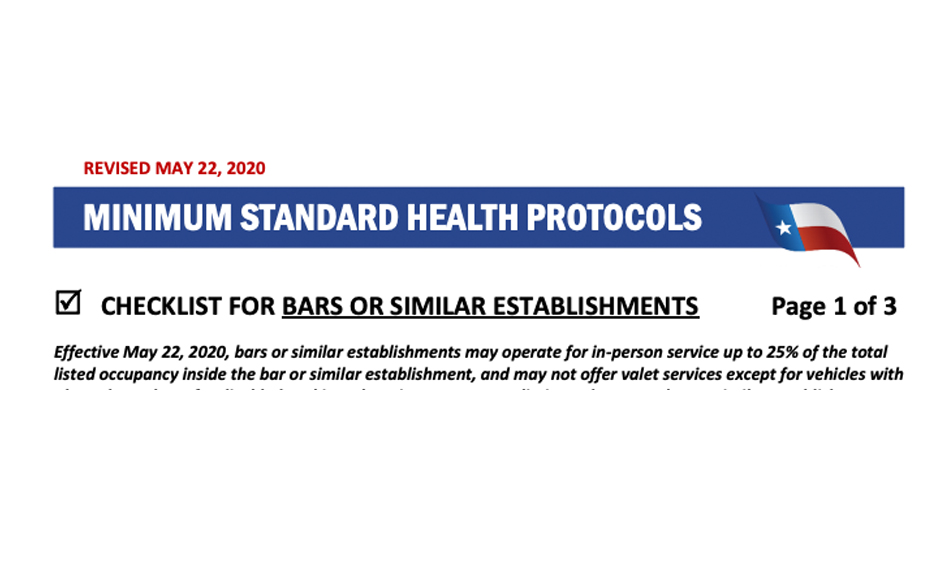 It appears that the Minimum Standard Health Protocols for “bars or similar establishments” issued by the office of Texas Gov. Greg Abbott’s office, intended to help mitigate the spread of the novel coronavirus in bars as they were allowed to begin reopening Friday, May 22 — have changed.

Those standards initially required bar staff to “Physically block off the bar and remove or block bar stools so customers may neither sit nor stand at the bar itself.”

Now, however, it appears that patrons can be allowed to sit a bar. That portion of the protocols, available here in their entirety, now reads: “Take steps to ensure 6 feet social distancing is maintained at the bar between individual patrons, between patrons and waitstaff, and between patrons and bar items such as clean glassware and ice. Such separation may be obtained by ensuring bartenders remain at least 6 feet from customers at the bar, such as by taping off or otherwise blocking bartenders from being within 6 feet of a seated customer, or the use of engineering controls, such as dividers, to keep individuals and/or the bar separate from other individuals.”

A note on the site indicates the protocols were “revised May 22,” and the revised portion is in bold.