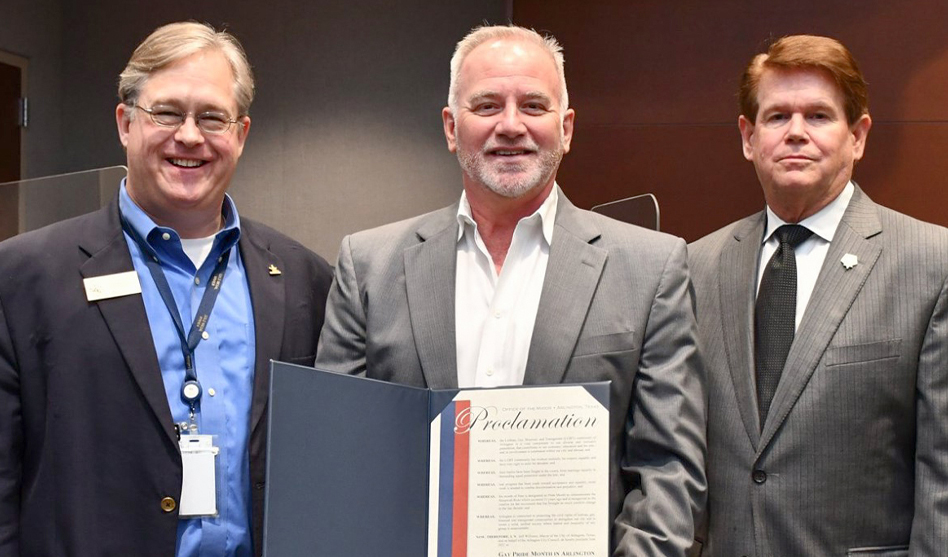 The Tuesday night, June 8, vote came on the first reading of the new and amended ordinances. The changes have to be approved on second reading, which is set for next Tuesday, June 15, before they go into effect. The council also issued a proclamation honoring LGBTQ Pride Month at the Tuesday night meeting,

Arlington resident DeeJay Johannessen, CEO of the Arlington-based HELP Center for LGBT Health and Wellness, was one of the handful of people who spoke in support of the ordinances at the Tuesday, June 8 meeting. He said this week he has been working quietly with city officials for some time to improve policies and ordinances protecting LGBTQ employees and residents.

“Until now, the housing ordinance was the only nondiscrimination ordinance the city of Arlington had,” Johannessen said. “There was no ordinance banning discrimination against anyone in employment or public accommodations.”

Johannessen said he had been fairly confident the amendment and the new ordinance would pass because there had been “a lot of broad community support” expressed by business leaders, representatives of higher education and former council members. Still to see the changes pass on a unanimous vote and without anyone speaking against them was satisfying.

Johannessen noted that he has been working with the city since 2013 to improve its policies regarding LGBTQ residents and employees. Since then, Arlington has gone from a score of 11 on the Human Rights Campaign’s annual Municipal Equality Index to a 63 last year. With the addition of the new nondiscrimination ordinance and the amendment to the housing ordinance, he said, Arlington expects to get a 98 on the next MEI.

But, he noted, the move to amend the housing ordinance and enact the new ordinance is relatively recent. It started after Johannessen sat on the LGBTQ focus group that was part of the city’s Unity Council.

Johannessen said that after the Unity Council report was presented in February of this year, with recommendations on how the city can improve on matters of racial equality, he contacted Councilmember Barbara Odom-Wesley to tell her that while he was thrilled with the suggestions in the report, he was disappointed that it hadn’t gone further.

“I told her that the council had done a great job, but there was nothing in the report about LGBTQ issues. And she said, ‘But this was all focused on race.’ So I asked if the Unity Council was just supposed to be about racial issues, then why was there an LGBTQ focus group?”

Johannessen said that when he point out to Odom-Wesley that the city of Arlington offered no protections against anti-LGBTQ discrimination, she responded, “That has to change. That’s not Arlington.”
And this week, less than four months later, it did change.