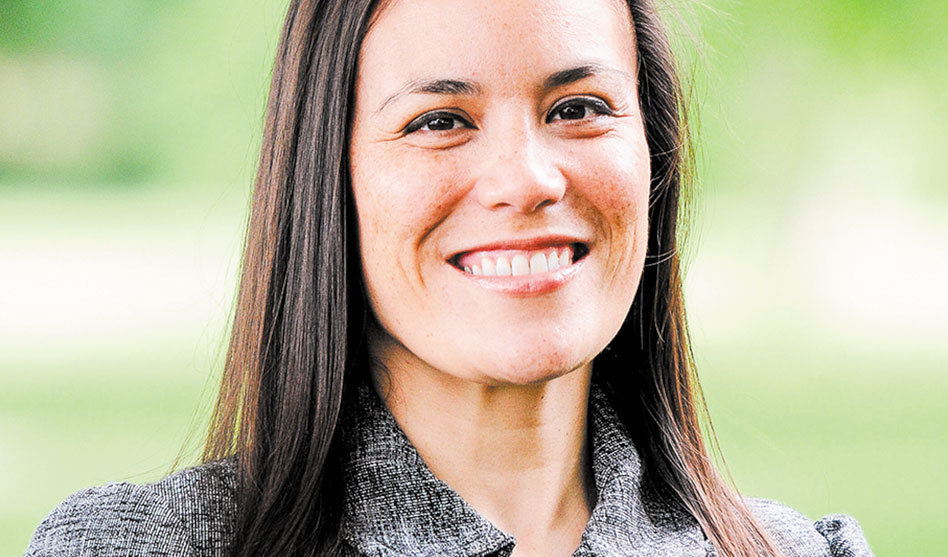 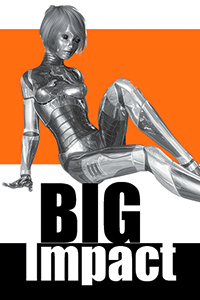 Gina Ortiz Jones served her country in the Air Force; now she hopes to continue that service in Congress

“My Mom came here chasing the American dream,” congressional candidate Gina Ortiz Jones explained. “We were lucky to be born in this very special country.” Jones is running for Congressional District 23, the seat currently held by U.S. Rep. Will Hurd, a Republican. She lost to the Hurd by just a few hundred votes in 2018, but the district leans Democratic and voted for Clinton in 2016. So Jones believes her chances are good this time around. And Hurd isn’t running this time.

But she’s not taking anything for granted.

Although the announcement of her current opponent Tony Gonzalez’s primary win was delayed for weeks by recounts, and she had the advantage of campaigning in person last election, Jones said she’s taking nothing for granted in these days of pandemic. So she hasn’t made any in-person appearances this election since March.
A few weeks ago, with the encouragement of the national Republican Party, Gonzalez’s campaign began using homophobic slurs against her. She has shrugged off the anti-LGBTQ attacks, accusing her opponent of having nothing else to offer.

than responding positively to the gutter politics, Jones said, the voters of District 23 have offered her words of support and encouragement, and campaign contributions have increased.

Jones criticizes her opponent for making only one campaign promise — to do away with “Obamacare.” She said after all this time the Republicans still have no replacement to offer. During a pandemic, she said, 300,000 people in her district would lose their healthcare coverage of the Affordable Care Act were abolished, and that, she said, would be “especially cruel.”

When her mother developed colon cancer, Jones said, she worried that her healthcare costs could bankrupt her family. Instead, she learned, her family had great healthcare coverage, and her mother was treated and recovered.

She notes that her Mom was lucky to have great medical care available nearby. Three of the counties in her district don’t have a doctor, and 18 counties have three or fewer doctors.

The 23rd congressional district is vast, covering 29 counties, stretching from El Paso to San Antonio, and including 820 miles of the border. It is, in fact, larger than the whole state of Georgia and 29 other states as well.

Getting her message out is tougher than it is for most other candidates running for the House of Representatives, Jones said, since her district covers four media markets and she must get her message out in both English and Spanish in all four markets.

But even after a short chat with Jones, it’s obvious she disciplined, has goals for her district and has a plan to get her message out. That something she learned in the U.S. Air Force where she served as an intelligence officer under “don’t ask, don’t tell.”

“One of the first things I had to do was sign a paper that I wouldn’t engage in homosexual activity,” she recalled, describing “don’t ask, don’t tell” as “an awful policy and so unfortunate.”

Jones’ service to country didn’t end with her military career. After leaving the Air Force, she served as director for investment at the Office of the U.S. Trade Representative under the Obama Administration.

“My oath to defend the Constitution shaped my dedication,” she said, adding that just because she left the Air Force her oath was not broken.

Among her goals for her district is investing in infrastructure — and that infrastructure doesn’t include border walls. Chief among her projects is access to the internet, she said, noting that “Lack of broadband makes vulnerable communities more vulnerable.”

When schools closed down last spring because of the COVID-19 pandemic, and children were sent home, lack of access to the internet made it difficult for many kids in District 23 to transition to at-home learning, she added.

And while many doctors across the country began treating their patients primarily with telehealth, something that should have benefited those especially in counties in her district with few or no doctors, lack of broadband continued to prevent them from accessing healthcare during the pandemic.

Jones blamed that lack of necessary infrastructure on a leadership problem.

She also said she’d like to “double down on energy investments,” especially in renewable energy. Not only is that environmentally sound policy, but, she added, would provide jobs.

With her background in national security and intelligence, Jones believes the best way to secure the border is by developing “pragmatic foreign policies that invest in solutions to strengthen our neighboring countries.”

And as a first generation American, she supports “responsible immigration reform” that she describes as “welcoming immigration policies.”

Elliot Imse, director of communications at the LGBT Victory Fund, said Jones has been doing the groundwork since her narrow defeat in 2018.

“This is one of the most important races in the country for our community,” he said, calling the candidate authentic, brilliant and empathetic. “She would go into Congress with the interests of ordinary people in mind,” he continued. “She’ll be a strong voice in changing hearts and minds about LGBT issues.”
Victory Fund CEO Annise Parker called Jones “Smart, tough and effective,” saying her national security experience is something that will benefit the country. 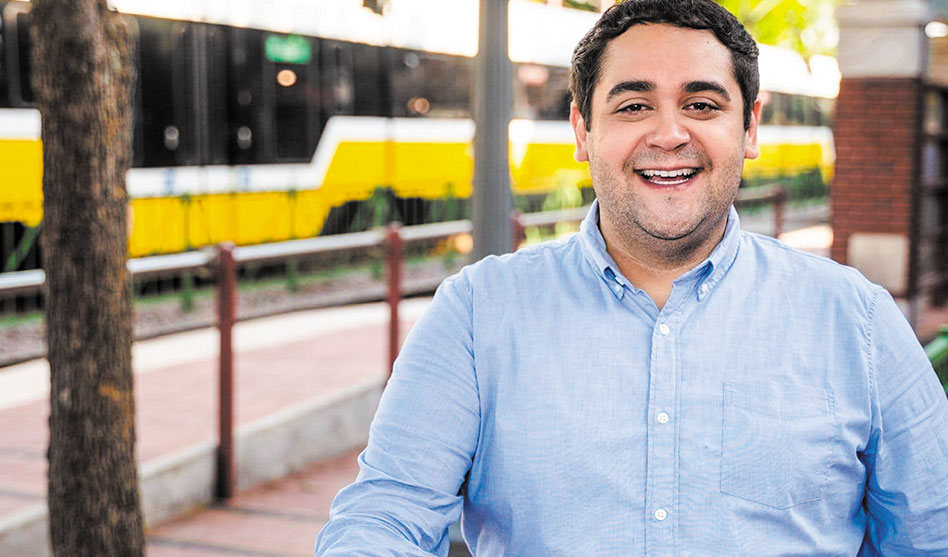 Lorenzo Sanchez jumped into the race for Texas House District 67 in Plano in early 2019, and that may have given him an edge over his Democratic opponents because he had a year to knock on doors and attend events to meet constituents in person before the novel coronavirus pandemic hit.

Sanchez pointed out that his opponent, incumbent Republican state Rep. Jeff Leach, supported the anti-transgender bathroom bills in the 2017 legislative session, adding that he didn’t think that was the issue people in Collin County cared about these days — especially during the COVID crisis.

Instead, Sanchez is running on an education platform.

Sanchez, a first generation American, was born in Chicago, living in what he called a dangerous neighborhood there. His mother — an abuse survivor and a cancer survivor who often went hungry to provide for her children — relocated the family to Plano where they could get a good education, he said

Campaigning during the pandemic is difficult. But before the COVID crisis began, Sanchez amassed the largest grassroots volunteer team in Collin County history, he said. Since the shutdown began, he’s transitioned volunteers to keep voters engaged by working precinct by precinct. He said voters and volunteers are telling him there’s an urgency about this election.

“Some voters are super engaged,” he said. “A subset are looking to be inspired, and others are just looking for a pathway out [of the current mess].”

Sanchez calls himself a product of the community and, he points out, his district is one of the most highly educated in Texas. He used a college in his district as an example of why that matters. UT Dallas is one of the best schools, in the country for LGBTQ students according to the Princeton Review that ranks schools.

And still, he said, “my opponent is pushing bathroom bills. That’s just one reason Texas Monthly named him one of the worst legislators in the state.”

But there is more than just education at issue. Plano is attracting large business relocations from around the country, and an anti-LGBTQ platform is bad for business.

“The companies that move here don’t want their employees discriminated against,” Sanchez said, adding that representation by people like his opponent will discourage business relocations in the future.

On gun violence, Sanchez pointed out that the El Paso shooter came from his district, and that gunman could have chosen any Walmart right here along Highway 75.

“One of my volunteers almost knocked on his door,” he said.

Sanchez said he believes in safety while respecting people’s rights. That’s why he supports what he calls a common-sense approach to gun legislation: background checks, a red flag law to keeps guns away from people likely to harm themselves or others and a limit to the size of magazines. He also favors gun safety classes for gun owners.

Sanchez said there’s a lot of anxiety related to the COVID crisis. “Families don’t know what they’re going to do next month,” he said. “Send kids to school? We don’t have calming leadership.”

He said some Collin County mayors are doing the right thing, but their message of protecting yourself by wearing a mask is being contradicted by county leaders.

Meanwhile, Sanchez’s well-funded opponent is making attacks on Sanchez’s calls for protecting the environment, calling that a job killer. But Sanchez said his proposal to create wind farms in the area is a job creator for windmill installers and turbine manufacturers as well as an income generator for families who lease their land to renewable energy companies.

Sanchez also said he supports expansion of Medicaid to provide healthcare to as many people as possible. He mentioned that his mother is in remission from cancer and that he has a niece with epilepsy.

“That’s who I’m fighting for,” he said, “them and a lot of teachers who made sure I was successful.”

LGBT Victory Fund CEO Annise Parker said Sanchez had a very competitive primary and called his general election campaign an uphill battle. “In order to win, he had to learn how to campaign,” she said.

But, she added, Sanchez has a compelling story although he has had to introduce himself to voters in a tough year for campaigning. He’s got a great team in place, Parker said, and while the district leans Republican, victory is within his reach. Sanchez pointed out that Beto O’Rourke won a majority of votes in his district and, with a large turnout, is optimistic about his chances in November.