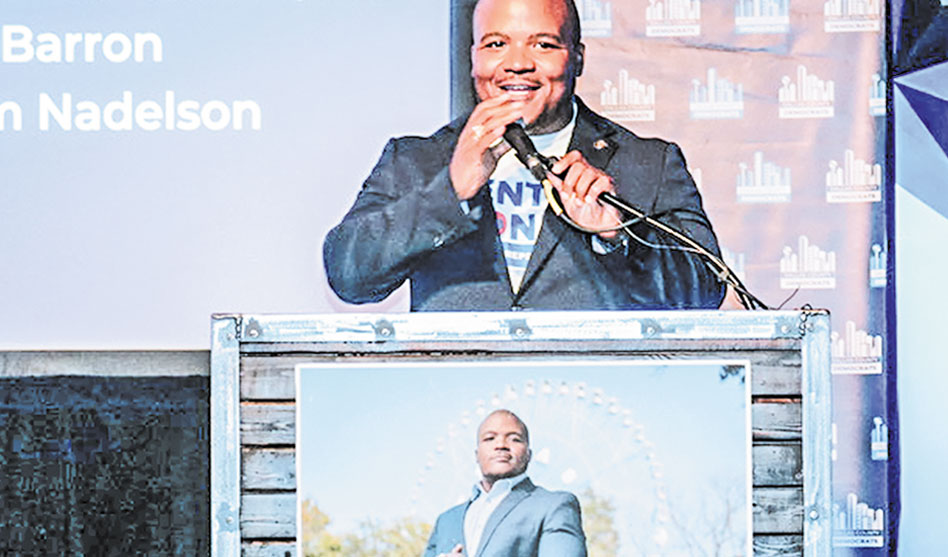 Here in North Texas Julie Johnson fended off a serious challenge in her re-election bid in District 115. Jessica Gonzalez ran unopposed in District 104 and will return to the Legislature for a third term. With Venton Jones’ win, the LGBTQ Legislative Caucus grows to three members from Dallas County. 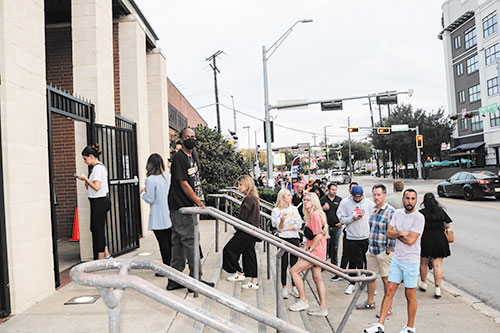 The line of people waiting to vote at the Oak Lawn Library, above left, wrapped around the block. Venton Jones, above right, delivers his victory speech. (David Taffet/Dallas Voice)

After Rep. Eddie Bernice Johnson announced her retirement after serving 30 years in the U.S. House of Representatives, she threw her support behind District 100 legislator Jasmine Crockett. That left an open seat in the heavily Democratic area.

Five candidates entered the primary. Of those, only Sandra Crenshaw, a former Dallas City Council member, had much name recognition. Among the others, Jones made it into the runoff against Crenshaw. Democrats rallied around him, and he made it to the Election Day ballot.

Although he drew no Republican opposition, Joe Roberts ran on the Libertarian ticket. With 76 percent of the vote in as of press time, Jones received 85 percent of the ballots cast and had been declared the winner. 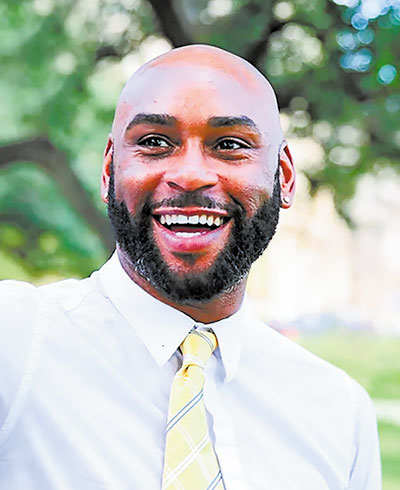 Johnson won her first term in office in an upset victory in 2018 against anti-transgender “Bathroom Bill” author Matt Rinaldi. This year, challenger Melisa Denis hoped to reclaim the seat for the Republican Party. But as of press time, Johnson led the race with 56.9 percent of the vote for her northwest Dallas County seat and will return to Austin for a third term.

A fourth LGBTQ legislative candidate in the DFW area, Shannon Elkins, challenged Republican incumbent Giovanni Capriglione for a Tarrant County seat based in Colleyville. The political newcomer received 33.7 percent of the vote.

Despite some losses around the state and one member — Celia Israel — who decided not to seek re-election, the number of LGBTQ members of the state House will grow. The dean of the LGBTQ delegation, Mary Gonzalez of El Paso, was re-elected with 76 percent of the vote against a Libertarian challenger.

Austin area incumbent Erin Zwiener drew a Republican opponent trying to unseat the Legislature’s first out bisexual member. But Zwiener retained her District 45 seat with 59 percent of the vote.

And both Houston LGBTQ incumbents — Ann Johnson in District 134 and Jolanda Jones in District 147 — were re-elected. Johnson, who represents Houston’s Montrose gayborhood, received 61 percent of the vote. She’ll return for her second full term. Jones, who joined the House after a special election held earlier this year, ran unopposed and returns for her first full term. 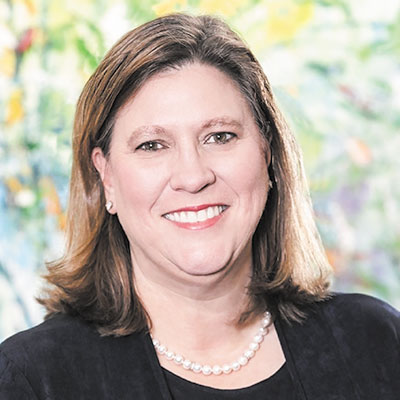 The final LGBT Caucus member, District 50 incumbent Celia Israel, did not seek re-election. Instead she ran for mayor in Austin and advanced to a runoff for that office.

With six (out of seven) returning incumbents and the addition of Jones and Hayes, there will be a record eight LGBTQ members of the Texas House.

Three additional LGBTQ candidates around the state — Nelvin Adriatico, Madeline Eden and Justin Calhoun — lost their races. Josh Tutt, from Burleson County in Central Texas, lost his challenge to Republican incumbent Sen. Lois Kolkhorst. Had he won, he would have become the first out Texas state senator.

In her race to become Austin’s first out mayor and the country’s first Latina mayor of a major city, Israel garnered the most votes in a six-way race to replace term-limited Mayor Steve Adler. She didn’t hit the 50 percent of the vote needed for an outright win, however, so she’ll face second-place finisher Kirk Watson in a Dec. 13 runoff.

Watson is a former Austin mayor and former state senator. He outspent Israel almost 4-to-1. His campaign spent more than $1 million, while Israel spent $288,000. 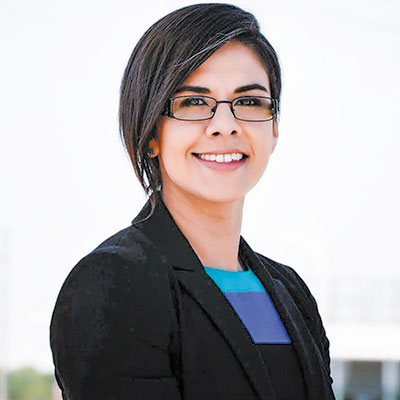 In an interview with Dallas Voice, Israel explained she would use city-owned land and what she called “dead parking lots” to develop more residential units. She would also reduce the number of required parking spaces to both increase land available for housing and encourage use of public transportation.

Mary Jo Woods received 33 percent of the vote in her challenge to Republican Rep. Pete Sessions. Sessions, a former Dallas congressman who had the seat now held by Rep. Colin Allred, moved to a very red Waco district.

And, in a district that runs from Austin to San Antonio and west past Kerrville, Claudia Zapata challenged incumbent anti-vaxxer Rep. Chip Roy. She received 37 percent of the vote.

Democrats — both LGBTQ and allies — did well in Dallas County. Among those allies, Crockett was elected to EBJ’s seat with almost 80 percent of the vote. State Rep. Rafael Anchia, whose district includes Cedar Springs Road, received 75 percent of ballots cast in his race. And around the county, state Reps. Terry Meza, Ana-Maria Ramos, Victoria Neave and Yvonne Davis, all strong allies, sailed to victory. Colin Allred, another ally in Congress, also won his reelection race. 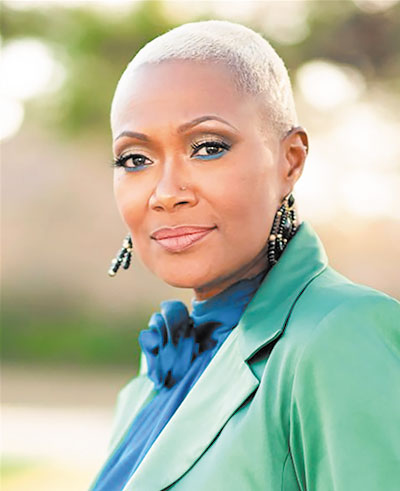 County Judge Clay Jenkins led a Democratic sweep of all county positions. Democrat Andrew Sommerman beat incumbent J.J. Koch for the only county commissioner position currently held by a Republican. The remaining two Republicans in Dallas County government — a justice of the peace and a constable — also were replaced by Democrats.
And LGBTQ voters made a difference in Dallas. The Oak Lawn Library was the county’s top early voting location, and, on Election Day, lines there wrapped around the block.

Statewide, results told a different story. Gov. Greg Abbott won his race against Beto O’Rourke by more than 10 percentage points — more than even the governor’s most optimistic polls projected. O’Rourke did lead in the state’s four largest counties — Bexar, Dallas, Harris and Travis — as well as 28 border counties.

Indicted Attorney General Ken Paxton received 53 percent of the vote and won a majority in all but 20 of Texas’ 254 counties. He received almost a million more votes than Rochelle Garza.

Garza led in Travis County as well as Williamson and Hays counties to the north and south of Austin. She carried Harris County as well as Fort Bend County to the southwest. But Dallas was a blue island when it came to the attorney general race. Tarrant, Collin, Denton, Rockwall, Kaufman and Hill counties all stuck with Paxton.

The rest of the statewide races were just as dismal for Democrats. Lieutenant Governor Dan Patrick received close to a million more votes than challenger Mike Collier. Land commissioner, treasurer and other races all went to Republicans by 10 point margins.

In U.S. House races, Texas gained two seats due to population growth. Each party picked up a seat. The current

Proposition A passes in Dallas

$1.5 billion will buy renovations at Fair Park and a new convention center

Proposition A passed in the city of Dallas with 70 percent of the vote. The $1.5 billion bond package will rebuild the Dallas Convention Center and fix six Fair Park facilities. 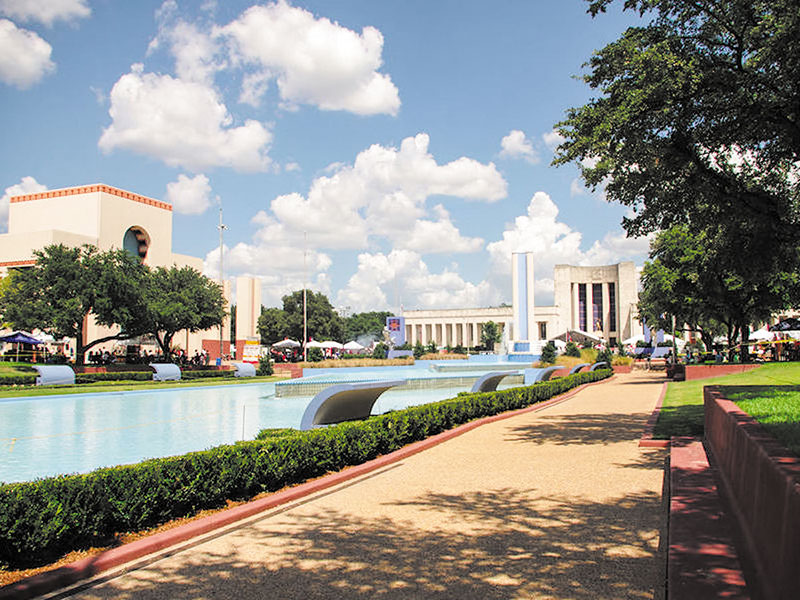 Currently, the hotel tax in Dallas is 13 percent. That will increase to 15 percent to pay the bonds off.

At Fair Park, renovations and restorations will be made to the Centennial and Automobile buildings. A cover will be added to the Bandshell.

The Coliseum will get new restrooms and concessions, and new construction will allow visitors to get from one side of the arena to the other without going outside.

The Cotton Bowl needs new locker rooms and will also get luxury suites and club seats. The press box will be moved and some structural issues will be addressed.

Fair Park Music Hall will get some needed renovations. Details on which problems will be addressed in this round of upgrades are still being decided.

The upgrades at Fair Park will allow the facilities to be booked for more events. The Coliseum will mainly attract sporting events, while the Cotton Bowl will host more concerts as well as sports events. The Bandshell’s new cover is expected to increase the number of live performances happening there. And the exposition buildings, currently the home of Dallas Pride, will be able to offer a variety of exhibits and festivals after renovations.

To cause the least disruption, construction will take place at only one facility at a time.

Most of the Dallas Convention Center will be replaced, thanks to bond funds. When completed, all that will remain of the old center will be the original building that now houses the Black Academy of Arts and Letters.

If not replaced, the current building would need about a half billion dollars in repairs.

The new convention center is envisioned to be a mixed-use entertainment district. Long-term plans are for the complex to include a deck park over I-30 that will connect with the high-speed train to Houston.

Downtown Dallas Inc. President and CEO Jennifer Scripps said, “The DDI team has been working with our partners at City Hall on the Kay Bailey Hutchison Convention Center master plan for years. We are excited to continue the important work of designing and building a new walkable, vibrant, mixed-use entertainment district that will create thousands of new jobs and generate millions of dollars in economic development, as well as attract new visitors and residents for decades to come.”

The new facility will be built along Lamar Street. Plans are still being drawn up, and construction is not expected to begin until 2024.