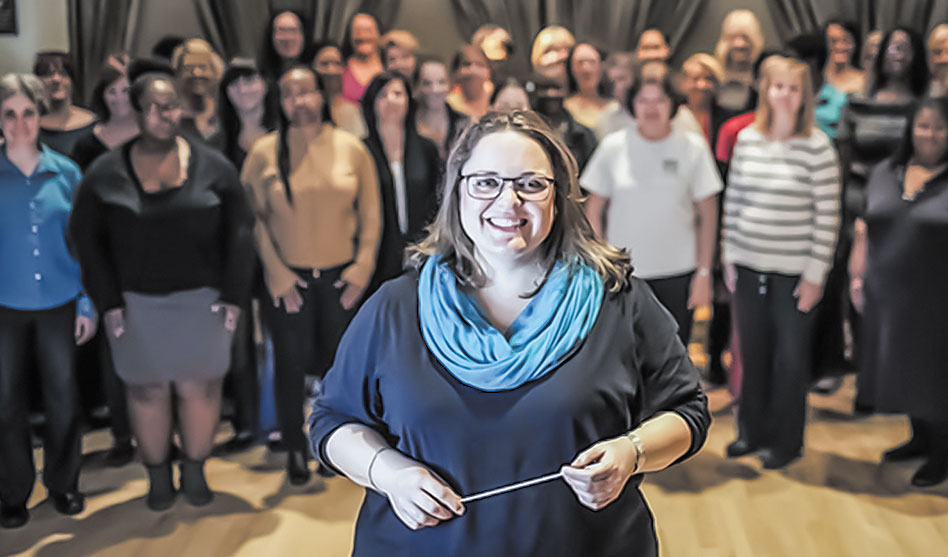 Melinda Imthurn with The Women’s Chorus of Dallas

After two years of downtime, The Women’s Chorus of Dallas returns with some ambitious goals

The pandemic has been hard on all arts organizations,but particularly on choruses. The Women’s Chorus of Dallas Artistic Director Melinda Imthurn said her singers took off their masks in March and are anxiously looking forward to their upcoming concert, Divas.

The music will be performed by the full chorus, small ensembles and soloists.

“This concert’s just for fun,” Imthurn said of the event.

The already sold-out concert takes place at the Sammons Center for the Arts on Harry Hines at Oak Lawn on Saturday, June 4, and will be combined with a fundraiser. Guests will enjoy desserts and beverages from Lakewood Brewing Company, gourmet popcorn from Avery’s Savory Popcorn, a photo booth by Picture This and a silent auction. 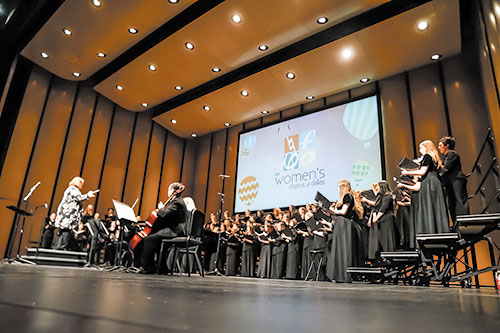 The Women’s Chorus of Dallas performs.

The Pride weekend show will be hosted by Raquel Blake.

Imthurn said the last two years have been very difficult for the chorus. Concerts were virtual and stitched together by an AV editor, a position she had to add during the pandemic. Each singer recorded herself singing to the music track, and then the voices were layered, one singer at a time. Then the video went through the same process.

Conducting the chorus virtually was an additional challenge since the singers’ mics were turned off. So Imthurn conducted, but she couldn’t hear the sound. Even a soloist couldn’t perform, because the voice wouldn’t synch with the instrument.

In addition, the chorus lost the camaraderie of singing together as well as the acoustic sound that comes from choral singing.
Imthurn said the chorus is in rebuilding mode after losing two years of auditioning and adding new singers to the chorus. With that time lost, you would think she’d add any new voices that came along, but she employed a different strategy.

About 10 new voices have been added to TWCD this spring.

“We have a very strong group of new singers,” she said.

From among those who’ve applied to join the chorus, Imthurn added those who read music and already have vocal skills. Some are music educators; others have experience performing.

But when she realized what a difference a background in music could make for chorus members, the educator in Imthurn jumped in, and she’s creating classes in reading music and in vocal skills for potential and current chorus members would like to develop their music skills.

While the Turtle Creek Chorale is coming out of the pandemic with a performance on July 9 at Carnegie Hall in New York City that should give that group good momentum, the Women’s Chorus had just performed at the famed New York concert hall when the pandemic brought things crashing down. Imthurn hopes the new season she has planned will give the group new momentum.

She has a line-up of more new singers who would love to join the chorus. And travel always adds excitement: The chorus is scheduled to sing at the Tapestry International Festival in Vancouver next May.

In addition, the chorus has commissioned some new works for the season.

Moving forward, Imthurn’s goal is to branch out and explore different musical genres more deeply rather than just performing what she called token pieces.

She said most musicians are trained in “old, white European music. I’m having to learn” so the chorus can perform music from Africa more authentically and perform spirituals with the emotion they evoke. Imthurn said she wants more people to see themselves represented on stage.

But can she learn what she wasn’t originally trained to do? “I wasn’t trained to do videos,” she said, but that didn’t stop her from learning how and using those new skills to keep the chorus going during the pandemic.

So maybe the downtime of the pandemic will result in even better music and a broader selection of music than ever, performed by the best group of singers the Women’s Chorus has ever presented. At least, that’s Imthurn’s goal.