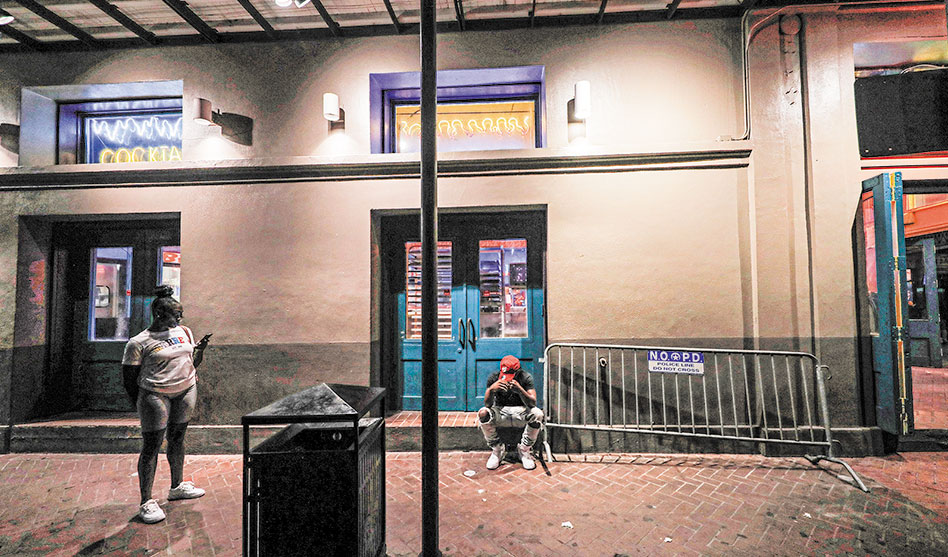 Tourism is the lifeblood of New Orleans, especially the French Quarter. But the ongoing COVID-19 pandemic has hit the city hard, as this picture of a near-deserted French Quarter street in July shows. The pandemic has left many unemployed and struggling to pay rent and mortgage payments. The city’s transgender and gender-non-conforming residents often struggle during the city’s best times, but they are seeing hope in a new project called House of Tulip.
(AP Photo/Gerald Herbert)

NEW ORLEANS — A group of advocates in New Orleans has raised more than $400,000 to create what will be the city’s first home for transgender and gender-non-confirming people who are experiencing homelessness.

The project, called the House of Tulip (Trans United Leading Intersectional Progress), is believed to be the first of its kind in the U.S., according to Mariah Moore, a co-director of the organization and a national organizer for the Transgender Law Center.

The group is finalizing the purchase of a multi-unit home near the Treme neighborhood in downtown New Orleans that will provide living space for up to 12 people at a time. Moore explained that unlike other forms of shelter, the home would not impose specific requirements or restrictions that would limit who could access living space.

“Some places say you have to be navigating sobriety or living with HIV, or they place a restriction on the amount of time you can stay,” Moore said. “We want to think about all of that and how it can be harmful.”

The group is aiming to have the house ready and available by next spring.

House of Tulip was the brainchild of Moore and fellow activist Milan Nicole Sherry, who co-founded BreakOUT!, an activist organization in New Orleans that supports LGBTQ youth.

New Orleans was hard hit by the COVID-19 pandemic early on. The city’s largely tourism-based economy has yet to recover leading to high rates of unemployment and a mounting housing crisis.

But even before the pandemic hit, about half of renters in the city were already living paycheck to paycheck. More than half were paying more than a third of their income on housing, according to a study commissioned by the Greater New Orleans Housing Alliance in 2018.

Growing up in New Orleans as a transgender woman, Sherry said she had experienced housing instability even as an adult. As the fallout from the pandemic gripped her city, she worried about the more vulnerable members of her community.

“For a lot of trans folks, housing is a matter of life or death,” Sherry said. “They have to engage in survival sex work for a place to stay, and violence comes along with that. There are so many girls this year alone that we have lost.”

The Human Rights Campaign lists at least 28 trans and gender-non-conforming people who have died violently so far this year in the U.S. The majority of those cases involved Black trans women, noting in a statement that they have not seen such a high number at this point in the year since advocates started tracking these cases in 2013.

And it’s likely that there have been more cases since many of these murders are either misreported or go unreported.
Worried about the impact the pandemic would have on their community, Sherry and Moore, along with other advocates, mobilized and raised $20,000 to support trans and gender-non-conforming people in New Orleans who needed help paying rent and bills.

“Housing was the main worry we kept hearing about over and over again,” Sherry said.
While there are a handful of housing options in New Orleans for people experiencing homelessness, many come with specific restrictions and requirements. Some shelters, for example, are only available to people who are HIV positive, or specifically for single mothers, or people who are newly sober.

“We know these barriers prevent someone from seeking help. You would be surprised what people will do to meet those conditions. I have seen young people willing to contract HIV to get into housing,” Sherry said.

The 12-bedroom TULIP home, once open, will be available to any transgender or gender-non-confirming person experiencing homeless for as long as they need, Moore said.

Some people may need the space longer than others, she added. Awareness around this long-term need is one reason the group aims to acquire a second property and find pathways to home ownership for community members.

“We want to expand to have many Tulips across New Orleans,” Sherry said.