Trump’s failed response to the coronavirus

Public Service Announcement: Wash your hands — more than you already do. And get yourself a bottle of rubbing alcohol and some cotton balls and swab down your phone on the daily.

As an expert on disease transmission recently said on “This Podcast Will Kill You,” there is definitely poop on your phone.

So. Coronavirus. Not good. But also not something to panic about. At least, not yet.

Who knows? Maybe it will be the thing to wipe out civilization. But when you watch Donald Trump telling his brainwashed supporters at a rally in South Carolina that the coronavirus is a hoax — well, you can’t say we didn’t have it coming.

Speaking of brainwashed supporters, on Feb. 28, U.S. Sen. Marco Rubio, R-Fla., tweeted, “Once upon a time, when politics & media was inhabited by normal people, a viral outbreak was treated as a public health matter. But now even an infectious disease caused by a virus, a submicroscopic infectious agent, is a domestic partisan political issue to exploit. Crazy.”

Self-described “mouthy gay” Steve Kenson had the perfect response: “As a gay man who came of age during the AIDS era of the 1980s,” he tweeted, “I’m intensely curious for you, a Republican senator, to tell me more about how virus outbreaks were once handled apolitically.”

It took President Ronald Reagan until 1985 to even say “AIDS” publicly. By then, according to NBC News, more than 12,000 people had died.

In 1982, Reagan’s press secretary Larry Speakes laughed when asked about AIDS at a press conference. The reporter referred to it as “gay plague,” to which Speakes replied, “I don’t have it, do you?” And everybody laughed.

Reagan’s religious-right supporters like Jerry Falwell were declaring that AIDS was God’s punishment for homosexuality. Reagan didn’t want to lose that sweet right-wing support by seeming to give a shit about gays, so he just let people die. 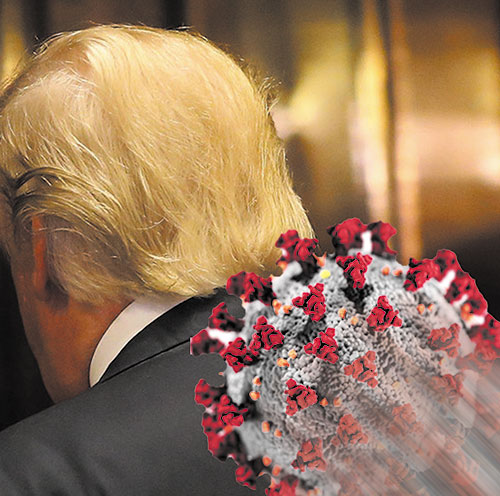 Are those the “normal” people who inhabited politics and media that Rubio was talking about?

I mean, I’ll give him the fact that there are people who are definitely not normal in politics right now. Chief among them is Trump, who believes that the virus will magically disappear once the weather gets warmer in April.

Trump can’t assure the nation that the government has this coronavirus thing under control, because 1. it doesn’t, and 2. Trump is only concerned about himself and remaining in power.

And then there’s Mike Pence, Mr. Coronavirus Task Force, who exacerbated an HIV/AIDS outbreak in Indiana when he was governor there, because he needed to take time to pray on whether or not needle exchange programs were a good idea. He also believes that electrocuting people will turn them heterosexual and that science is dark magic.

The Trump administration is actively trying to prevent the release of factual information about the coronavirus to the public and seems mainly concerned with the stock market rather than public health. Meanwhile, Trump is calling news agencies that report on the virus fake news.

That said, the news media’s coverage of the coronavirus outbreak is problematic at best. The breathless coverage of every single new confirmed case and every death are much more likely to inspire panic than precautions.

But even if this doesn’t become the next flu pandemic of 1917, what’s truly terrifying is that we have a woefully incompetent crime syndicate running the show. As a country, we are not prepared, because our government is headed by the dumbest man in America.

And he’s also a liar. On Last Week Tonight, John Oliver took Trump to task for ignoring or contradicting his own health experts, often in real time. “Your experts just said cases will go up, and you said they would go down,” Oliver said. “You can’t just ignore real numbers and pick out ones you like better.”

And instead of focusing on Trump’s lies and incompetence, much of the media is proceeding as if things were still normal.

But things are not normal.

Are we all doomed? Well, only time will tell when it comes to coronavirus. But we can’t keep on going on as a country with this administration in charge.

Trump may be fighting any connection to the outbreak response right now, but chances are, if the numbers of infected and dead get huge enough, he’ll be more than happy to take credit for anything seen has helping curb the outbreak. And at least Rubio will Tweet some more Bible verses and Pence will pray for you.

And, once again, wash your hands, cover your coughs and sneezes and swab that cellphone. You know where it’s been.