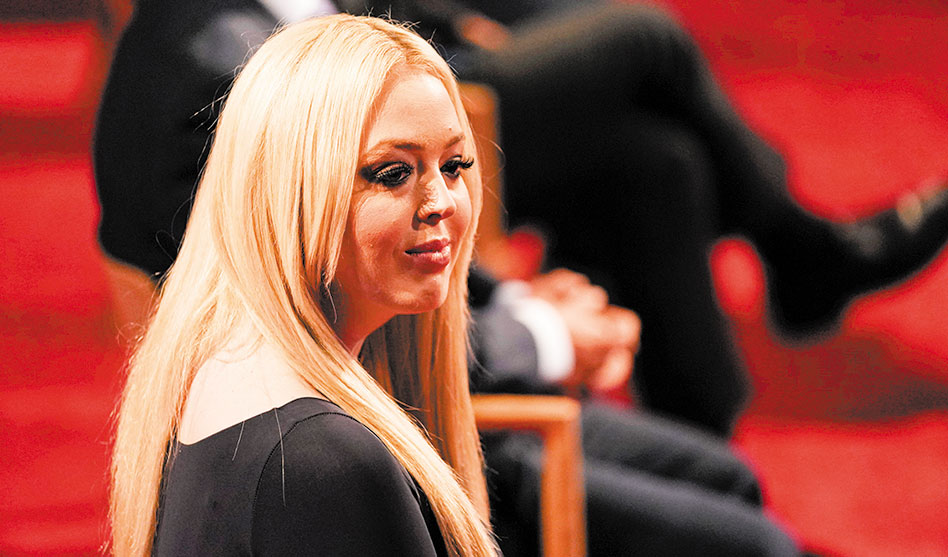 Yet another Trump kid claiming Daddy loves the gays

The Trump administration is the most anti-LGBTQ administration in history. So the fact that there was a Trump Pride event is insulting all on its own. But Tiffany Trump’s rambling speech at the event added to the insult.

“It’s such an honor to be here and speak truthfully, honestly and from my heart,” Tiffany said to the small group of people gathered for the event in Florida. There were more red hats than masks.

“I know what my father believes in. Prior to politics, he supported gays, lesbians, LGBQIA+ community,” she said at the event, throwing her hands up in an expression of exasperation. “Okay?”

Was leaving out the “T” in that string of letters intentional?

Then she said that her best friends are gay, and that notions that Trump doesn’t support this community are “fabricated lies.”

“My dad cannot be bought off. He’s not going to let anyone change his views,” she continued to applause and without any apparent irony.

“And I’m praying that you all see that.”

Tiffany went on, “My mom’s here in the audience,” and Marla Maples stood up in the front row and waved and blew kisses to the crowd.

Tiffany mentioned that her mom used to perform on Broadway, because there’s lots of gays on Broadway.

“Unfortunately, one of her best friends passed away from AIDS. And what I think is so powerful is when my father says that he is going to” — she caught herself before she said that her dad will cure AIDS — “that there will be a cure in the next 10 years, there will be, and God bless.”

She pressed her hands together in prayer and bowed.

Never mind the fact that in June 2020, Trump erroneously said that scientists have “come up with the AIDS vaccine,” because he’s a moron.

Is it possible that there will be a cure for AIDS in the next 10 years? Maybe. But it won’t be because of Trump, a man so deeply distrustful of science that he’s let more 225,000 people die of COVID-19 on his watch.
His COVID-19 response plan consists of holding mass gatherings of unmasked people and calling the media “dumb bastards” for their continued coverage of this pandemic that is only going to get worse as the weather gets colder and people move indoors for most activities.

Tiffany bragged that her dad was the first president to appoint an openly-gay person to a cabinet level position, referring to his appointment of Fox News commentator Richard Grenell to acting director of national intelligence. Keeping in line with Trump’s personnel picks, Grenell had no national security experience before assuming that position. Grenell was appointed because he’s a Trump loyalist not because Trump is loyal to gays.

Tiffany then lamented the fact that there are “so many people against us,” and by “us” she means the Trump family. She is not talking about the many persons against LGBTQ people who have been emboldened by this administration.

Donald Trump has done none of these things. For one thing, he IS the establishment in that he’s a rich guy looking out for other rich guys.

This idea that he’s taken on big pharma is also a joke. Instead of fighting for health care for more Americans, he is suing to undo the Affordable Care Act which would result in millions of Americans losing insurance during a pandemic.

Trump did try to ban TikTok, so that’s something, right? Oh, and the deep state is a right-wing conspiracy theory claiming that Obama has secret folks imbedded in the federal government to bring down Trump.
If only.

“The Democrats have pretty much attempted to always control who you, we are supposed to vote for one way or the other,” Tiffany said, using air quotes around “you” and “we.”

“I wouldn’t lie to you, I promise,” she said before adding that she didn’t bother to prepare any remarks for the event, which sums up her family’s credibility and work ethic perfectly.