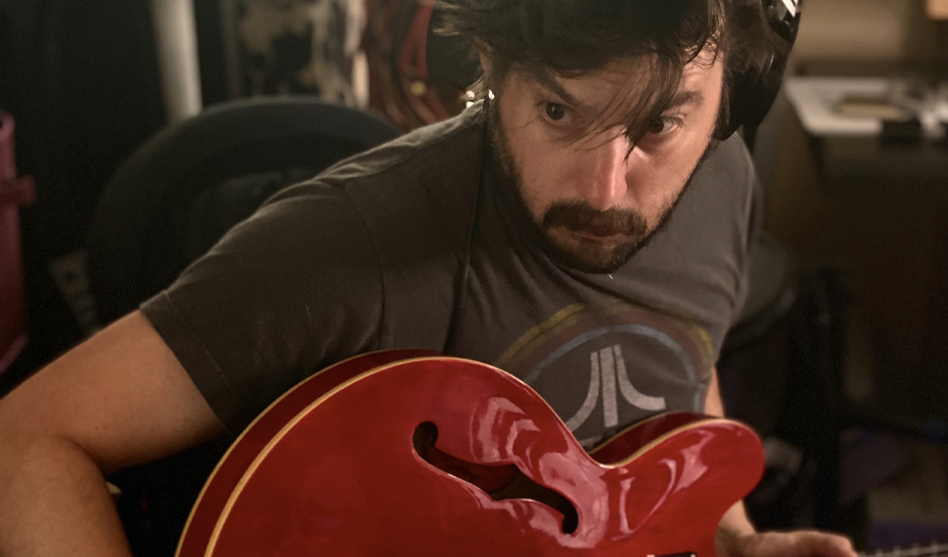 For its new season, Second Thought Theatre has opted to not yet return to the stage with its opening show. For Goat Song, this works in the theater’s favor. The one-man show, which closes this weekend, is a fascinating watch as the character journeys into an emotional descent.

Written by Matt Harmon, the show centers on Marcus Weeks, a singer-songwriter who has a successful debut album and is promoting new music via a Facebook Livestream, sponsored by a corporate giant.

As Weeks introduces the event and tells his online fans he’ll only play new music, the descent starts immediately.

Directed by Caroline Hamilton, Drew Wall masterfully embraces Weeks as the type of musician who clearly has something to prove despite his success. He brushes the character with strokes of both confidence and insecurity as the graphic Facebook chat, thumbs-ups and hearts flutter and flow through the show.

Whether by design or not, the graphics almost navigated the emotions of Weeks’ phases. They started off enthusiastically, as did the character, and when the fans online start to bitch about his new music or keep requesting his previous music, notably the title song, irritation sets in with the character.

When one fan mentions his previous band, Weeks stops the concert to face issues he had with a bandmate.

Wall’s portrayal is quite moving as his character grieves over this former bandmate. He plays it so delicately that the viewer may wonder: Was Weeks’ relationship with the guy more than meets the eye? Clearly, there was a closeness and competitiveness between the two, but Wall unfolded emotions that blurred so many lines.

In less than an hour, Wall takes his character on an epic emotional journey that wasn’t sad to watch; it was instead more disturbingly voyeuristic. Everything about the production looks (and really is) like the viewer is sitting in Weeks’ home, watching his downward spiral. That is also reflected in the graphics as the chat and the likes goes silent and the viewer jopins the imaginary fans in watching a man basically lose himself.

Harmon wanted to explore the demands artists endure. Where do art and mental health intersect? Is the price to suffer over and over again worth it? Weeks is also sober, and Harmon looks into how that works with and, perhaps, against the character’s creativity.

The layers shown here are astonishing, especially considering how short the play is.

In the beginning, Weeks mentions that proceeds from the concert will benefit The Trevor Project, which provides crisis prevention for LGTBQ youth and flashes Trevor Project’s phone number — sneaking in some air time for that vital organization.