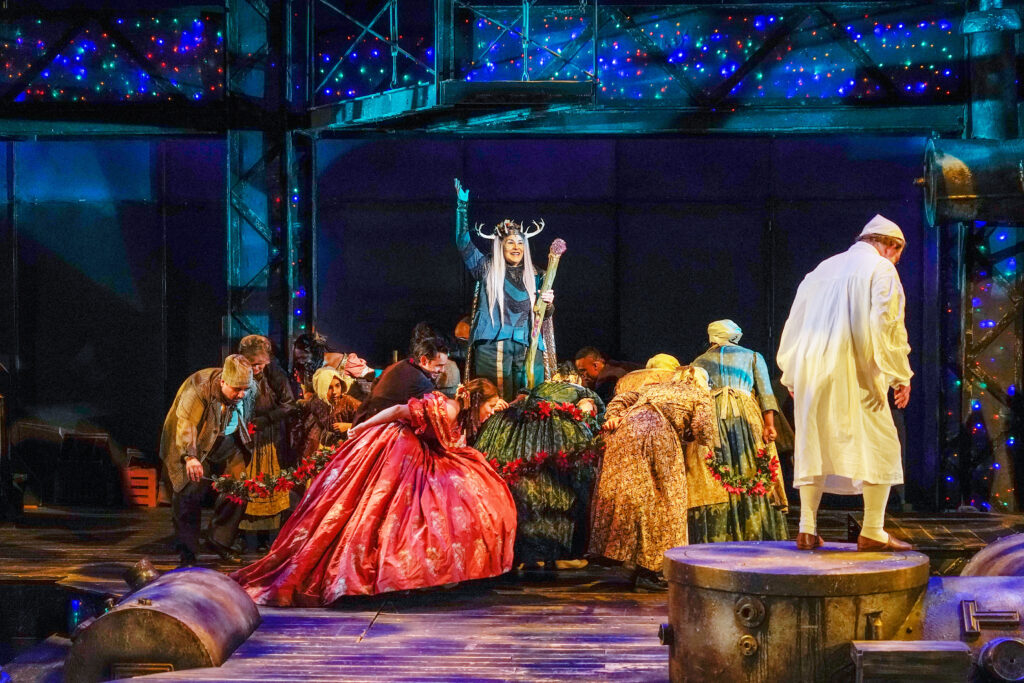 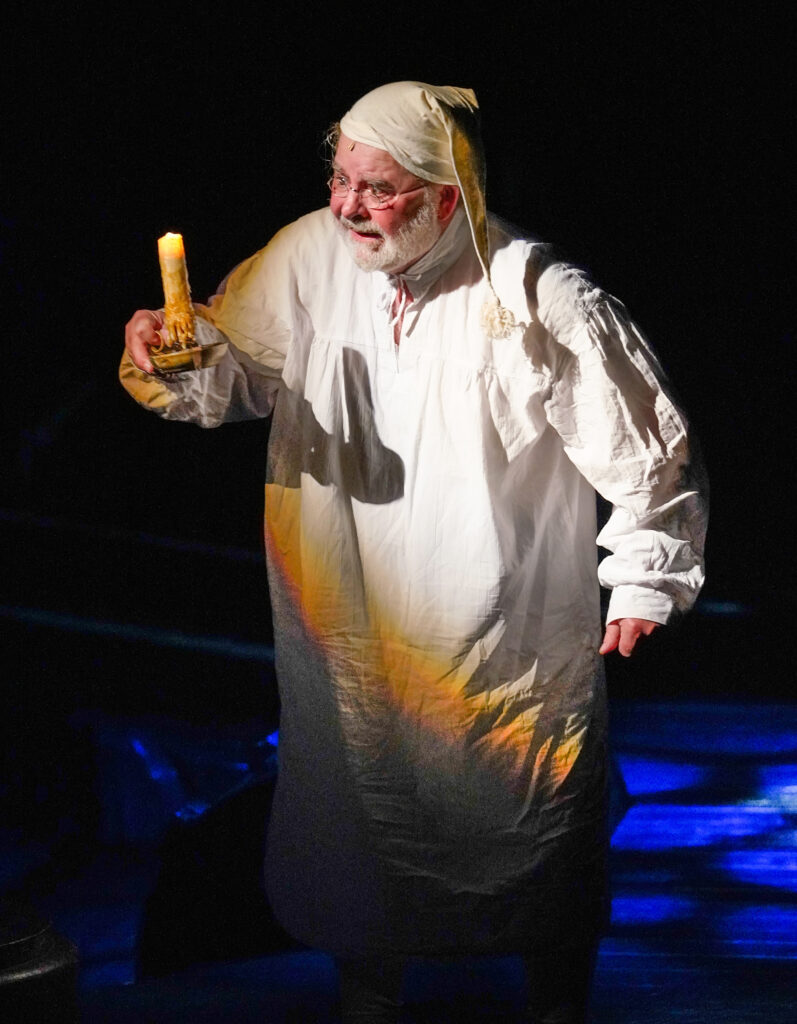 Raphael Parry as Ebenezer Scrooge in DTC’s ‘A Christmas Carol.’

With its steampunk attitude and dark ambience, the Christmas cheer is a bit low-key in this year’s annual production of A Christmas Carol by the Dallas Theater Center. And thank goodness. Director Christi Vela’s vision of a more bleak and dusty world set in Victorian England is ironically refreshing and inviting into what is an equally dark story – until it isn’t.

Upon walking into the Wyly, the imposing stage covered much of the theater’s interior real estate. Actors walked in from every imaginable entrance and performed from each corner that kept the audience’s eyes (and necks) turned in all directions. The show was a visual feast of special effects with raised platforms, smoke abundance and even snow. Despite a desolate set, these touches gave Carol some dope energy.

With a multitude of Christmas carols and songs worked in, the show could perhaps be considered a musical, but really, the songs were just part of the language. They rarely felt forced into the production. Songs in other languages peppered the show and added unexpected gems to the mix.

The cast of 20-ish actors were prodigious across the board. Younger actors matched their experienced counterparts impressively in emotion and drama. As Bob Cratchit, Lee George played him with significant pride and strength as a loyal worker and family man. The Cratchit family actors never played their parts as meek or victims. Thanks to Omar Padilla, Scrooge’s nephew Fred was charming as a husband and nephew as well as sympathetic to his uncle’s disillusionment with the holidays.

All eyes however were on Raphael Parry as Ebenezer Scrooge. The local, legendary actor didn’t disappoint as the grouchy miser, but he never played it simply as that. He gave Scrooge a heart that wasn’t hard to find. Scrooge’s ultimate epiphany here was a progression that made sense rather than just for the sake of the story. He embodied the joy necessary as his story resolved, but it was Parry’s tender moments that were heartbreaking and memorable.

His interactions with the visiting spirits were also remarkable and in a variety of notes. Marley (Shawn Gann) was a hella frightening experience both for Scrooge and the audience. The ghosts of Christmas past (Molly Searcy), present (Sally Nystuen Vahle) and yet-to-come (Alyssa Melton) were all majestic with their idiosyncratic touches on each.

A Christmas Carol runs through Dec. 26 at the Wyly Theatre.

Up north in Farmers Branch, the Firehouse Theater has its next year all set with six MainStage musicals and two junior productions. The theater announced its new shows in a press release earlier this week. Creative roles such as directors, choreographers and the like will be announced in coming weeks along with audition posts.

Facially disfigured in a childhood accident, Violet dreams of a transformation through the power of faith in this show by Brian Crawley with music by Jeanine Tesori. Convinced that a televangelist in Oklahoma can heal her, she hops aboard a Greyhound bus, meets a young black soldier who teaches her about beauty, love, courage and what it means to be an outsider.

From Arnold Lobel’s popular books, this show tells the story of a friendship that endures throughout the seasons. Waking from hibernation, Frog and Toad plant gardens, swim, rake leaves, go sledding and learn life lessons along the way. The two best friends celebrate and rejoice in the differences that make them unique and special. A Firehouse Jr. production.

Billy falls in love with a beautiful girl he meets in a taxi. She is engaged to a British aristocrat, Lord Evelyn. With the help of other passengers, Billy seeks to capture the heart of the girl of his dreams. A romp wrapped in one of Cole Porter’s most magical scores and the new book by Timothy Crouse and John Weidman.

Based on the novel by Daniel Wallace and the film by Tim Burton, this new, small-cast version of the Broadway musical tells the story of Edward Bloom, a traveling salesman who lives life to its fullest – and then some. His larger-than-life stories thrill everyone — most of all, his wife Sandra. But their son Will is determined to find the truth behind his father’s epic tales.

The adventures of advice-giver-extraordinaire, Edwina Spoonapple are told in this production as she directs the neighborhood kids in a series of buoyant production numbers for the latest edition of her weekly “Advice-a-Palooza.” A Firehouse Jr. production.

Adapted from the Nickelodeon series, the stakes are higher than ever in this stage musical, as SpongeBob and all of Bikini Bottom face the total annihilation of their undersea world. Chaos erupts. Lives hang in the balance. And just when all hope seems lost, a most unexpected hero rises up and takes center stage. Featuring original songs by Steven Tyler and Joe Perry of Aerosmith, Sara Bareilles, Cyndi Lauper, John Legend, Panic! At the Disco and others.

Seeking fame and fortune, teenager Frank Abignale, Jr. runs away from home to begin an unforgettable adventure. With boyish charm, a big imagination and millions of dollars in forged checks, Frank poses as a pilot, a doctor, and a lawyer – living the high life and winning the girl of his dreams. When Frank’s lies catch the attention of FBI agent, Carl Hanratty, though, Carl pursues Frank across the country to make him pay for his crimes.

Belle is a young woman in a provincial town, and the Beast, who is really a young prince trapped under the spell of an enchantress. If the Beast can learn to love and be loved, the curse will end and he will be transformed into his former self. But time is running out. If the Beast does not learn his lesson soon, he and his household will be doomed for all eternity. Based on the Disney film.