The world’s a stage 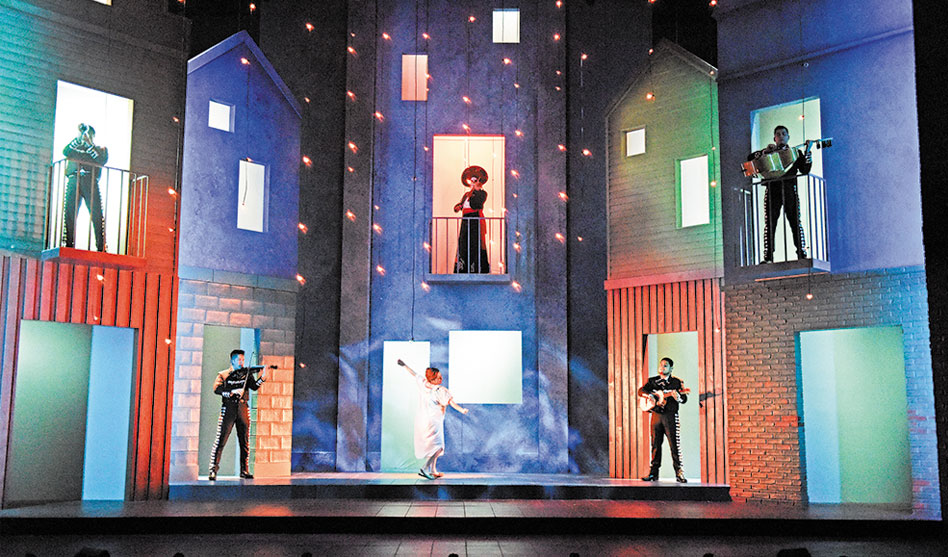 On the evening of Thursday, March 12, at two theaters on opposite sides of the Trinity River, two separate companies were putting up two separate plays that otherwise had little in common except their premiere week: American Mariachi at the Dallas Theater Center was working on its first tech rehearsal for the multi-set, multi-character play with music, to be followed by a dress rehearsal on March 13 before the first preview performance on March 14. Over in Fort Worth, Stage West was mounting its first preview of The Children, a three-character box-set drama.

Three weeks later, these shows share a lot more: Like all live theater across North Texas, both were victims of the shelter-in-place rules from their respective municipalities. Neither got to do full or even meaningful runs of their shows. But both will also live on, if only fleetingly.

As with a number of theaters across the U.S., DTC and Stage West applied for and received special permission to release filmed versions of their plays for availability on the internet. It may be the last gasp of live theater for the foreseeable future, but we’ll take what we can get.

“We learned about 10:30 p.m. that Thursday about the county order” effectively closing all theaters, recalls Kevin Moriarty, artistic director of DTC. He knew instantly that the rules meant that American Mariachi — and another, Pipeline, which had just begun rehearsals — would never be seen by live, paying audiences. But he and the rest of the company weren’t quite willing to give up that easily.

“We gathered together that Friday afternoon to tell them we would be sending them home,” but because they were all prepared to do the planned dress rehearsal, the leadership made a request: “We asked if they would be willing to let us film the dress rehearsal,” Moriarty says. Everyone agreed.

Although most major theaters do videotape all their shows, they are constrained by the rules governing Actors Equity (the main actors’ union) concerning the use of recordings of live performances. Archival tapes may be made with a single fixed camera, and may not be distributed, even internally. Making a multi-camera recording, and then making it available over for streaming, was unheard of… at least until the historic rule-breaking of the coronavirus pandemic.

“Because San Francisco was already under much heavier restrictions, we knew from our peer theaters that they had started a dialogue with Actors Equity to capture a show they already had up and running,” Moriarty says. “So we assumed we could also get permission. Everyone was operating in a spirit of collegiality. We knew if we got the permissions we would move forward.” The DTC’s marketing team brought in four cameras; cast members were allowed to invite a few friends to watch from the balcony and loges. The rehearsal went forward… and the cameras captured it all.

By Monday they had permission. Now, the sole surviving record of DTC’s production of American Mariachi is available to stream … under certain conditions.

“We could only sell tickets for the length of its run,” meaning the original performance date of April 5 — this Sunday — is the last time you can buy the stream. You can only watch once and have only two weeks to watch before it disappears forever. But there are advantages.

“We use the same pathway to buy tickets [for the stream] as for buying tickets to the show… though there is nothing to prevent you from buying one ticket and letting everyone in the household watch it,” he laughs.

For Stage West, the conditions were different. Fort Worth and Tarrant County had different social distancing guidelines. The Children was able to open as planned and play for a weekend before the lockdown effectively closed the theater to the public. But like Moriarty, Stage West executive producer Dana Schultes was aware of the speedy way AE was accommodating theaters trying to salvage a production.
“We reached out to AE and Dramatists Play Service within four or five days, they gave us permission,” she says. By the following Saturday, March 21, they were able to pull together a film crew in just seven hours.

“We had three cameras and our original [stage] director, Kara-Lynn Vaeni, sent in a shot list — a few moments she wanted to get [where the camera focused on that action]. We were lucky we got it in that Saturday to shoot it,” she says. That night, more stringent restrictions would have prevented even the small cast and crew from gathering to film it. (Stage West was also able to secure a two-week window to stream, and have chosen to make it available April 9–23, though tickets are currently available for purchase.)

Schultes feels the translation from live theater to recording was a success. “They did such a good job, there was almost no difference. It transfers well — it’s a play, a single set, three actors, very moody. You can kind of lean into it like you would from the second row,” she says.
Moriarty, who likes the transfer of American Mariachi to video, is more sanguine about the compromise but also generally upbeat.

“It’s a hard time for the arts, but I’m oddly exhilarated that the possibilities [the social restrictions] will unlock,” he says. “A lot of folks are really scared about this time, but I am not. I am incredibly positive. As long as I have been a theatermaker, I have been asked, ‘Why should I dress up and go out to see a play — why not watch something at home on Netflix?’ And for the first time in my life I feel like there is not a person in the world who needs to be explained the value of being in a physical space, surrounded by strangers, sharing a communal experience. You can be at home with your family or come out, have a drink, shake hands, laughing together, touching another person. When we come out of this, I think there will be a renewed appreciation for the value of social connection. There will be this wave of appreciation for being in a place with other people.”

Which is precisely what theater was meant to do.

You can access the stream of American Mariachi through April 5 at DallasTheaterCenter.org. You can order tickets for The Children at StageWest.org for streaming April 9–22.