The ringing in my ears 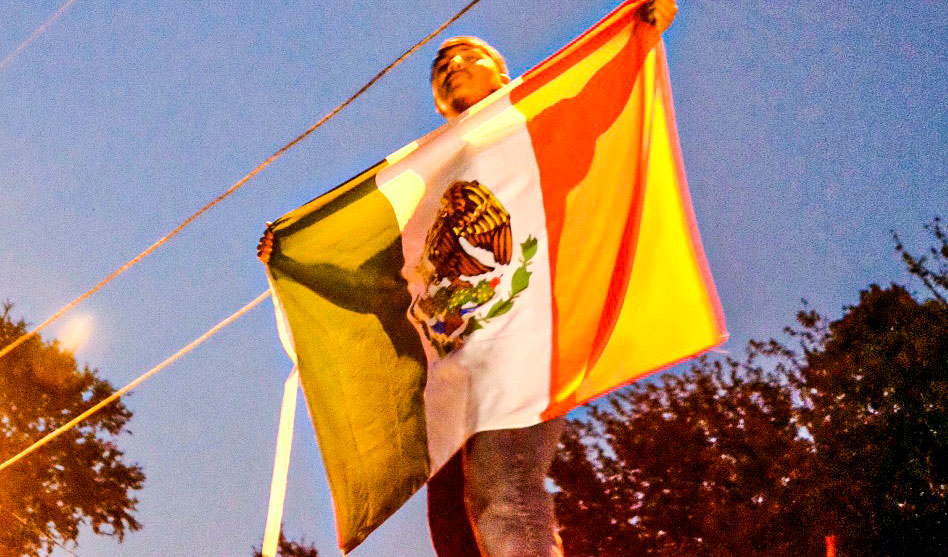 One journalist’s perspective on 4 nights of protest for justice

:Don’t get hit by a car now!” the officer called out as my press assistant and I crossed Houston Street by Dealy Plaza, on our way to the Dallas County Courthouse. Later that night, after the peaceful crowd outside the courthouse decided to march toward Oak Cliff, those words would again ring ominously in my ears as the crowd was led up the on-ramp to Margaret Hunt Hill Bridge without a police escort.
There, under a Texas flag and an American flag, about 400 peaceful protesters were trapped by the police, assaulted with crowd control devices and placed under mass arrest.

After reporting on the protests held in Dallas on Friday, Saturday and Sunday, May 29-31, in response to the killing of unarmed black man George Floyd in Minneapolis on May 25, Monday night’s protest turned out to be easily the most terrifying, chaotic and dangerous few hours yet to have unfolded in Dallas.

Unlike previous nights of unrest here, police this time left the peaceful marchers no exit. Marchers were pressed increasingly close together, to the point that the crowd was unable to comply when officers demanded everyone lie down on the ground.

But unlike the protests on Friday and Saturday, which included minor property damage amidst the chaos, the protest that ended in chaos on the iconic bridge Monday night had been entirely peaceful — at least, until the police surrounded us on all sides, deploying an alarming number of crowd control devices. During the chaos, other journalists and I were struck with a wide range of those crowd control devices. While I was filming on the front line, police shot me directly with wooden pellets, a tear gas canister, and — while I was being led away by my assistant — paintballs.

Despite conflicting reports that the smoke cannisters police fired at protesters Monday evening were not tear gas — the most notable such claim coming from Dallas Police Chief Renee Hall herself — it was my impression and the impression of those around me that police did, in fact, use tear gas against us, the chemical agent that was banned for use in warfare by the 1993 Convention on Chemical Weapons, of which the United States is a signatory.

Before the events on the bridge, I was assured by several officials, including County Judge Clay Jenkins, that other journalists and I would be left alone. Those words, too, rang loudly in my ears later that evening, when my press assistant and I were first “detained” and then officially arrested for about two hours, something that kept us from being able to further document what happened that night on the bridge.

For two hours, representatives from various law enforcement departments — primarily Dallas Police and Texas State Troopers — ignored our requests that they look at our phones to see proof of our press credentials. They instead demanded that we show them laminated press badges to prove that we really were there as working journalists.

Officers said things like, “Oh, so everyone here with a phone is a journalist?” and “Anyone can dress up like you do.”

We looked around the crowd. At this point, we were the only people in the immediate area wearing clothing and other equipment marking us as journalists.

Protesters in the line of law enforcement fire have fared far worse than anyone on my crew; we saw multiple severe bruises, cracked foreheads and even someone losing an eye. Still, having law enforcement interfere with myedoing my job prevents me from documenting the facts on the ground as they unfold. In spite of this, my crew and I remain undaunted. Our role is to document the actions of organizers, protesters and law enforcement officers as they intersect and interact. And what we’ve documented over the past week is unlike anything I’ve ever seen before.

Tearful eyes, broken hearts
The protests in Dallas kicked off on Friday, May 29, outside of Dallas Police Department Headquarters.

I arrived there shortly after the crowd had begun marching toward downtown, been stopped by a line of police and then repelled back toward DPD HQ by the city’s first deployment of tear gas in more than 40 years. For the rest of the evening, the protest around DPD HQ remained extremely peaceful, despite an overwhelming police presence that physically surrounded the entire building. Notably present at the protest were heavily-armed, self-identified right-wing agitators known as the Boogaloo, carrying a sign that said “Black Lives Matter. ACAB (All Cops Are Bastards).”

On Saturday, my coverage of the protests started at 1 p.m. at Dallas City Hall. I stuck with the protests til about 10 p.m., and I was there on the front line when Dallas police — after the conclusion of the second round of peaceful marching — arrived en masse in riot gear, leaving their police cruisers unattended and eventually splitting the crowd in two by using riot shields, batons, flash bangs and, yes, eventually tear gas, too. While I was trying to film a DPD squad shooting tear gas toward the protest gathered in front of City Hall, a police officer aimed his weapon at me from an armored vehicle, demanding that I move back. At that point, I was overwhelmed by the tear gas and had to retreat.

The protesters, after being forcefully separated into two groups, would simply reform and march until being split apart again and again moving throught downtown Dallas.

On Sunday, I spent most of my time covering an entirely peaceful vigil, In Defense of Black Lives, sponsored by a coalition of organizations all led by black women. Events I covered on Tuesday and Wednesday were similarly uneventful, as protesters have become increasingly organized.

The relative calm is a positive turn. But it is no consolation to those who had already been caught in the line of fire and injured.

Many voices, one message
There is no single organization behind all of the protests that took place in Dallas over the past week. There are many voices speaking up against police brutality after the shocking, senseless death of George Floyd. It is this variety of voices that has led to the variety of approaches to protest we’ve seen, from gatherings, to marches, to vigils, to car caravans.

Some organizations, like the NextGenActionNetwork, have tried to organize mass gatherings and marches, while others, like In Defense of Black Lives, have participated in coalitions that put on the smaller vigils and car caravans. It is unclear to me which of these organizations has direct lines of communication with city officials, except for Minister Dominique Alexander of NextGenActionNetwork, who openly lamented the unproductivity of a meeting with city officials on Saturday.

“The city of Dallas will have to instate a 24 hour curfew [until our demands are heard],” Alexander declared. “We’ve got bail money.”

Steven Monacelli is the founding publisher and editor of Protean Magazine, a nonprofit leftist literary magazine. He is a DFW native currently freelance reporting on the protests in Dallas. You can follow him live on Twitter and Instagram at @stevanzetti