The new go-to in blue 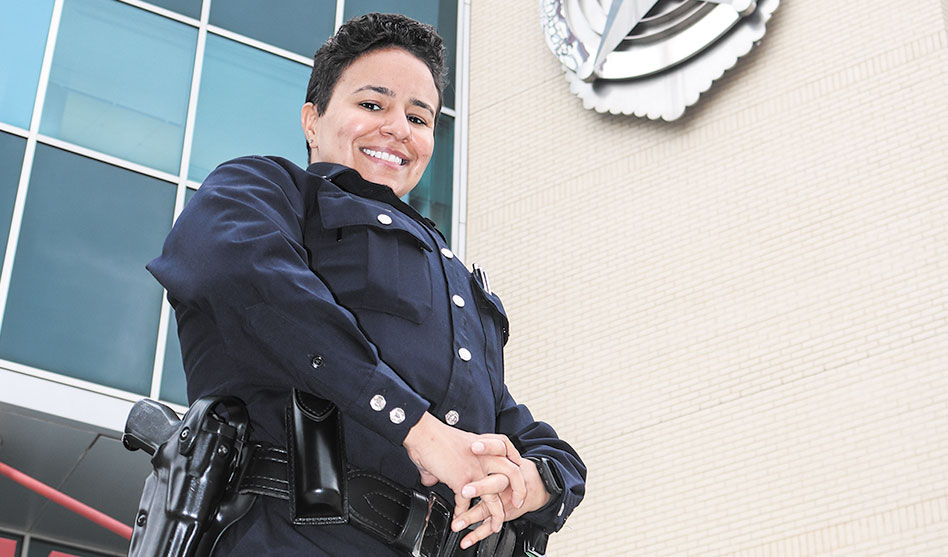 Officials in the Dallas Police Department’s Office of Community Affairs have appointed Chelsea Geist as the new LGBTQ liaison officer after former liaison officer Amber Roman was promoted to detective.
Connecting with the community during the pandemic is a challenge, Geist said, but because of the work of her predecessors over the past three decades, she’s already getting calls.

The position of liaison began informally during the 1980s when Sgt. Earl Newsom, one of the cops patrolling Cedar Springs Road, decided he’d walk into the businesses along the strip and introduce himself. He became such a beloved figure in Oak Lawn, he was named grand marshal of the Pride parade in 1987.

When Ben Click became police chief in 1993 — soon after Mica England successfully sued the police department for its discriminatory hiring practices — he decided to make liaison an official position, and he named Sr. Cpl, Lynn Albright to fill it.

After Albright retired, Laura Martin was named to the position. She was also promoted to detective and now carries out special assignments, like protecting visiting dignitaries. Roman said her current assignment is investigating assaults.

Geist said she is excited about her new position because she’ll be working directly with her own community. She’s engaged and was supposed to get married in October. But she and her fiancee put off the wedding until next year, after the pandemic is over, so that they can celebrate in person with their families and friends.

Geist is from a Chicago suburb where she was raised with her younger brother and sister. She went to a small high school there and played soccer and basketball in school. After receiving her a master’s degree in criminal justice, she moved to Dallas to be with her fiancee. They live in West Dallas with their mini Australian shepherd Wrigley and mini golden doodle Lennie.

“As a child, I had admiration and respect for people who put others before themselves,” Geist said. In high school, she even took a business law class, and, she said, “I was intrigued learning about law and law enforcement.”

There were people who told her she wouldn’t cut it as a police officer because she’s lesbian and biracial. But that just strengthened her resolve. When she got to Dallas, Geist applied to DPD and was surprised how quickly she was hired.

For her first three years on the force, Geist patrolled the Southeast division. It was there, she said she learned that, “Small things go a long way. Just say hello. Show you care.”

To introduce herself to the LGBTQ community during the pandemic, the new liaison officer did a Zoom meet-and-greet on Wednesday, Sept. 30.

Roman said since February she’s tried to stay engaged by going out into the community on limited engagements. When churches have done food distributions, she has been there to pass out information or to visit people temporarily staying in hotels and apartments to let them know where they can pick up some free grocery items. And as the Katy Trail became more congested with so many people at home, Roman tried to get out information about other trails that aren’t as frequently used.

Geist said she’s getting involved in those sorts of community activities as well. “We’re working to keep people engaged with us,” she said. “Community Affairs will do events next year.”

Geist also talked about something she believes the Dallas Police Department is doing right: the new Right Care Team, which only goes on mental health calls, she explained.

The three-year pilot project is operating in South Central, simply because that sector had the most mental health calls in the city. Regular police are part of the team, because “you never know what you’re walking into,” Geist said. But officers with expertise, rather than just the standard 40 hours of mental health training, take the lead.

Roman said the new program seems to be getting people the help they need, and Geist said she hopes to see the program expanded soon.

Both Geist and Roman said that during the COVID-19 pandemic, officers are doing what they can to stay safe, clean and healthy. Cars are wiped down between calls. They are washing their hands a lot. For routine calls, officers maintain distance when possible and wear their masks. Officers have also been issued extra PPE gear.

“We have families at home,” Geist said, explaining why officers are careful to take all precautions.

Police have added a couple of COVID-19 screening questions for those calling 9-1-1. But, Geist assured, all calls will be answered. When indicated, the responding officers and paramedics will wear extra gear and take every precaution possible.

Geist encourages anyone needing help navigating the system to email her. She said it can be intimidating at times, and she’s there to help.
She also said she’s happy to talk to anyone who may have information on a case under investigation. Knowing you’re talking to someone in the community is easier for some, especially those who’ve never had much contact with the police before.

Roman said her biggest surprise during her time as liaison was the number of people who called her from out-of-town. People from surrounding cities without an LGBTQ liaison (Irving is the only suburb with a liaison) and people from out-of-state called her for help. Some wanted to know how to deal with a particular situation. Others wanted to just talk to someone in the community about whether or not they’ve been dealt with fairly.

Geist said she also welcomes those contacts both from within Dallas and from elsewhere.