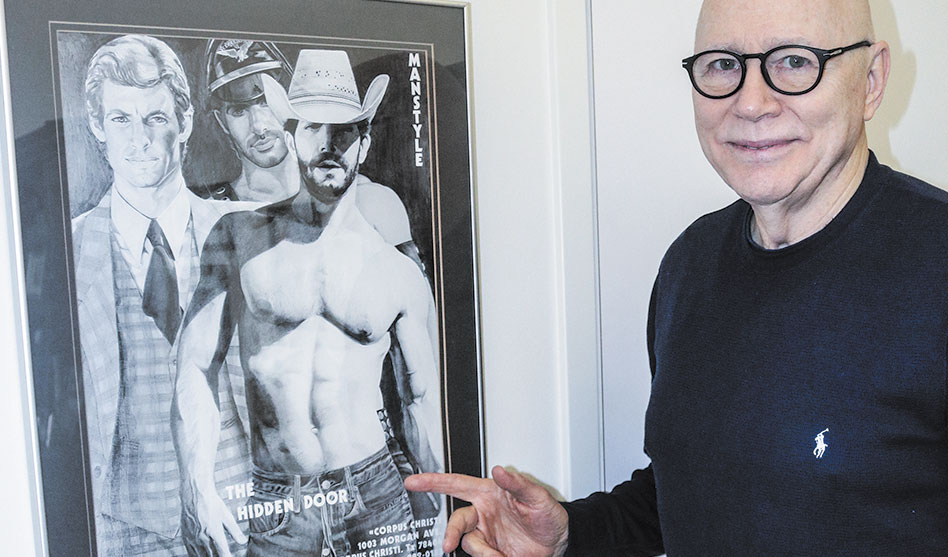 Harvey Meissner with a classic ad for the Hidden Door in Dallas and Corpus Christi.

Founder Jim Roberts, 2nd owner Tony Bobrow had the foresight to create trusts that would keep the bar — and its contributions to the community — going long after they were gone

When Dallas Cowboys owner Jerry Jones was introduced to then-Hidden Door President Tony Bobrow, Jones told him he “got a lot of pussy there.” But Jones’ experiences at the Hidden Door happened before Jim Roberts bought the bar in 1979, when it was still a straight bar frequented by airline employees coming over from Love Field.

Roberts kept the name and turned it into a gay bar.

The bar already had been around at least a decade when Roberts bought it. The original owners, a couple of Braniff pilots, told Roberts the bar’s name came from a line in a Doris Day-Rock Hudson film in which Hudson tells Day he’s going to stop in at the Hidden Door, the bar in the hotel where they’re staying.

When the bar was originally named, Hudson’s sexual orientation was hush-hush. By the time Roberts bought the bar, more people knew the Hollywood leading man was gay.

Roberts saw the importance, from the beginning, of supporting the LGBT community. As a result, he was the one who donated the initial $10,000 used to create the Howie Daire Center, an adult daycare center for people living with AIDS now operated by AIN. And that first big donation was just the beginning;

The Hidden Door has been giving back to the LGBT community ever since.

The Hidden Door was so successful from the time it opened that within a couple of years, Roberts opened a second location in Corpus Christi, which is also still going strong although under the ownership of two customers who purchased the bar about 12 years ago. 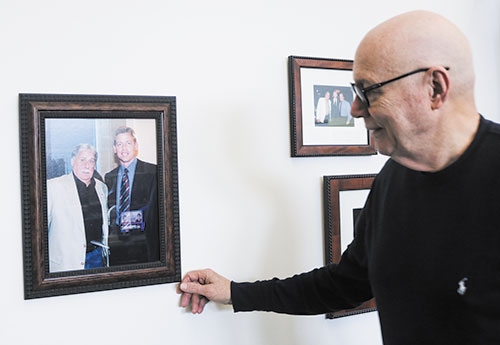 Roberts died 1988, when he was still in his 50s. Before his death, though, he created a trust that owned the bar and named Tony Bobrow the new president of the trust.

Current Hidden Door President Harvey Meissner said the bar’s been closed just a day and a half since it first opened in 1979: It closed a half day for Roberts’ funeral, then it was closed for one full day because its TABC license expired after someone filled out the renewal, left for vacation and forgot to mail it in.
Bobrow refused to open without his liquor license and closed the bar for a day until the renewal was in place.

Before Bobrow died in February 2018, he had arranged for a different trust to manage the bar after his death. Meissner said he’s now the president and general manager of Hidden Door, as well as co-trustee of the Tony Bobrow Trust.

But he’s not the owner.

Dan Cutrer is the attorney who incorporated the Hidden Door 40 years ago for Roberts. Now he’s co-trustee of the trust that owns the bar.

Meissner said this ownership arrangement is unusual: “I’m not sure there’s another one like it in the country.”

He said expenses for the bar are comparatively low; the trust owns the property so there’s no mortgage or rent to pay. At the end of the year, after all bills are paid and bonuses are figured for the staff, the balance of the profits go to the trust. That money must be distributed within the next calendar year.

And the bar has always done well. For three years in a row, it was the No. 1 bar in the U.S. in Miller Genuine Draft Light sales. And as parking has gotten worse in other parts of Oak Lawn, the Hidden Door has always offered its customers plenty of space to park.

The property where the bar is located — at 5025 Bowser, just a block off Lemmon Avenue — is so valuable, Bobrow was once offered what Meissner called a very generous amount to sell. But he laughed off the offer, Meissner said, adding that the would-be buyer forgot to figure in the value of the business.

Buying new property in Oak Lawn, including space for parking, and building something suitable to house the Hidden Door would have cost much more than was offered, he said.

After Bobrow died, the trust closed out the balance in the Jim Roberts Trust, adding those funds to funds from the Bobrow Trust and distributing the $250,000 total equally between Resource Center, Legacy Counseling Center and AIN in May last year. In December, the Bobrow Trust donated $100,000 to Dallas Hope Charities, which used it as seed money for a shelter for LGBT youth. The trust also gave $25,000 to AIDS Services Dallas for its ongoing work providing housing, including a new facility being renovated for its residents who have returned to work and are able to live independently.

The trust is also the primary sponsor of an upcoming all-day Ed-U-Care program that addresses caregiver fatigue, and it continues to donate money in Bobrow’s hometown, Teague, to support the volunteer fire department, the library and a soup kitchen.

HARVEY MEISSNER
Meissner has worked for the Hidden Door for 34 years. In February 1986, he accepted a temporary, part-time job working behind the bar — and maybe one year he’ll make that job permanent.

He had been working in medical equipment sales. He said the company only hired med techs, but his major in college was marketing. Still, he became the company’s top salesman.

After he came out at the age of 29, Meissner decided to make a fresh start. So he moved to San Diego. He met someone at Balboa Park who managed a bar, and he offered Meissner a job. Meissner said he didn’t know anything about tending bar, but that place only served wine and beer. So he accepted while he was looking for a “real” job.

Before he knew it, Meissner was managing the bar. Then he was managing two bars. And he was winning awards as San Diego’s best bartender.

But as much as he enjoyed bartending and loved not being under constant corporate pressure, he knew this wasn’t what he needed to be doing. “I needed to push myself away from my comfort zone,” he said.

So, after four years, he resigned and moved back to Dallas. That’s when he met Steve Tracy, who was bartending part-time at the Hidden Door. Tracy was a also sportswriter who recruited Meissner to play on the Hidden Door’s softball team. When Meissner came into the bar, Tracy introduced him to Roberts, who offered him a job.

Meissner decided he’d take the job while he was looking for that “real” job. But part-time developed into full-time, and he found himself behind the bar for 31 years.

The bar continues hitting new records. Its biggest day ever was Sunday of Texas Bear Round Up weekend this year. The second largest was Pride weekend this year, following the newly-revamped Alan Ross Texas Freedom Parade in its new location at Fair Park.

The Hidden Door also notched up record sales for a September this year, even though the Pride parade and festival had been moved from September to June, and from Oak Lawn to Fair Park. And despite an extremely cold November this year, the bar set a sales record for that month, too.

That’s very important to Meissner — and not for any personal gain. It’s important to him because those record sales mean more money goes into the trust, and that means more money will be distributed back into the community, letting Hidden Door continue to support the people who have supported the bar for the last 40 years.