The gay film we’ve waited for 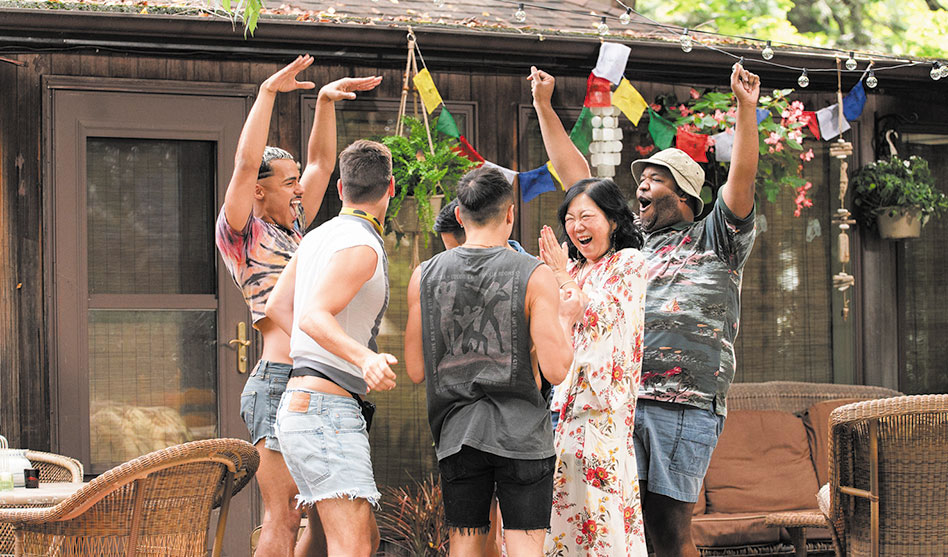 Fire Island could be the movie queer men have been waiting for. We might have thought it was Brokeback Mountain, even though the leads were straight. Then it could have been Love, Simon a sweet film that just felt a bit too adolescent. Call Me By Your Name was lovely and sexy but again, straight guys gone gay.

Billy Eichner’s Bros may be on the horizon, but Fire Island has gotten here first. And with its cast and creatives, Fire Island could be as good — or as gay — as it gets.

Queer comedian and screenwriter Joel Kim Booster wrote the romantic queer comedy inspired by Pride and Prejudice that premieres today on Hulu. It centers on two friends, Noah (Booster) and Howie (SNL’s Bowen Yang) as they meet up with friends Luke (Matt Rogers), Keegan (Tomás Matos) and Max (Torian Miller) to head to Fire Island for a week of partying and hooking up.

Howie is more interested in finding love, while Noah is a bit more unapologetic about hooking up with a selection of men and is happily single. The gang stays with Erin (Margaret Cho), as they always do, until they learn she has to consider selling the house which could mean the end of Fire Island for all.

Written by a gay screenwriter and directed by queer filmmaker Andrew Ahn, the gay perspective is abundant throughout the film that is part rom-com, part relaxing meditation. Fire Island itself is a character with its isolated surroundings providing an escape for primarily gay men.

Ahn and cast member Zane Phillips sat with the Dallas Voice in a promotional tour last month to discuss the film and how a queer-centric movie tells a gay story differently than others.

Dallas Voice: What’s immediately noticeable is the cast chemistry in Fire Island. This feels like a distinct group of friends who have known each other for a long time. Ahn: Everyone was really excited to make this movie and knew that it was special. So I think that energy made it. We all grew really close, and that allows the friendships in the film to feel really lived in. 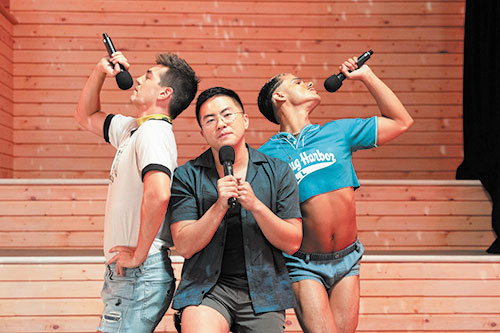 Some had already known each other though, right? Ahn: Exactly. Tori Miller, who plays Max, knew Joe from years ago in Chicago. Joel cast him in his first play. Bowen and Joel have been friends. But Tomas — who plays Keegan — was a discovery. What I love about even all the new people is that they all have a good heart and came with a passion for this film. I just had a feeling everyone would get along beautifully.

You have this strong cast but Fire Island itself is a character. This almost feels like a love letter to the place. Can you talk about the intention you had in filming the locations? Ahn: Joel has been to Fire Island a number of times throughout the past few years. And he gave so much observational insight about the island in his writing. I asked him a bunch of questions, and I went to the island as much as I could during pre-production. I went to the underwear party with our cinematographer doing these shot listings while shirtless. People were looking at us funny.

Phillips: But probably not the weirdest thing to see at the underwear party.

Ahn: We really wanted to capture the magic of the place and the beauty of landscape. I think I was just trying to be a sponge and soak it in and find a way to portray the island — its good, bad, beautiful and ugly sides — all in one film.

Phillips: Everyone who has been to Fire Island who has seen the movie says to me the island has never looked more gorgeous. It truly is a testament to when you go there. Sure there are other gay meccas but there’s something so bucolic and quiet about it.

Congratulations on snagging a major studio to get behind Fire Island. How did that happen? Ahn: To this day I don’t know how Joel bamboozled Searchlight [Pictures], but I’m so glad they took on this film that has two queer Asian-American leads and helped us make this movie. A couple years ago, it was probably unimaginable, but audiences have been asking for it for years.

Fire Island exists in indie film land. and I’m hoping that more and more films — indie and studio — get to center queer people of color in a way that creates a more equitable cinema culture; that we get to show off the diversity of the culture our communities.

Was there an inclination to either focus on the Asian-American identity or to simply not? Ahn: Joel and I never wanted to be heavy handed about it. We’re not that way in our own existences. … But it’s this thing where we wanted to show these characters as human beings, as three-dimensional and that a lot of other things make them who they are.

You have Noah and Howie, two gay, Asian-American men who check off the same demographic boxes but are super different. They have diferent attitudes about love and sex and romance and can still be friends. We’re just showing it’s not a monolithic experience. That feels really cool and radical to me.

OK, time for some tea: Who was the biggest diva on set? Ahn: (Laughs) Margaret Cho’s dog Lucia had some needs. You know, there was something about the energy of the movie that’s about chosen family, community, and we all had that perspective. It really felt like a team effort. Now, this was Joel’s baby, and he wanted to do great in this. But there were no divas.
Phillips: Everyone believed in the material. We wanted it to be good and have a devoted interest in it. Look at you trying to TMZ us.

Who was acting for the Oscar the most? Ahn: Everyone was trying to do their best. No one was snoozing this in; no one was coasting. I really love Matt Rodgers though. He will stay in the frame as long as he can. If his body is leaving the frame he’ll leave his face in. His hand sneaks into every frame.

I’ll say this about Bowen and Joel: They are comedians, but they got to do some dramatic stuff here. They give such beautiful, dramatic performances here. I want them to become huge stars and get big movies from this.
Some of the conversations in Fire Island felt very real. I feel like I’ve had similar chats with friends. Was that all script or was there any improvising? There were some good reads in there. Phillips: I would be in the background during some of that, and I knew I wouldn’t even have to work on this. (Laughs)

Ahn: We use the script as our guide throughout the filming, but I really empowered the actors to do fun runs, do an ad lib. I think that adds to the naturalness of the comedy. A cast like this with so many comedians, so much fun stuff came out of that.

What’s the significance to you that Fire Island was written by a gay man and directed by a gay man in comparison to many other queer films from Hollywood or major studios? Phillips: It has to do with this separation. You are separated from straight people. I think it is such an intimate look at what it looks like when we are at our most comfortable. On the island you feel totally insulated from everything else.

So much queer media we see, the representation is great, but they don’t have a queer voice behind it, or there’s this idea like, is this for teen girls? This is very specific because you see the honesty behind it.

Ahn: That specificity was a big part for me making this. Yes, I’m so excited for a big audience to see this, but I made it for queer people. I made it for queer Asian-American people. To get really specific, I made it for Joel to give it a sense of being super personal. We made Fire Island out of love and not out of any desire for fame or money.
Stream Fire Island beginning Friday, June 3, on Hulu.