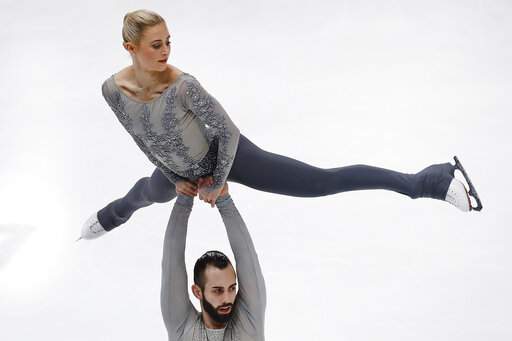 Where in the world are Ashley Cain and Timothy LeDuc? Most days you’d find the recently-crowned U.S. National Pairs Figure Skating Champions putting in 8-hour-plus days training at their home rink in Euless. But last Friday, they made a long journey to Saitama, Japan (about 20 miles north of central Tokyo) — not for their version of Spring Break, but serious business. Cain and LeDuc will be competing for Team USA at the prestigious World Figure Skating Championships this week.

The trip to Tokyo may have been long (14 hours) and mostly uneventful (both watched Boy Erased and admitted to a bit of waterworks), but the road to qualifying for Worlds was anything but simply. Following successful performances in the early part of this years’ competitive 2018-19 season, the pair took a tumble on a lift at a December international event in Croatia that left Cain with a concussion. Bouncing back, they undertook strict USFS concussion-recovery protocol and by the national championships in Detroit in January, they won the crowd and the crown. Along with other Americans (three Men in singles, three Ice Dance teams and two Ladies in singles), Cain & LeDuc will be the only U.S. pairs team competing for a World title in Saitama.

Why the lone rangers? The answer requires a bit of math. Each national federation is entitled to send one entry per discipline (although they have to earn a minimum required technical score in a qualifying competition). Depending on their results at the previous year’s World competition, some countries are allowed to send a second or third entry. If a country has only one entry, that skater/team must place in the top ten to earn a second entry and in the top two to earn three entries to next year’s championships. If a country has two or three entries, their combined placement (best two) must be 28 or less to keep two entries for their country, and 13 or fewer to qualify three entries. Entries do not carry over and so countries must continue to earn their second or third spot every year. 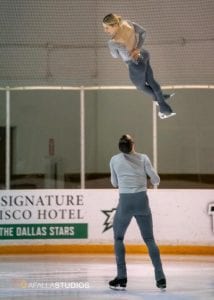 In the case of Cain and LeDuc, last year the U.S. fielded two pairs who had disappointing showings, placing 10th and 20th, adding up to 30, thus missing the magical mark of 28, so Cain and LeDuc will go it alone.

Getting those spots back for Team USA is definitely on their minds. “Our goal is to be in the top 10 to win back the spots for U.S. pairs,” shared LeDuc in a text message from Japan.  “Obviously we want to skate well and see our very hard work and preparations show in the competition but getting the spots back is our primary goal.” To earn two quota spots for the U.S. simply put, Cain and LeDuc need to finish 10th or better at Worlds. To earn three spots, they need to win gold or silver.

They may just have a secret weapon in their arsenal. Their long program to the music from the W.E. soundtrack has garnered widespread acclaim. “We love, love this year’s Pillars of Equality freeskate,” wrote LeDuc, “and we’re super excited to bring it to the World Championships. It’s such a great vehicle to showcase all that makes us strong while also showing that you can enjoy the beauty of this sport and of two athletes without relying totally on traditional gender roles and romantic story lines.”

LeDuc is among only a handful of out gay athletes competing in Olympic sports and has a fierce advocate in Cain.  Their strength and clarity of vision has caused heads to turn on and off the ice. Telegenic, charismatic and decidedly well-spoken, this team has the smarts and the hearts to stake their claim in the top ranks of elite figure skating.

Cain & LeDuc’s stamina will soon be put to the test, first at Worlds beginning this week and also next month when they compete for Team USA at the International Skating Union’s World Team Trophy event in Fokuoka, Japan.  In between they will stay and train in Japan with Russian coach, Nina Mozer. They’re hoping to have a chance to see the harajuku area and explore Tokyo.

Four weeks is a long time to be away from home, but Cain will have plenty to occupy her mind… mainly finalizing plans for a June 1 wedding from 6,000 miles away. Bet she’ll have plenty of help back home from long-time beau and handsome husband-to-be Dalton Gribble.

As for LeDuc, duty called and he missed the Texas Bear Round-Up this past weekend in Dallas. But he joked: “Maybe I’ll have to stop by the Tokyo Eagle while I’m here.”