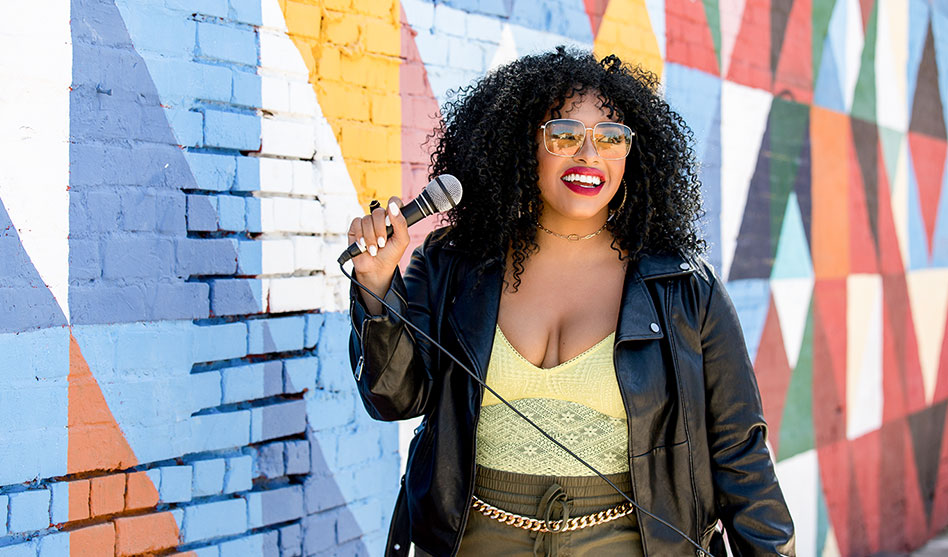 These comics bring a rainbow of laughs to area stages

LGBTQ comedy is on the rise in the Dallas area, but it’s also still finding its audience. There are a number of queer-centric comedy shows currently happening, from Deep Ellum to the Design District, with three comedians working to help spread the laughs around the town and eventually in the gayborhood.

All three performed in June at the Pride Edition of the B’POC Show at the House of Blues.

Now they are performing at various shows spreading the gay love and laughs. Please meet these three talents.

Identifies as: Nonbinary/genderfluid and solo poly

New to comedy: “My first comedy class was in November of last year, but I did comedy writing in 2013, and my first time onstage was in 2015.”

Onstage representation: “I’m solo poly, I’m bi, and I don’t see a lot of comedians talk about their identities in the mainstream. I like talking about the uncomfortable stuff like sex and relationships, but we don’t see that. For me, I built a place for myself where I can say whatever the fuck I want.”

Show time: “After the pandemic, after George Floyd, we did not heal properly. I left my six-figure career in cybersecurity educating on diversity, equity and inclusion and took a break. It wasn’t what I wanted to do. The term BIPOC – Black, Indigenous, People of Color – was often in my vocabulary, so I did a take on that and created The B’POC Show for the ‘Best People of Comedy.’”

POC and roll: “We had our first show in January and our first contract with House of Blues in February. This next will be our fifth episode, and we’re growing with a Houston show this fall and Chicago next year. For each show, I source the best comedians that align with the heritage or awareness that month. They either identify with or are allied with that community. I wanted to walk in my purpose, and DEI was that, but doing it my way.”

Pride and beyond: “In June we had our Pride edition at the Foundation Room in House of Blues. Other themes or episodes were focused on neurodiversity, women’s history; we had an AAPI Heritage month show, and we even had a show for police officers and first responders with Protect and Swerve. In August, we’ll have a back to school theme with teachers onstage.”
Queer comedy in Dallas: “Props to the Dallas Comedy Club. They’re doing a great job promoting shows like Queer Factor. But there isn’t a big queer comic scene. Hopefully we can be a beacon for more representation. I’d love to bring B’POC to other venues and to the gayborhood. We can be everywhere.”

The B’POC Show Bak 2 Skool Edition will be at 8 p.m. Aug. 25 at the House of Blues Foundation Room. HouseOfBlues.com. 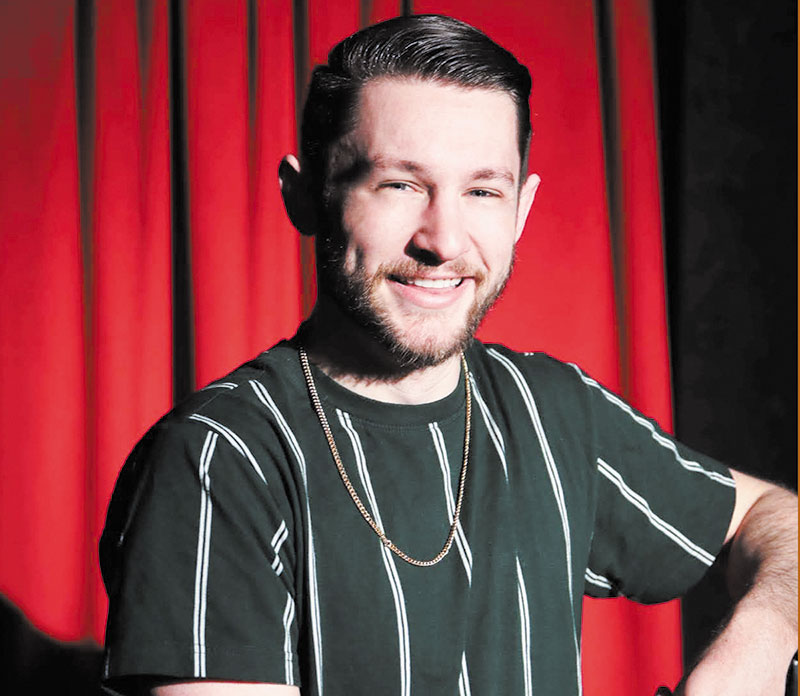 Living off laughs: “I’ve been doing comedy for four years now. Right around this time, I did my first open mic in 2018. I could say I am a professional because I do get paid, but I still have my regular job that pays the bills. But I am trying to make a living off of comedy.”

He’s that guy: “It’s pretty cliche but for a reason: I’ve always been the funny guy. Comedy looked fun, and I felt I could do that. I wanted to make people laugh. My best friends and family were supportive and told me to go try it. I found an open mic and had a three-minute set and bombed horribly, but I fell in love with it.”

Step by step: “I began researching and found the Dallas Comedy House, which is now the Dallas Comedy Club, and got into their internship program. Knowing you’re funny enough definitely comes from delusions. But you have to have that inner confidence and take it to the stage. For me, it wasn’t scary, just new, but that’s what’s inspiring about it. I knew I could do it. I just have to work harder to get on stage more often.”

Coming out with comedy: “It has basically helped me with my identity. I started comedy in 2018 but didn’t come out until February 2019. When I came out, I remember it was by telling a joke onstage. I felt I could share this and feel safe and make it known. I had this realization recently that getting into these queer comedy groups and being more open helps me understand myself. Comedy helps me power through it all, and things I can’t say in normal conversation, I can say onstage.”

All over the place: “I do stand-up, but I also do improv. I’ve been on the house team at Dallas Comedy Club since it opened. I do Short Form and Musical Improv at DCC. I’m also in the Queer Factor show there produced by Stefan G. That’s a once-a-month variety show for the LGBTQ community. And then, over at Stomping Grounds Comedy Theatre, I’m in Sassy Night Laugh, another LGBTQ sketch comedy show. I’m also in a new show, Press Play, with Frankie at House of Blues (Ed. note: The show debuted Aug. 18). It’s a music-based comedy show.”

Community service: “I have not performed in the gayborhood but I want to. We do want to make this more accessible to the community. I’d love to get into the Round-Up or S4 or even Roy G’s or Woody’s. I see so many opportunities for comedy there and get involved on the Strip.” 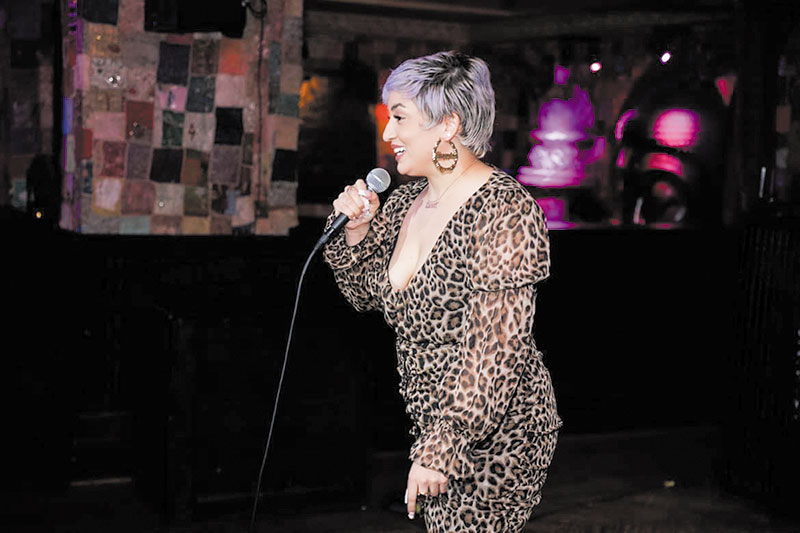 Short hair, don’t care: “I recently cut my hair short, and it opened up a lot of experiences. So now I have all these new jokes and material about being approached by other women. It’s a major compliment to attract both sexes. Frankie has heard my set before, and that’s how she brought me onto the Pride show in June”

Queer alignment: “I am an ally. I feel comfortable, and I see myself better when I’m among the community. I’ve made really good friends, and really, you can’t go wrong with your own truth whatever it is. And while I’m definitely an ally, the word bothers me because it feels more like it’s saying ‘I tolerate or I will tolerate.’ We are all just one big happy family.”

Language barrier: “I’m Honduran, and I was telling this woman that I enjoy eating pupusas which is one of our cultural dishes. She thought it was like a code word for something else.”

At first you don’t succeed: “I’ve been in comedy for five years because I failed at everything else. I wanted to be a dental hygienist. I wanted to be a Spanish teacher. I looked into architecture, but I could barely spell it, and I failed geometry. Comedy turned out to be the only career I can become successful from my failures.”

Kings over queens: “I was watching Latin Kings of Comedy and that inspired me, but I also saw four Latin men. My parents wanted a daughter they could brag about — a lawyer, doctor. I think I’m their favorite disappointment, though. But the power of believing in yourself is something. Once I did stand-up it unleashed something that I was scared to admit. I came out of the closet, if you will.”

Comedy comfort: “What I like about this is that I don’t feel alone. I can talk about myself and my self-worth, and women will come up and say they share the same experiences. It really makes me wish I spoke up sooner. When I started going to therapy, my jokes started getting better. I could examine my life deeper and comedy helped process that.”
Berrios performs on Sept 14 at the Addison Improv. She can also be heard on the Kink’D AF podcast hosted from the “perspectives of five Black and Brown women” including co-host Benz at linktr.ee/KinkdAF.