That write-in position in Dallas County: it’s a trans issue 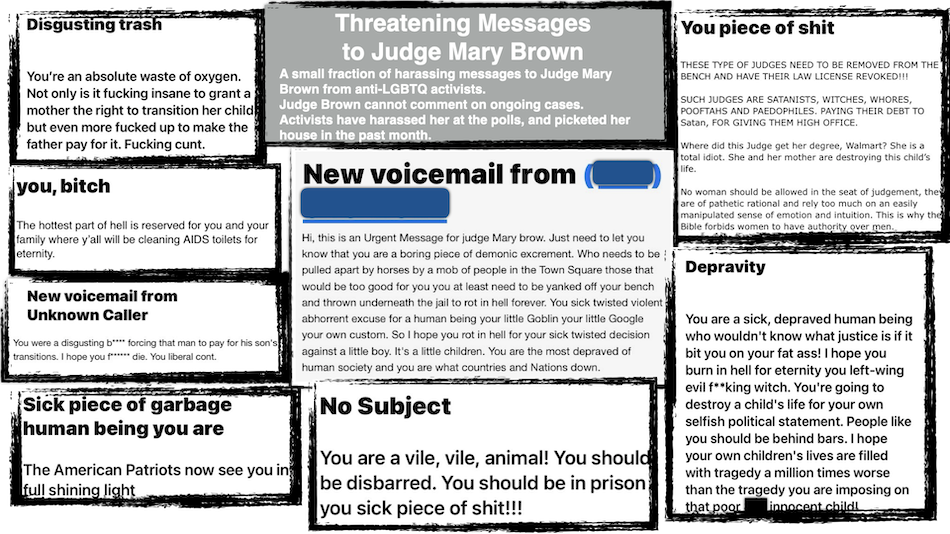 A compilation of threats sent to Judge Mary Brown, who is presiding over a custody case involving a trans child.

If you’ve already early-voted, you noticed a write-in-only option for the 301st State District Court.

Brown submitted her re-election forms and would probably have been easily re-elected, but another Democrat challenged the signatures on her application and her name was not placed on the ballot.

No Republicans filed for the seat, so whoever receives the most write-in votes will become the judge for the 301st.

To be clear, Brown is running and you can write in her name. But a Republican — Earl Jackson — has also thrown his hat into the ring, and you may choose to write in his name. Tabulating the vote will take weeks, since it’ll be done by manually and a lot of people have written in their own or a friend’s name.

But what’s the controversy? Brown has been presiding over a child custody case involving an eight-year-old who has come out as transgender. She’s being accused of ordering gender reassignment surgery.

Gender reassignment surgery simply isn’t done on children and the only two rulings in the case so far are for the parents to not do anything.

Despite that, people have been picketing her house and sending threats. A group called Protect Texas Kids has been fundraising off the issue. So has the father who used the issue to mount a legislative campaign that he lost in the primaries.

Brown is also being harassed and threatened as she’s campaigned at polling locations and marchers have picketed her house.

Threats have been sent like this one: “You bitch. The hottest part of hell is reserved for you and your family where y’all will be cleaning AIDS toilets for eternity.” Other threats have been even more graphic. Imagine if she had actually ruled in favor of medical treatment for the child.

One protester has gone to jail for threatening her and another judge using language we decided not to repeat in this piece.