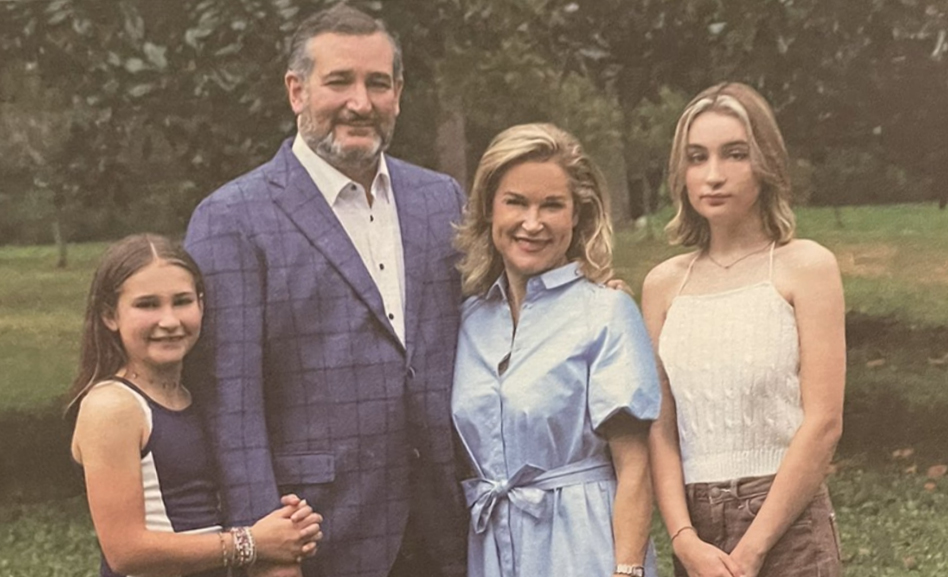 The Cruz family’s Christmas card. That’s Caroline there on the right.

Anybody remember that video from back in 2016 of Ted Cruz’s daughter, Caroline, flinching away from her father when he leaned over to kiss her cheek? I remember watching that and thinking how sorry I felt for that kid that she was being used as a pawn or a prop in Ted Cruz’s political campaign.

Well, Caroline, who is 13 years old now, has apparently gone viral for a video she posted to her TikTok account in which she says that while she got a lot of new followers on TikTok because of who her father is, she is not a fan of most of her father’ political views. And in a more recent development, the teenager apparently described herself as “bi” in her TikTok bio.

The account has since been set to private, but there are screen grabs all over the internet now that include the original video (posted sometime in December) and her interaction with someone who commented, asking her if her (notoriously anti-LGBTQ) father knows she is bi.

In the video, the teen says there are advantages and disadvantages to being Ted Cruz’s daughter. Advantages, she said, are getting “candy and gifts in the mail” and getting to travel (like, say, to Cancun?). Disadvantages, though, include being followed everywhere by security guards, even if she just wants to take a walk through her own neighborhood or go visit a friend.

She continues, “Also, a lot of people judge me based on him, at first glance, but I really disagree with most of his views.” And she claims that on the family Christmas card, “they literally made my shirt,” a crop-top sweater, longer so her mid-section did not show.

It was after the video went viral, according to LGBTQ Nation, that somebody noticed that Caroline Cruz, in her TikTok bio, included her preferred pronouns and described herself as bi. When someone asked her about it in the comments, she replied, “I haven’t told him yet, I’m kinda nervous tbh but I don’t think he would be mad about it.”

As I noted before her TikTok account has now been set to private so that anyone who wants to view the content has to request to be added as a follower, and it also plainly notes, in the public info, that there is “no bio yet.”