I just read on NPR’s health blog about a new study that found that “an estimated 3.3 million [women] nationwide said that their first sexual experience was rape.” And this is likely an underestimate, because the data for the study predates the very new #MeToo movement, and only women age 18 to 44 were included.

That’s a lot of women and a lot of rape. And it’s both shocking and completely unsurprising considering that we live in a country where President Trump has been accused of rape and sexual assault many times, and all of his accusers have been dismissed as liars. And then, president rapist appointed Brett Kavanaugh to the Supreme Court, and the Republicans enthusiastically supported him despite very credible testimony by Christine Blasey Ford that he’d sexually assaulted her in high school.

And lo and behold, what’s this trending now on Twitter? Brett Kavanaugh’s penis. Because that’s the horror show we’re living in right now.

To be clear, it’s not a dick pic of Kavanaugh on Twitter. It’s more allegations of him using his penis to be a sexually assaulting trash heap. The latest allegations refer to incidents that happened while he was in college, and they star his penis being thrust at women who didn’t want that to be happening to them.

Trump’s very Strange and Random capitalizations aside, Trump doesn’t know if what’s being said about Kavanaugh is true or not, because the FBI didn’t bother to investigate the allegations at the time of Kavanaugh’s nomination.

Of course, that’s according to the Liberal Media, so … .

The next day Trump tweeted: “I call for the Resignation of everybody at The New York Times involved in the Kavanaugh SMEAR story, and while you’re at it, the Russian Witch Hunt Hoax, which is just as phony!”

That’s journalism in America, folks. The goddamn president calls for the resignation of reporters he doesn’t agree with.

Other, much smarter, people (Sens. Elizabeth Warren and Kamala Harris for example) are calling for resignations, too — or, more specifically, impeachments. 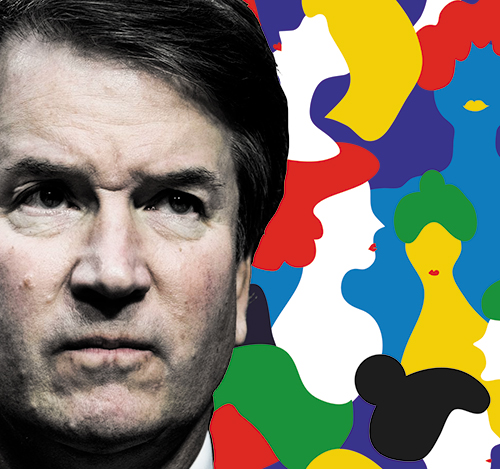 “Confirmation is not exoneration, and these newest revelations are disturbing,” Warren tweeted. “Like the man who appointed him, Kavanaugh should be impeached.”

Would the Senate go for it? Well, no. Of course not. It’s still Republican-controlled (though you can help that by volunteering for a U.S. Senate race in your neck of the woods), and Mitch McConnell, who said the new allegations “felt a little like Groundhog Day,” is calling the shots.

But that doesn’t mean a full investigation shouldn’t happen. Impeach Trump. Impeach Kavanaugh. Let the proceedings begin, because Democracy is heading toward an iceberg, and if we don’t do something this ship is going down.

Americans deserve the truth. Granted, a number of them will choose only to believe their dear leader. But winning over the mindless isn’t the point.

The point is we should be taking seriously charges of sexual assault and saying, “Gosh, maybe men who have credible accusations against them shouldn’t be allowed to hold the most powerful positions in the land.”

This is a man who, for the rest of his life, will be making decisions that govern the bodies and lives of women and LGBTQ people in this country. This man who thought that pushing his penis into a woman’s face was a funny joke in college.

I can’t stop thinking about those 3 million women in this country were raped as their FIRST sexual experience. Their first! This doesn’t count the many more who were raped after that.

And still, our default is to not believe women, to dismiss them as liars, especially when they accuse powerful men.

The idea that there are all these women out there who will stop at nothing to destroy a good man’s life is absurd. Sexual assault isn’t something the majority of women lie about.

The idea that there are all these men out there who will stop at nothing to destroy a good woman’s life by assaulting her and then calling her a liar? We see that played out over and over again. And it has to stop.