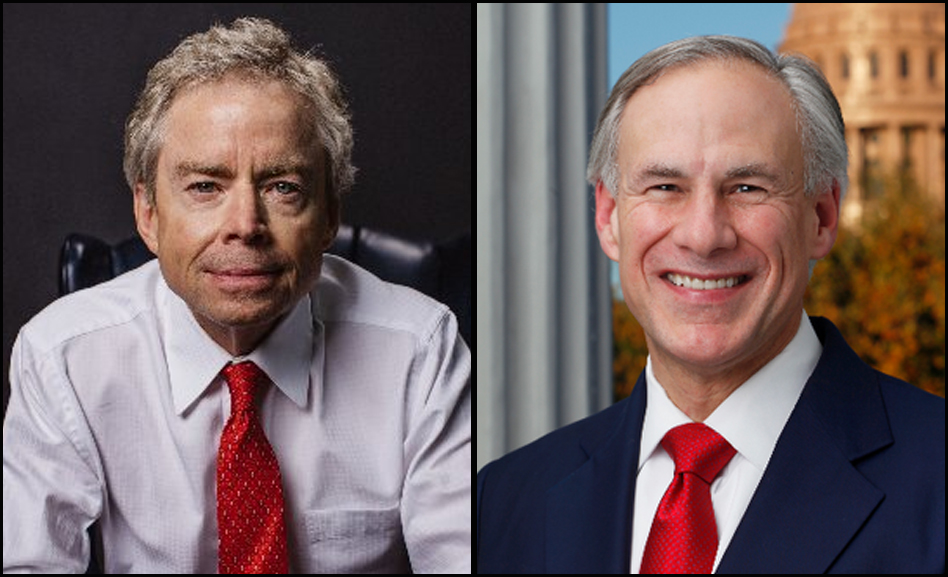 Former state senator Don Huffines, left, and Gov. Greg Abbott, right. Huffines, who is challenging Abbott for the Republican nomination for governor in 2022, posted a video on YouTube criticizing Abbott over a state agency website offering resources for LGBTQ youth. That website was almost immediately taken off line after Huffines’ video was posted.

As legislation that would prevent transgender youth from participating in school sports moves closer to becoming law, thanks to Gov. Greg Abbott’s insistence, the Houston Chronicle has uncovered evidence that Abbott — or at least his supporters in the state’s employ — has been playing political games with the lives of LGBTQ youth in an even more insidious way.

It began in late August when anti-LGBTQ businessman and former senator Don Huffines, who is challenging Abbott for the GOP nomination for governor in the 2022 election, posted a video on YouTube criticizing Abbott for allowing the website for a state agency to include resources for LGBTQ youth, including the number for a suicide hotline. Within hours, part of the information was removed from the website, and shortly after, the entire website was taken off line.

Emails obtained by the Chronicle show that the website was taken down in response to Huffines’ video. It remains offline with a message that it has been “temporarily disabled for a comprehensive review of its contents.” 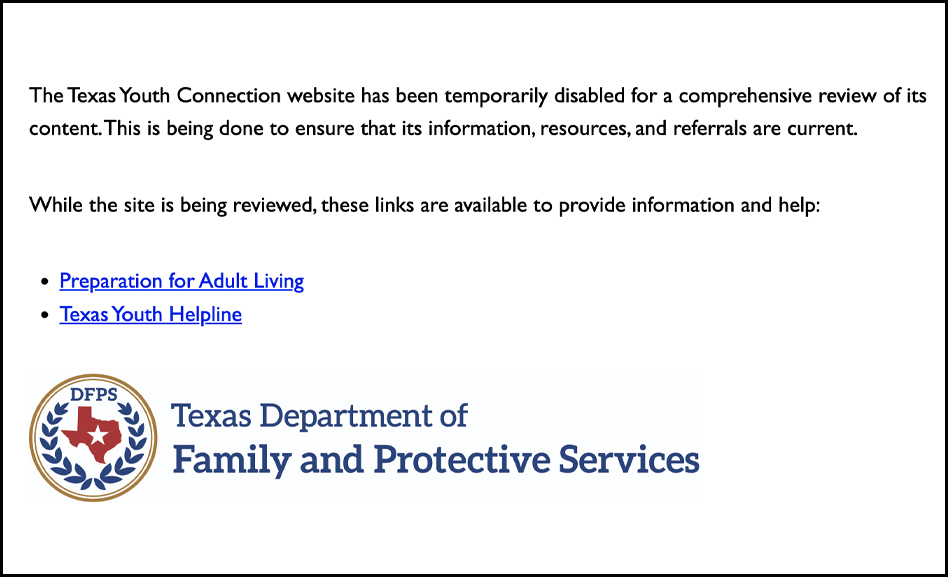 Business Insider, recapping the Chronicle’s story, said Huffines, in his video, attacked Abbott for allowing Texas Youth Connection, a division of the Department of Family and Protective Services, to host the page with the suicide hotline and LGBTQ youth resources, including a site titled “Gender Identity and Sexual Orientation.” Huffines declared, “These are not Texas values; these are not Republican Party values. But these are obviously Greg Abbott’s values.”

Huffines posted a link to the video on his Twitter page, saying “It’s offensive to see @GregAbott_TX use our tax dollars to advocate for transgender ideology. This must end. #txlege”

Within hours, the Insider notes, the Gender Identity and Sexual Orientation page was deleted from the site and “shortly thereafter, the entire Youth Connection website was also disabled.” The purpose of the Texas Youth Connection website is to help youth prepare for life after foster care and it included resources for housing and education in addition to the LGBTQ resources.

Now, after about two months, the Houston Chronicle has used open records requests to obtain emails in which Family and Protective Services employees discussed removing the Gender Identity and Sexual Orientation page  “as a direct response to Huffines’ video, right before the page was taken offline,” Business Insider reports.

The emails include one from Family Protective Services’ media relations director, Marissa Gonzales, to Communications Director Patrick Crimmins, 13 minutes after Huffines tweeted about his video, warning that the video was “starting to blow up on Twitter.” Crimmins then emailed the web and creative services director suggesting that the page be taken down or revised.

Huffines has taken credit for getting the website disabled, telling the Chronicle: “We aren’t surprised that state employees who are loyal to Greg Abbott had to scramble after we called their perverse actions out. I promised Texans I would get rid of that website, and I kept that promise.”