Standing out in the crowd 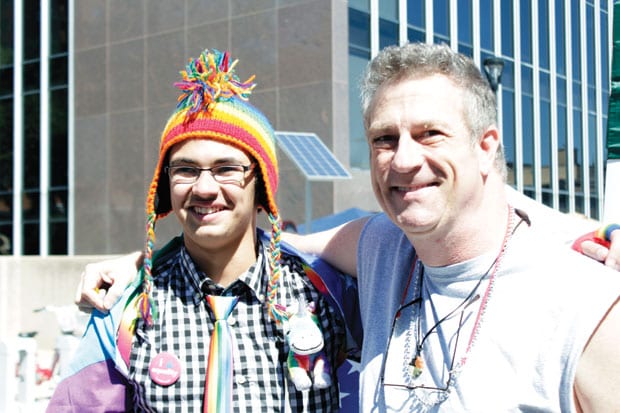 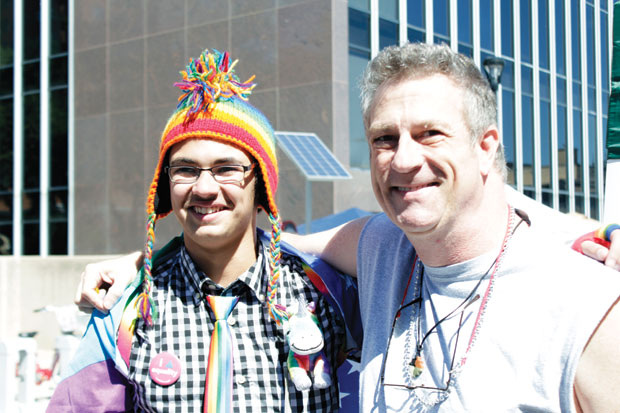 Xavier Khan’s life changed in 8th grade when his mother found a text message exchange in his cell phone — with a guy. He told the guy, “I love you.”

When Khan returned home that day, his mother asked to see him in her bedroom.

Now 15 years old and a sophomore at O.D. Wyatt High School, Khan didn’t know that day exactly why his mother wanted to talk to him. But he knew she regularly went through his phone. The thought she may have found “those messages” crossed his mind.

Walking to her bedroom, “I was so nervous I was almost in tears,” he recalled in an interview this week.

Khan entered his mother’s room, sat down and waited. She wanted him to say it — “I’m gay” — but he was too nervous. He couldn’t say it.

Khan said that coming out changed his life. It also taught him to delete his message history, he laughed.

Now, by day, Xavier Khan is a full-time high school student who plays the violin, has lots of friends and, with the help of a few mentors, successfully founded his school’s now-defunct gay-straight alliance. By night, he’s chasing his siblings, doing homework and taking care of more than his fair share of household duties.

David Mack Henderson, president of Fairness Fort Worth, said the fundraiser celebrates community leaders who “pay it forward,” and who demonstrate what it takes to advocate for LGBT services in Fort Worth as well.

Henderson said the fundraiser will address the needs of the rapidly growing city, the 16th largest in the country.

“People would ask me, ‘Why don’t we have services like Dallas?’ I’d reply, ‘We need to work for them,’” Henderson said. “We don’t have an LGBT community center. Nor do we have a program like Youth First Texas.”

Henderson said he hopes the fundraiser and ceremony will be an annual event to help fund those very priorities.

An inspiration
Khan stands out among the honorees, most of whom have been battling ignorance and fighting for LGBT equality for a long time. For one, he’s 15. For another, he’s been out and an advocate only for a few years.

Sharon Herrera, a LGBT advocate who works for the Fort Worth Independent School District, said she knows why he’s being honored: Khan gives her hope.

She said she formed LGBTQ Saves, of which Khan is a member, because of students like him.

“He calls me his ‘Fairy Gaymother,’ Herrera said of Khan. “I’m so proud of this young soul.”

Being honored as a visionary takes guts. It requires one eye on the present and one looking to the future. Not everyone can do it. Even as “youth are catching up with the times,” it’s those like Khan “who, in many cases, are surpassing it,” said Henderson.

Henderson said he first met Khan after the student contacted him on Facebook.

“He was 14 years and a few days old, and he blew me away,” Henderson recalled. “He was about to be a freshman at O.D. Wyatt, a pretty tough school, and was prepared to march into the principal’s office to start a GSA. I never had one-half of the confidence at his age when it came to sexual orientation.”

Khan said starting a GSA seemed “like the thing to do.” Almost immediately he faced pushback from the principal. But teachers, many of whom Khan said were supportive, recommended he contact Henderson and Herrera.

The duo gently pushed the principal to talk to Khan about the GSA, which ultimately formed.

“We just nudged the principal,” Henderson said, crediting Khan for doing all the work.

A year later, the school’s alliance is no more. “Students said they’re not able to help. They’re too busy,” Khan said. “Or they say they don’t want to ‘seem gay.’”

Khan’s not holding grudges against his peers, though his tone indicates clear agitation with them. Asked about his support network without a GSA, he approached the question cautiously, not wanting to cause strife.

He humbly credited a good support system among his “hundred or more friends.” And he is thankful for amazing and equally supportive teachers.

Henderson’s another mentor. Henderson said he took the “good-natured, inquisitive and inspiring” student under his wing with Khan’s mother’s consent.

As a mentor, he’s keenly aware of the skill set necessary for navigating contemporary challenges facing LGBT youth, like the one Khan faced a year ago with his principal.

Khan, an active participant in PFLAG and LGBTQ Saves, said he would love to eventually be a mentor as well. But one look shows he’s doing it already: A closeted friend recently asked him how to come out. Another friend wants to join PFLAG because he “always talks about it.”
And it’s that spirit, that willingness to stand up and stand strong when it counts, that makes Khan — despite his young age — worthy of the honor he is receiving. It’s also what puts him in position to become a leader for tomorrow’s LGBT community.

This article appeared in the Dallas Voice print edition October 17, 2014.