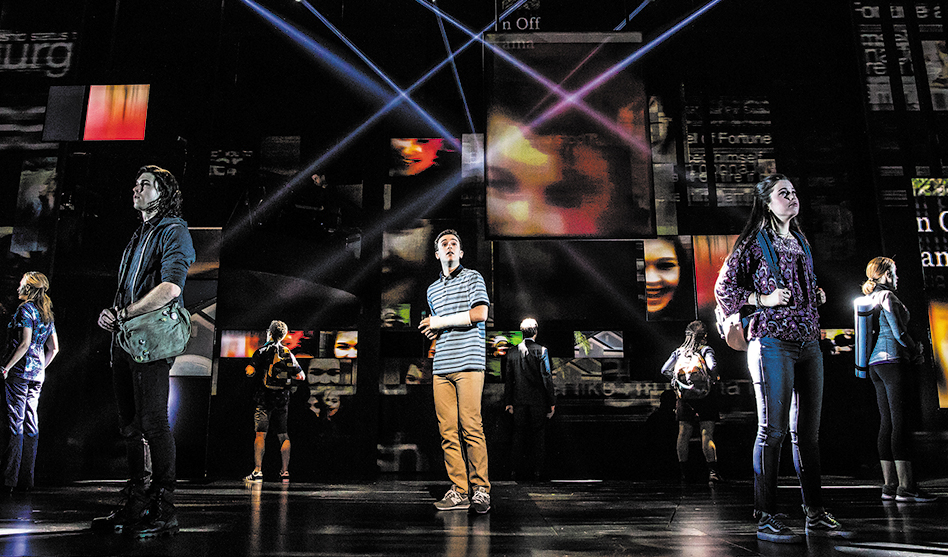 I suspect many local theater companies produce farces — especially the omnipresent Marc Camoletti pieces Boeing Boeing and Don’t Dress for Dinner — because they seem like no-brainers: Usually one set, smallish casts, and comedy is an easy sell. What could be easier?

Wrong — what could be harder?

Farce only works when it works. When it doesn’t, it congeals onstage like turkey drippings in a disposable pan. Timing is everything, and it’s difficult to maintain the pace. And because most farce is driven by unlikely plot turns and reed-thin character development (the more stereotypical, the better), if the action doesn’t crackle, it dies.

I’m happy to report that nothing dies in Theatre 3’s production of Michael Frayn’s Noises Off — not the laughs certainly, which ring out through the Quadrangle like church bells. This is farce as it’s meant to be played.

It helps immeasurably that Frayn’s structure is so clever: Act 1 is the final (only) dress rehearsal of a stodgy English comedy mounted by a dysfunctional troupe of third-rate actors in Wichita Falls (this production adds some brilliant Texas twangs to the set-up). Act 2 is set backstage during a performance about a month later, when tensions are frayed and bed-hopping has led to jealousy and misinformation (and some good but unfortunate information). Act 3 is the play again, this time the final, on-its-last-legs performance, where everything — everything — goes disastrously wrong.

T3’s staging is exactly how farce is supposed to work, executed by a strong cast, including Michael Federico the frustrated director and Kristin McCollum as the housekeeper/producer of the show. The real stand-out, though, is Tadeo Martinez as Garry. The role as written is an inarticulate, none-too-bright, emotionally vulnerable actor, but Martinez tweaks it by having him as a fast-talking Mexican whose English becomes convoluted with Spanish that he rattles off like a tommy gun. He’s also masterful in the physical realm, and alongside the rest of this talented bunch make for a delightful night of comedy.

Evan Hansen is a socially awkward high school tasked by his therapist with writing himself a letter each day in which he cheers himself up. He hates doing it. One, which begins “Dear Evan Hansen,” falls into the hands of a troubled classmate, Connor Murphy, who has the letter on him when he kills himself. His parents think it was a suicide note intended for his heretofore unknown “best friend” Evan, and as an act of emotionally generosity, Evan lets them think that.

But he gets something out of it as well. His working-single-mom doesn’t have time for him, though she clearly cares, while Mrs. Connor dotes on his every word; he’s popular at school for once. Soon Evan’s fibs become elaborate charades, then outright deceptions; social media figure into it, as well as the cultural need to insert one’s self into a crisis. Everybody is using everyone else; nobody sees their behavior as even slightly manipulative (except, ironically, Evan).

A major Tony Award-winner from a few years back, Dear Evan Hansen, pictured above — making its local debut at Fair Park Music Hall through Sunday — is a smart, modern musical about living in the 21st century, touching on everything from income inequality to how we medicate children to school-wide trauma and emotional health. Its signature song, the Act 1 closer “You Will Be Found,” is as near to an anthem for hope as Broadway has produced in a decade. It’s definitely worth seeing.

It is not, however, the unmissable, magical phenom you have heard about. The production is technically creative and the score is good, but there’s also a sameness to many of the songs. And while the cast ultimately delivers, their volume, especially in Act 1, wasn’t quite where it needed to be. (It’s a chamber musical, only eight roles.) You can’t help but like it, even admire it. But love it? Closer call. 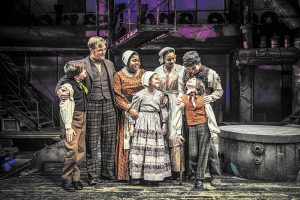 I’ve probably said this for a few years, but I think it’s time for Dallas Theater Center to reconceive A Christmas Carol, its annual holiday tradition about Scrooge, the Cratchits, four ghosts and good cheer. By my count, this is the 11th year of Kevin Moriarty’s industrial take on the business of Scrooge and Marley (what was a counting house in Dickens’ novella), and the set and effects have become too familiar unless it’s your first time. It helps that DTC has taken to re-casting the leading role most years (this time, Brandon Potter is Ebenezer), and getting new directors and music cues. But for me, the show has lost some of its charm.

But it has also regained some, at least as compared to last year’s production, which was especially disappointing in many particulars. New director Joel Ferrell has fixed some of those, especially in the casting. Ace Anderson as Marley (young and spectral) is a hoot, and his entrance gave me one of my first real scares since the show was back the Kalita. There are some fine choices by the actors, especially Ghost of Christmas Past, that enliven the familiarity. However there are limits to how much warmth this production can wreak on my heart at the point. It’s not a humbug… but it is time to say “bah.”

There are few new plays I’ve seen this year that I wanted to like as much as Queen of Basel, Kitchen Dog’s area premiere of Hilary Bettis’ 2017 updating of Strindberg’s Miss Julie. I’m not sure why; I’ve never been much of a fan of Miss Julie, one of the early examples of naturalism in theater. Its characters’ motivations have always struck me as opaque… maybe a lot is lost in the translation. But that’s the potential of an update with a contemporary twist: Discard the stuff that doesn’t work, modernize the language, reflect your current audience in universal themes.

Queen of Basel aims for just that. Set at the Miami art festival (which in less than two decades has become a major social hub in the South Florida city), it concerns Julie (Kat Lozano), the heiress to a real estate empire but one not taken quite seriously by her dad or his cohorts. She befriends a waitress in her dad’s hotel, a Venezuelan immigrant named Christine (Stephanie Cleghorn Jasso), who in turn enlists her Cuban-Haitian boyfriend John (Lee George) to help Julie avoid the paparazzi. Issues of class, identity, nationality and power struggle. It has all the makings of an explosive social critique.

But it falls flat. And I’m not sure why.

Partly it’s because Bettis doesn’t do much by way of setting up the locale. You need to know a fair amount about Art Basel, and second-gen nouveau riche, and even Miami neighborhoods, to absorb many of the details. But a lot, I think, is due to the residuals of Strindberg’s original, which Bettis hasn’t overcome. I kept hoping for improvements in the structural flaws, reasons to like the characters, more humor. What I did get was an amazingly emotional performance from Jasso, the one character whose behavior eventually begins to make sense. Her desperation is searing. The rest feels only like missed opportunity.