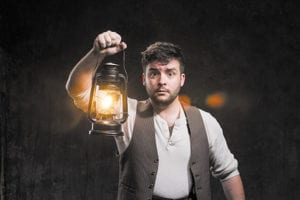 Among the shows at the Festival of Independent Theatres is The Boxer, starring Jeff Swearingen and presented as a kind of silent film, including actual video. Well, two other shows at FIT cross-pollinate those elements: Fiddler’s Cave is Dustin Curry’s wordless pantomime about a man who awakes in a strange place with no memory of how he got there until he sees a silent film of his life; The Caveman Play, written by Swearingen (who also plays a part) deals with another strange place to wake up in: Trump’s America.
Curry’s one-man performance (he also wrote it, with B.J. Cleveland directing) is a lovely bit of tomfoolery, with his unnamed character finding himself in a traditional sad-sack situation a la Chaplin’s Little Tramp. He jolt awake and tries (successfully) to play a stringless violin, to keep water from dripping on his head (less successfully) and simply to climb out of this dank space (with the help of some unwitting audience members). For the first 15 minutes or so, it mirrors a circus act cum magic show, with Curry clowning and goofing with amusing visual jokes. But just as that has run its course, the story changes, and we see a film of Curry wooing (and losing) a girl. And suddenly, the cave becomes less a physical prison than an emotional one: How do you let go of someone you still love? It’s charming and tender, made more so by Curry’s welcoming face and deft sleight-of-hand. Fiddler’s Cave performs Thursday at 8 p.m. and Saturday at 2 p.m.
Complex relationships are also the subject of The Caveman Play, but of a different sort. It’s a Tuesday, and Ugh (Chris Rodenbaugh) is arguing with his wife. Will he apologize? Does he even know what he’s apologizing for? Well, nevermind, then, if you don’t know I’m not gonna tell you. The twist, of course, it that the Tuesday happened 265,000 years ago, before mankind mastered fire or agriculture, but wives were already nagging Neanderthals to take out the garbage. The more things change …
It’s not difficult to see where Swearingen is going with all this. It’s not just interpersonal relationships that have plagued us for millennia, but also the tendency of leaders to mislead, of folks to forget or ignore when they are being lied to, of progress to be undercut by syllogistic reasoning and craven demagoguery. That applies whether you’re planning to raid another tribe or cast a vote for president. The allegorical implications are unmistakeable (and, in case you did mistake them, pretty much spelled out at the end), but it’s the comedy that grows increasingly more poignant that gets you. The Caveman Play performs Saturday art 8 p.m.