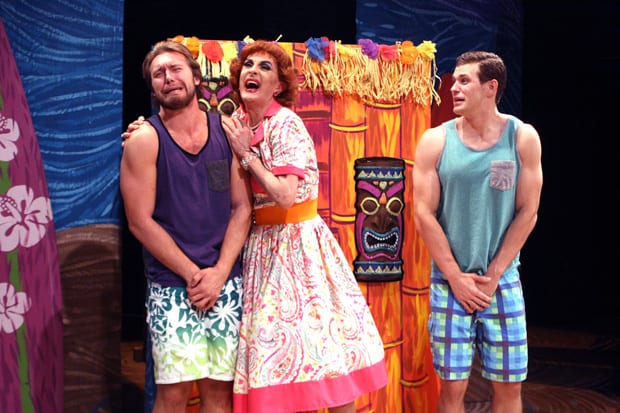 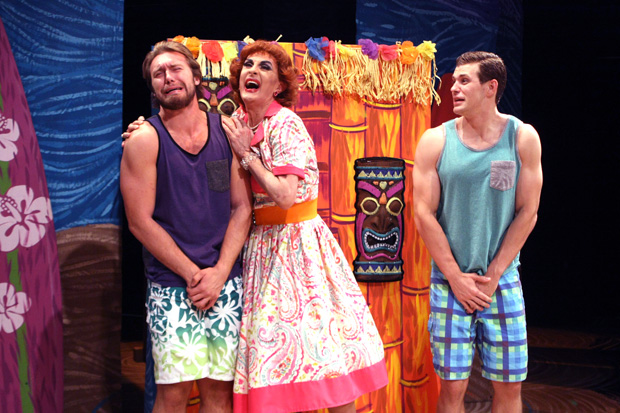 It is a testament to the complete saturation of absurdism in a Charles Busch play that literally any female character can effortlessly be turned into a man in drag. In the original off-Broadway version of Psycho Beach Party, Busch himself played the ingenue teen; in the film, he created a new role for himself as a female detective; and in the latest incarnation — at Theatre 3 until July 10 — Coy Covington dons a dress to play the ingenue’s mother, the kooky over-protective Mrs. Forrest. The lesson? Men in petticoats = comedy gold.
As its name suggest, Psycho Beach Party is a spoof of the dumb coastal comedies of the 1960s like Where the Boys Are and Beach Blanket Bingo — inane, predictable, empty-calorie bites of eye candy. But Busch’s construct is more subversive: He combines that quintessential ’60s film genre with two others (Grand Guignol melodramas and lurid slasher films), throws in a substantial dose of homoeroticism and a Marilyn Monroe wannabe (Grace Neeley, stealing her scenes), and voila! A pastiche punch that exemplifies camp.
The secret weapon of PBP is that it cannot be over-played, as Covington proves in his over-the-top scenes. He twirls and mugs and winks like Bette Davis taking a bong hit from Joan Crawford’s LSD-laced cremains. And Jenna Anderson as the flat-chested teen with more psychotic personalities than Sybil plays the ugly duckling loser with as much gusto as the crazy alter egos. And you really can’t under-estimate the appeal of a quartet of bikini-clad musclemen (Jacob Lewis, Blake Lee, Heath Billups, Zach Valdez) shaking their moneymakers with a seductive innocence that raises the temperature in the theater.
Director Bruce R. Coleman doesn’t hold back, tossing in every kitschy music cue and outrageous dance move he can, though the pacing flails wildly from madcap to stagnant. Then again, so did those beach movies. …