STAGE REVIEW of ‘The Cake:’ Life from both sides now 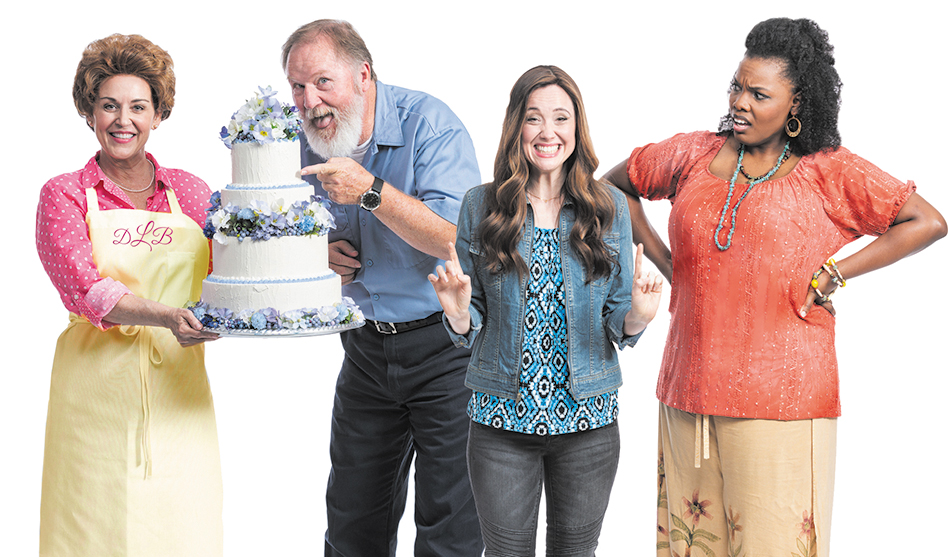 When a theater company like Uptown Players, which focuses on stories resonant to the gay community, mounts a play whose plot ostensibly deals with a bakery that refuses to make a wedding cake for a lesbian couple, you go in pretty sure who will be the hero (the couple!) and who will be the villain (that homophobic bitch at the bakery!). And yet from the first monologue of The Cake, which wraps up this weekend (and closes out Uptown’s official 2019 season), one thing is clear: You really like the baker. Her name is Della (Shannon McGrann), and she owns a small business in a small town in North Carolina. Her life hasn’t gone exactly as planned: She and her plumber husband Tim (Sonny Franks) couldn’t have kids, and she’s put a lot of her energy into baking. She waxes wistfully about the precision required to make a good cake, the time and the patience. And she’s aware of her own provincialism; her greatest victory is having just been cast in The Great American Baking Show, where she hopes to compete and take home the $20,000 prize, as well as bragging rights.

But on this day, her lone customer, Macy (Sky Williams), seems not just unswayed by Della’s passion for baking, but downright hostile toward her. Macy doesn’t eat gluten (for apparently political, not health, reasons); she clucks her tongue at Della’s homespun beliefs. Macy, after all, is a sophisticated Northeasterner; she lives in Brooklyn, for crissakes — coming south of the Mason-Dixon Line is tantamount to sightseeing in Syria.

Then in walks Jen (Natalie Young), the daughter of Della’s late best friend who herself moved to New York a few years ago. Jen, it turns out, is engaged to Macy and wants her dear friend Della to bake their wedding cake. Della is seized with surprise. “I’m just so busy,” she stammers, “I’m not sure I’ll have the time…”

We all know she could make the time. But her background, and the suddenness of this revelation, conspire against her. Macy sees Della as an avatar for bigoted crackers; Jen, while disappointed, understands.

And you realize: Della may not be a fierce ally, but she’s trying; Macy, though, is an embarrassment to the gay community — the truly judgmental character whose smug sense of missplaced moral superiority makes her the last person you wanna talk to at a party. That’s both the strength of The Cake and its Achilles tendon: We never really believe Jen could love Macy or vice versa because all we see is them in conflict about pretty basic tenets. But Della…? Well, maybe we’ve judger her too harshly…

The ambivalence that playwright Bekah Brunstetter creates — we kinda-sorta end up rooting for the baker — makes The Cake more than just some stentorian cheerleader for queer inclusion. It’s introspective and uncertain in a way that probably many of us are, especially around the Thanksgiving table. And it’s outright funny, even hilarious, before pivoting to lump-in-your-throat sentiment.

Much of the success of this production rests on McGrann’s shoulders. She’s less a steel magnolia than a dandelion, bending to the winds of pressure from her husband and her own upbringing, but aware that as her spores spread across the lawn, she’s spreading an unintended message while losing a part of herself. McGrann plucks at our sympathies with sunny Southern charm. And the racy scenes in Act 2 between her and Franks, where they finally confront the holes in their own marriage that have grown over time into chasms, are amusing and painful. By the end, the characters have been moved — not to the others’ sides, but at least closer together. And the audience has been moved, too.

At the Kalita through Sunday.