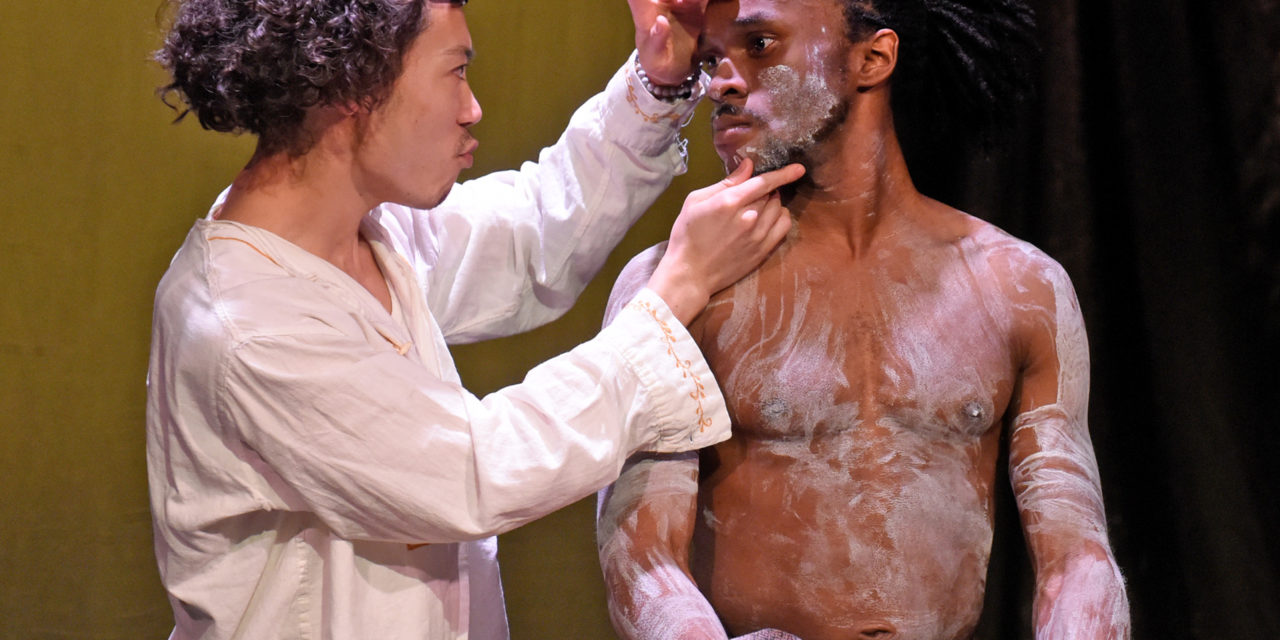 Mlima (his name means “mountain”) is an arrogant, magnificent African elephant — one of the last “great tuskers,” a beast of near perfect proportions, especially his great ivory tusks, which to a certain class of people might as well be the Maltese falcon, the Hope diamond or Gollum’s “my precious:” An intoxicating commodity of unique qualities, desired as much for its exclusivity as for its beauty. Mlima lives on a Kenyan preserve, but he can’t be fully protected by the poachers who track him. Within the first 15 minutes of Mlima’s Tale, now at the Kalita’s Bryant Hall from Second Thought Theatre, the elephant is butchered, his body harvested and his carcass abandoned to rot in the savannah sun.

But that’s not the last we see of Mlima: He lurks on the stage, more or less continuously, for the next hour, haunting the corrupt officials, greedy traders, desperate hunters, incompetent bureaucrats and shady businessmen and diplomats as his tusks are sold, smuggled and transformed in the name of art.
Lynn Nottage, who has two Pulitzer Prizes for Drama to her credit, is a playwright who writes about big ideas in ambitious, artsy ways, but Mlima’s Tale takes her sense of social justice to literal extremes which undermine its value as theater in service of its moral outrage. It plays more like a live-action public service announcement — “anatomy of a poaching” — than a piece of compelling drama. (I wasn’t surprised, after leaving the theater, to read in the program that the play was inspired by an article called “The Ivory Highway;” it quotes statistics and structures scenes as lessons, though I suspect she’s largely preaching to the choir.) The oblique epigrams projected as supertitles between scene divisions don’t add much to our understanding, and some are just folksy truisms.

One of the blindspots of the play is how Mlima is used once he is killed — a spectral force who touches (physically) anyone who bears ethical responsibility for their bad behaviour; each person so touched pauses, seemingly aware of the curse that has befallen them. Only there appear to be few consequences for any of them — there is no grand comeuppance, no expiation of Mlima’s tragedy, no Heavyside Layer where his sacrifice is exalted. It’s the rough equivalent of your mom telling you to “think about what you did” when you don’t feel badly at all.

Despite its weaknesses as a play, this production of Mlima’s Tale has many things to recommend it. The evocative, ritualistic movement of Mlima’s opening monologue, as the actor, McClendon “Mickey” Giles, bounces and roars, in a piece of physical bravado acting that you can’t look away from (especially in the painful sequence when his ivory is “carved”). Christopher Lew (especially when he is playing Chinese, and later Vietnamese, ivory traders) does a great job, as does Kris D’sha. And musician Nigel Newton, who composed the score and performs the marimba and other percussion instruments, is a star himself. The underscore really makes you care about the horrors of poaching, even if the play is a bit stodgy in how it gets there.