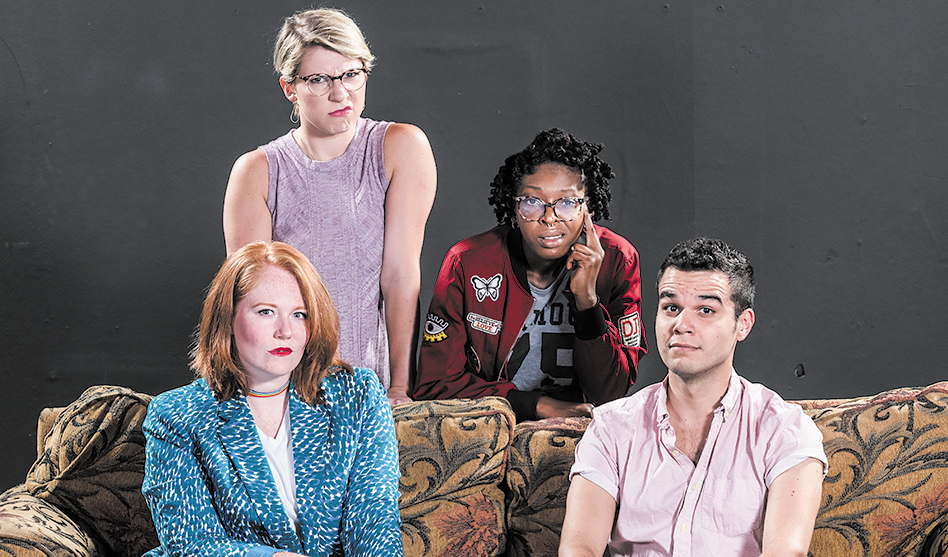 The bright spot, fittingly enough, is Bright Colors and Bold Patterns, a solo piece starring Paul J. Williams as Gary, a middle-aged Angeleno on a weekend trip to Palm Springs for the wedding of one member of his social circle. I hesitate to identify the intended as a “friend,” because you sense Gary doesn’t have many friends — he has a network of people he has known a long time. He won’t allow anyone to get close enough to him to see his vulnerabilities. But his soft spots are pretty apparent to us. Gary is a chatterbox, which masks loneliness and jealousy. He prattles on about a new young boyfriend (we suspect he’s making him up) and nitpicks the wedding invitation, the living arrangements, the traffic. He barely slows down long enough for the others at the villa (we don’t see them, but they are there) to weigh in.

Gary’s bitter cattiness will strike a familiar chord with a lot of audiences, I suspect. He drops cultural references like birdseed, has a studied way with barbs and surgically mocks to young newcomer for the weekend, Mac, with tired-old-queen allusions: “We celebrate things and make fun of them at the same time,” Gary mansplains. “We call it ‘gay.’”

This is an ideal role for Williams. He is practiced at the well-placed eyebrow raise and droll line-reading; even though Mac is not there, we can tell when he’s surreptitiously glancing at his junk. And he conveys the important subtext: That Bright Colors is a sadder play than it first lets on. It, like Gary, can feel “too-too,” but it’s also touching and resonant.

Also sadder, but in a different way, is a companion piece to this mini-fest: Cooties, produced by Flexible Grey Theatre Co. What a blah little play this is — under-written, over-directed and broadly performed, it centers on the college-aged residents of an apartment and their sexual escapades. If it sounds racy, it is … and isn’t. The play is both coy and crass, adult and juvenile, with weird stylistic choices (fourth-wall-breaking performance art pieces and bad lighting), bad cliches, stereotypical characters (the predatory lesbian, the virgin nerd, the bro-y straight dudes) and terrible pacing and structure. Among the cast, Sinclair Freeman has an engaging stage presence, but the play is just yuk.

Performances Saturday at 9 p.m. and Sunday at 2 p.m.