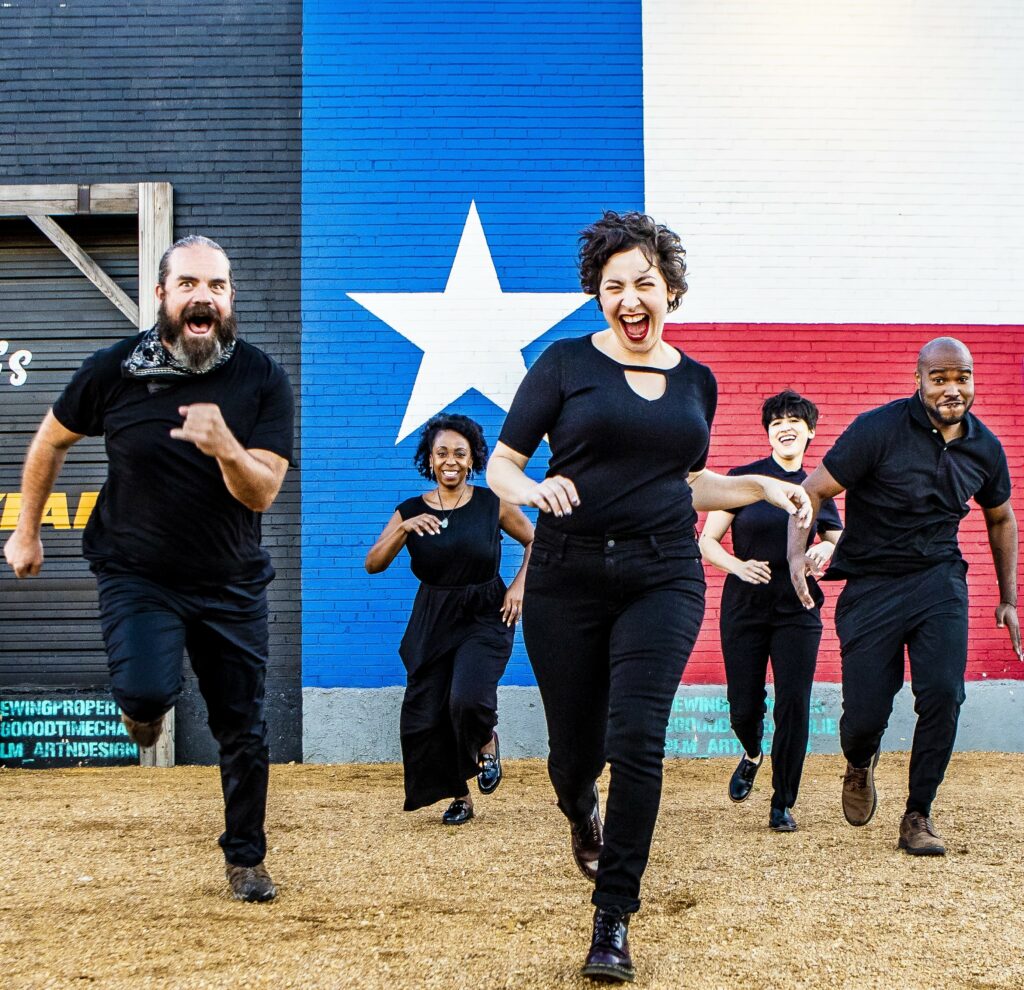 REVIEW: Kitchen Dog’s High Five is a fulfilling journey through the senses

Last week, Kitchen Dog Theatre had a heck of an opening with its New Works Festival premiere of High Five directed by Tina Parker. Essentially five plays in one that touch on each of the senses, the show was a cornucopia of humor, sadness, drama and even utter ridiculousness. Each short was commissioned by KDT from five different playwrights with a total cast of five actors.

The show began with “A Dance of Joy” (sight) by Matt Lyle. The humor and charm of this was a smart opener and also featured the entire cast in a wondrous ballet of physical comedy. Centered on Jeremy (Lee George), his dance is interpretive of his masturbatory act over what looks a vintage photo. His climax was strangely beautiful with streamers everywhere but then quickly became a laughfest as his family walks in on his me time.

“Dinner with Dee” (taste) by Migdalia Cruz was almost the opposite in every way. Led by Kat Lozano as Lydia and George as Dee, the play centered on a dinner between Lydia and  an angel of Death. The play was clever about its sensory use and far more low-key than its predecessor, but the two actors were so engaged in the moment that it often felt voyeuristic to watch. Of the five, this was perhaps the most intimate story but certainly one that rendered the audience silent.

The most powerful piece was certainly Regina Taylor’s “What’s Heard Between Words” (voice). Whitney LaTrice Coulter gave a powerful performance of a Black woman  who spits words and belts out songs as a journey of self-discovery by way of her ancestors and the modern woman. What Taylor packed into a short time was phenomenal and yet just right. Coulter’s singing voice was jaw-dropping but it was her almost rapping and quick handling of Taylor’s words that was astonsiihing to watch. Her performance was buoyed by the remaining four actors who served as a chorus and even as other voices in the character’s path.

The tone shifted to the semi-comic “Human Resource” (touch) by Allison Moore. Primarily featurig Max Hartman as a an HR guy who both admonishes and receives Lennon’s (Marti Etheridge) grievances about her work. The exchange isn’t always front and center. Hartman’s by-the-books character has his foot fetish to contend with and then his moment of bursing out into song is so random but Hartman unpacks all these unexpected layers with ease. Etheridge’s character is smarter than her HR superior and she played that with enough air of millennial superiority but also paired it with a bit of youthful naivete to balance out her character. To describe this as a semi-comic may not be doing it justice. The dialogque and solitary moments are rather serious but the funnier moments stood out more. Or perhaps dealing with human resources is a universal experience that hits too close to home and we can only laugh through that familiarity.

Bookending the show with more comedy was Jonathan Norton’s “Ode to Zeb.” The heaviness brought on by the three previous pieces was alleviated by this piece about the concerns and responsibilities of car air freshener trees. Yep. Coulter and Lozano led the piece as Bourbon and the newbie Daisy Fields. The remaining cast join in a flashback as Royal Pine, New Car Scent and Black Ice. They all have ties and tenure in Zeb’s vehicle which now belongs to his widowed wife. Norton’s absurdist story doesn’t give us anything too deep, but he charges each character with enough hilarity and humanity to stick with story all the way through. Coulter delivered some primo comic timing here where Lozano often had to keep up, but the energy and comedy of the piece was a high point to end on.

Through it all, Clare Floyd Devries’ set was effective with its ins and out and clever use of multimedia with Natalie Rose Mabry’s projection designs. Kitchen Dog does not disappoint in its use of space. Aaron Johansen’s lighting was on point ticking off every cue just right to puncutate the action on stage. Danielle Georiou’s rolling chair choreography in the final act was skillful and hilarious. High Five not only touched on each sense, but also tapped into a range of emotions in a mere 80 minutes.

High Five runs through Sunday at Trinity River Arts and then a filmed version of the show will be avaialble to stream June 30-July 3. For more information, click here.

Established in 1985 to represent Latinx communities, Teatro Dallas is now on the hunt for its next full-time executive artistic director.

Cora Cardona founded Teatro Dallas in 1985 with Jeff Hurtst and served as the artistic director for 33 years. Cardona dedicated much of her work to Mexcian theater as well as original productions centered on the Chicano experience. She created Teatro Dallas’ International Theatre Festival with emphasis on works from Latin America and the Iberian Peninsula. She introduced in 1986, for the first time in Dallas, Teatro’s signature Day of the Dead show.

We seek a collaborative and visionary leader who is ready to reach new levels of capacity and artistry for the company. The ideal candidate will be able to build upon the established foundation of the company, and be able to clearly articulate their artistic vision for the organization. This individual will select repertory from a broad range of artists and playwrights with varied backgrounds and styles, develop local actors as versatile artists, and help showcase their talents and skills. This candidate will also have the necessary skill sets in communication, management, coaching, leadership, programming, and production to fulfill that vision. A successful candidate will invest in existing relationships with potential guest directors and actors, funders, and collaborators, and will actively pursue new relationships.

Teatro Dallas is committed to the cultural empowerment of the Latinx community by representing our varied experiences, voices, and artistic expressions. Through high quality theatrical programming Teatro Dallas employs the power of theater to celebrate our diverse traditions while strengthening our community. Details about the position, including a job posting and salary information can be found on Teatro Dallas’s website and LinkedIn profile.

Candidates selected for interview will be required to present a proposed season of three productions, two community events and rationale for selection.

The new artistic director will begin as early as this summer.

The job posting can be found here.

In more theater job news, Theatre Arlington is now hiring. The company announced Monday it is looking for its new front of house manager. Preferred qualifications include two-three years in a customer service position and previous experience in a similar work setting.

We are looking for an energetic, fun, hard-working, friendly individual to become part of our Theatre Arlington Family.

This position is responsible for the sale of single tickets, season subscriptions group sales and special event tickets for the company; for the daytime staffing and running of the daytime box office.

This position is also responsible for all facets of the Theatre Arlington Bar (Beer and Wine sales) and coordination of front-of-house staff and volunteers.

To see a full list of duties and responsibilties, click here. For those interested, submit by email a resume and cover letter to executive producer Steven D. Morris.

Shakespeare Dallas: The Tempest, today in repertory through July 22 at Samuell-Grand Park. 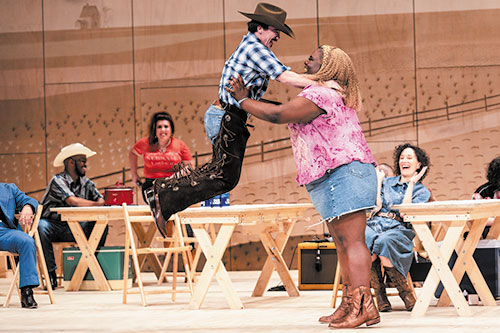 The cast of ‘Oklahoma.’ (Courtesy photo)

Pegasus Theatre: Death is a Bad Habit! (presented in RadioVision), through Saturday at the Bath House Cultural Center.

Rover Dramawerks: Artifice, through Saturday at the Cox Playhouse.

Broadway at the Bass: Oklahoma!, through Sunday, pictured.

Grand Prairie Arts Council: In the Heights, through Sunday at Uptown Theater.

Stage West: Into the Breeches, through July 3.

Shakespeare Dallas: A Midsummer Night’s Dream, in repertory through July 23 at Samuell-Grand Park.