Spirit of Giving: A Gathering to remember

The benefit gala commemorates 30 years of AIDS and its impact on Dallas, North Texas 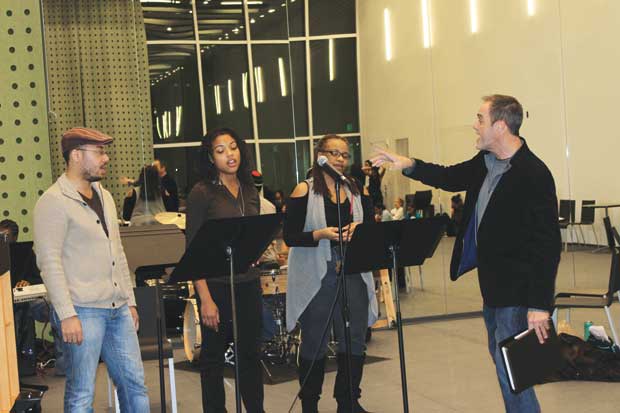 Charles Santos was having breakfast at Lucky’s with Jonathan Palant last summer when the now-former artistic director of the Turtle Creek Chorale mentioned that the chorale was born in the time of AIDS. This year, Palant told him, marks 30 years since the first cases of what was first known as

The comment got Santos thinking how deeply the arts — in North Texas and across the world — had been affected by the pandemic.

Some people might have spent time reflecting on how their lives and the world have changed; others might have felt compelled to discuss it with friends.

Maybe some might have written an op-ed piece of the “lest we forget” variety.

But Santos had a different idea.

As executive director of TITAS, which has brought art and music performances to Dallas for decades, Santos was in a unique position. He had access to the Winspear Opera House and a Rolodex that included every major performing arts leader in the region.

More than that, he had a passion to produce a show. And he wanted everyone within earshot to participate.

Santos started by gathering a core group of area leaders, including the Dallas Theater Center’s Joel Ferrell and Kevin Moriarty and AT&T Performing Arts Center external affairs director Chris Heinbaugh. They and others came up with the beneficiaries, how to approach arts organizations, the structure of the show.

“We wrote it, and it’s pretty remarkable, unlike the other events I have done,” says Santos. “We talked about what the pieces were and what we wanted to concentrate on.” 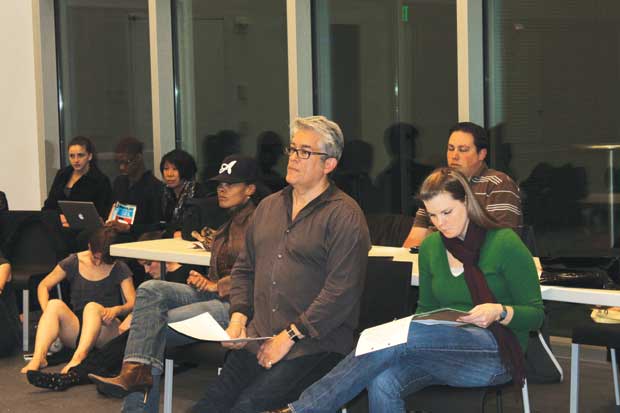 GETTING READY | Charles Santos, right, and Millicent Johnnie, assistant professor of dance at SMU’s Meadows School of The Arts, second from right, look on during a recent rehearsal for ‘A Gathering.’ (Tammye Nash/Dallas Voice)

The idea of the staging will be like a deconstructed musical that lays out three emotional “arcs” to be covered in two acts: First, loss, heroism and fury; second, faith, family, friends and caring; finally, action and change.

Thus was formed A Gathering: The Dallas Arts Community Reflects on 30 Years of AIDS, a one-night-only concert and fundraiser being held at the Winspear Opera House on Tuesday, Dec. 6.

Ultimately, about a dozen performing arts groups signed on, as well as many vocalists, musicians and other leaders. All told, more than 200 individuals will be taking part.

“Everyone’s been great,” Santos says. “ATTPAC donated the theater and waived all the ticket fees; a printer donated the programs and posters.

“I have been very clear that this is all being donated. When I was talking to one of the orchestras, they said they wanted to participate but couldn’t donate their time. I said, ‘I totally understand but I can’t use you.’ There are no comps — everyone is buying their own tickets. All the performers are buying tickets for their loved ones.”

The outpouring of support from the community has been reminiscent of the town of Bedford Falls helping out George Bailey at the end of It’s a Wonderful Life — a fitting metaphor during the holiday season. And while Santos has been grateful for the generosity, he says it really does not surprise him.

“One of the things the gay community learned during the early days of the AIDS crisis was that we had to take care of our own — we had to change the world. What a remarkable thing it was,” he says.

And it’s that spirit that has driven A Gathering.

“To my knowledge, this has never happened in this community, this many arts organizations collaborating on one event. Everyone has been so generous.

That’s why I’m interested to see what comes of it. I hope it generates more collaborative projects in our community. If these groups all say, ‘Let’s do another project, maybe in our own seasons,’ that would be excellent. In this economy, we are in a real period of wearing collaborative clothes.”

This kind of benefit wasn’t really new to Santos, though it had been a long time coming.

“When I was a dancer, I did shows like this,” he explains.

He put a performance fundraiser together in Austin that became an annual event. But since moving to Dallas in 2001, “I was focused on TITAS and didn’t do any more AIDS work. I haven’t done an AIDS benefit in years, so I’m really excited.”

It is perhaps for that reason that Santos threw himself head-long into producing this show with only three months of prep time.

“It’s a massive amount of work — I force myself to spend time on it every day,” he says. “Chris [Heinbaugh] has been great about keeping my thoughts grounded and relating it back to Dallas.”

Maintaining the focus on North Texas, in fact, was a key decision made early in the process.

“We all jointly made a decision to keep it local,” Santos says. “We all had the contacts to bring in headliners like Kristin Chenoweth and Bill T. Jones, but then that becomes a different animal. This is about our community.”
(The program will include a photo montage of locals who have died of AIDS.)

Nevertheless, Santos’ plan for A Gathering was a scope that extended beyond our borders — both Dallas’ and the gay community’s.

“One of the discussions I’ve had with everyone is that it doesn’t all have to be about the gay community and doesn’t have to be literal. We all know the impact on the gay community, but this is a global issue — gay, straight, single, married. It is a human issue.

“As we’re talking about a particular emotion, we noted that something taken out of context can be very helpful — it doesn’t all have to be Rent and The Normal Heart and Angels in America. There will be a microphone close to the audience where people [including former Mayor Laura Miller and various TV news anchors] will do readings.

“We include facts that deal with the impact of AIDS in Africa, so we have a piece of choreography that’s a tribute to [ composer and activist] Fela Kuti, who died of AIDS. We have a statement about discrimination. The opera is sending us a countertenor to sing for us. Some of the AIDS quilt panels will be flown in and be on display.”

While some tickets have been set aside for clients of the AIDS organizations served by the benefit, Santos’ great hope is that the entire community turns out to participate and reflect on AIDS.

“I hope the community comes out for it. It will be an amazing show, a real spectacular,” he said.