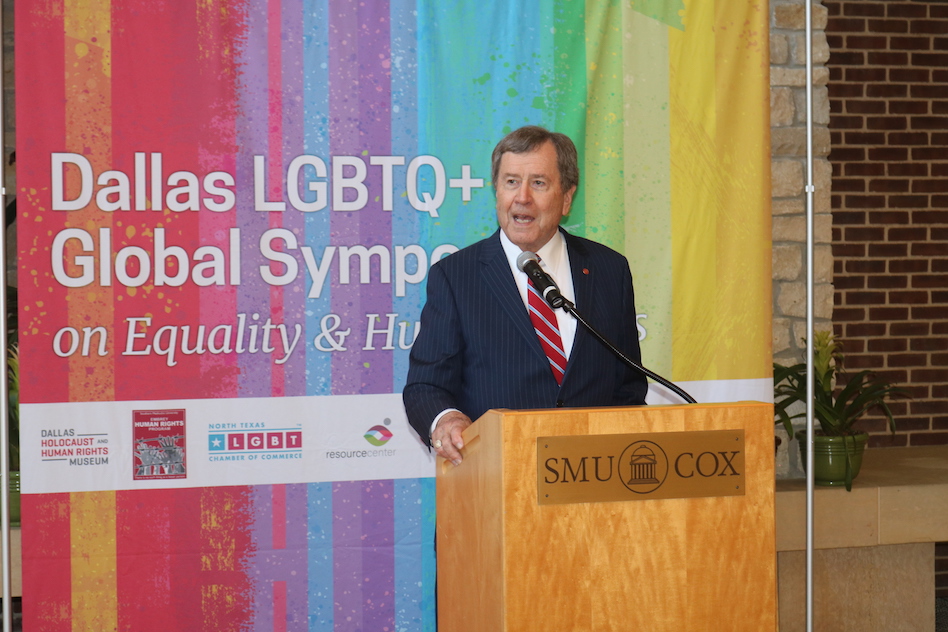 Fabrice Houdart, managing director for global equality initiatives at Out Leadership, said homophobia costs countries up to $100 billion a year. When people are out, they have improved health, improved job satisfaction and work relationships and greater commitment to their jobs. But for a variety of reasons, even at companies that have all the right policies in place, half of LGBT workers “stay in the closet, unmoved by diversity efforts.”

Rick Halpern, who heads the Embrey Human Rights Program at SMU, opened a session on the Dallas Quest for Equality with a timeline of events from Stonewall. Cece Cox moderated a panel on the history of the LGBT community in Dallas. Each panelist illustrated that history with a story about a single event.

Mike Anglin spoke about founding the Texas Human Rights Foundation and the fight against Section 21.06 of the Texas Penal Code, the Texas sodomy law. Candy Marcum talked about founding Oak Lawn Counseling Services with Howie Daire and the effect of the AIDS crisis on Dallas.

Chris Luna, who was elected to the Dallas City Council in 1991, talked about the effect of having LGBT council members and how many LGBT people were appointed to boards and commissions. Ray Jordan spoke about more recent Dallas history. He said that every time we make progress, there’s backlash, giving marriage equality as an example.

Helen Kennedy, executive director of Egale Canada, said after marriage equality, everyone went away. She said marriage was never her big issue, and she warned that we would have a variety of new and old issues to deal with, including transgender rights, sexism and racism.

Three diplomats spoke on equality through diplomacy. Wally Brewster, who lives in Dallas with his husband and symposium organizer Bob Satawake, represented the U.S. as ambassador to the Dominican Republic. Ambassador Miguel Diaz has come out since his appointment as President Barack Obama’s representative to the Vatican. And Ambassador Michael Guest was the first openly gay ambassador confirmed by the U.S. Senate, under President George W. Bush. He was stationed in Romania.

While openly gay James Hormel, a Bill Clinton appointee, was turned down by the U.S. Senate just a few years earlier, Guest said his appointment went through without much fanfare. Brewster said one way his appointment made a difference was his work to stop hate group leaders like Franklin Graham from funding hate in other countries.

Justin Nelson, president of the National LGBT Chamber of Commerce, moderated a panel on the business community and pointed out that business has led the way in equality.

Michele Thatcher, chief of human rights at Pepsico, said there’s “a big difference between “don’t discriminate” and “inclusion.” Toyota executive Julia Wada expanded that idea, saying, “Diversity is being invited to the party. Inclusion is being asked to dance.”

Thatcher spoke about dealing with boycotts of products like rainbow Doritos but said the company came out on the side of diversity.

Wada said this year Toyota flew the Pride flag in June at all 39 of its facilities across the U.S. In Plano, where Pepsico is right down the street and also flew a rainbow flag, other companies thought about why they weren’t. But in more conservative areas — yes, more conservative than Plano — flying a Pride flag made a loud statement about who they were as a company.

Dr. Paul Hain from Blue Cross Blue Shield said there’s no better time like during a good economy to get going with diversity and inclusion initiatives.

Beth Gerwe, North Texas Inclusion Leader for Deloitte and the only panelist who is LGBT rather than an ally, said when marriage equality passed, the company’s green dot logo became a rainbow. She said that was very emotional for its LGBT employees.

The event was presented by the World Affairs Council, Resource Center, the North Texas LGBT Chamber of Commerce and the Dallas Holocaust and Human Rights Museum. SMU organizations that helped present the symposium were the Embrey Human Rights Program, Cox School of Business, Dedman Law School and the Women and LGBT Center.