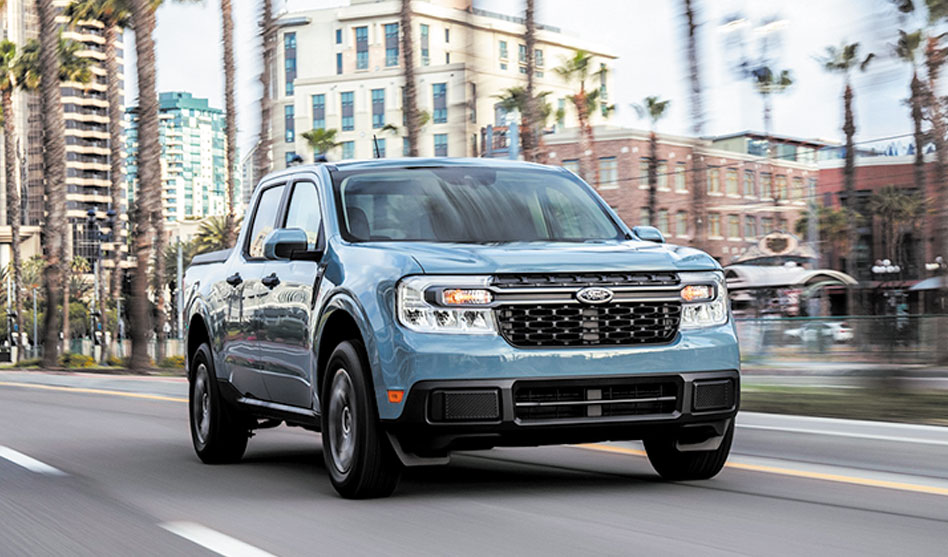 2022 Ford Maverick is far more than it needed to be

Ford makes the best-selling pickup of all time — its full-size F-150 — but not everybody needs to pull a 30-foot RV or haul a ton of rocks. The Ranger is a tidier package for city dwellers, but it costs nearly as much as an F-150 and certainly enjoys a tall drink of fuel. For those of us who really just need to tote a little mulch or a couple of bicycles, and still slip in parallel parking, the Ford Maverick is far better than it needed to be.

Ford could have shortened the Ranger platform and slapped a new body on top of its separate frame and solid rear axle. Instead, though, they made the better choice of basing the Maverick on the Escape’s and the Bronco Sport’s integrated crossover architecture. That gave it the right style, the tight handling and the basis for a segment-busting baby rancher.

Styling clearly connects it to its larger siblings, but the Maverick has its own look, too. A streamlined front with LED headlamps fronts a three-box design with crew cab, 17-inch dark alloy wheels and spray-in bedliner. The bed also features 10 tie-down hooks and a power outlet.

True pickup fans will notice something missing: the gap between the body and bed, and that’s because, well, the Maverick doesn’t have or need one.

Ford could have given the Maverick a black plastic interior with monocolor cloth seats. But it didn’t. Instead, the XLT gets two-tone cloth seats, a console with orange inserts and orange accents on the air vents, too. There’s a lot of plastic, but designers added interest with contrasting light and darker gray plus diamond patterns formed into the doors.

Some of the plastic looks like stone. Ford definitely made the most of every penny to keep prices down.

Nothing feels cheap, including the rotary gear selector, thumping audio system and intuitive swipescreen. The steering wheel is rubber but grippy thick.

Click devices into 4G Wi-Fi, Apple CarPlay and Android Auto. Beyond roomy armrest storage and deep door pockets with drink holders, the rear seat flips up for additional storage or to side-load bicycles. 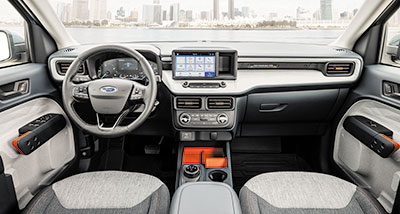 Safety is enhanced by automatic emergency braking, blind spot warning and rear cross path detection.
The base Maverick’s hybrid powertrain achieves a frugal 42/33-MPG city/highway, but the 2.0-liter turbocharged four-cylinder in our test vehicle puts a peppy 250 horsepower and 277 lb.-ft. of torque to the ground through the front wheels.

Say what? Yep, the front wheels.

Normally, I’d want all-wheel-drive in a pickup, but front-drive with traction control should handle virtually any inclement weather while delivering 23/30-MPG city/highway.

Plant your foot into the turbo for a giggle. Attacking on-ramps and accelerating away from unmentionable speeds is a joy, but that engine also allows owners to carry 1,500 pounds of payload or tow up to 4,000 pounds.

Unlike body-on-frame pickups, the Maverick twists and shouts as one cohesive form that feels very solid. I prefer the fully independent suspension on all-wheel-drive models, but you’d have to consult specs to out our front-drive edition’s twist beam out back.

Ford could have just made the Maverick a cheap little truck with a bargain price. Instead, it created a piece of art that handles like a sport sedan, blows compacts off the road and can still get a little dirty on weekends. In total, the Ford Maverick is far more than it needed to be, especially given a $20,995 base price or $26,420 as-tested. 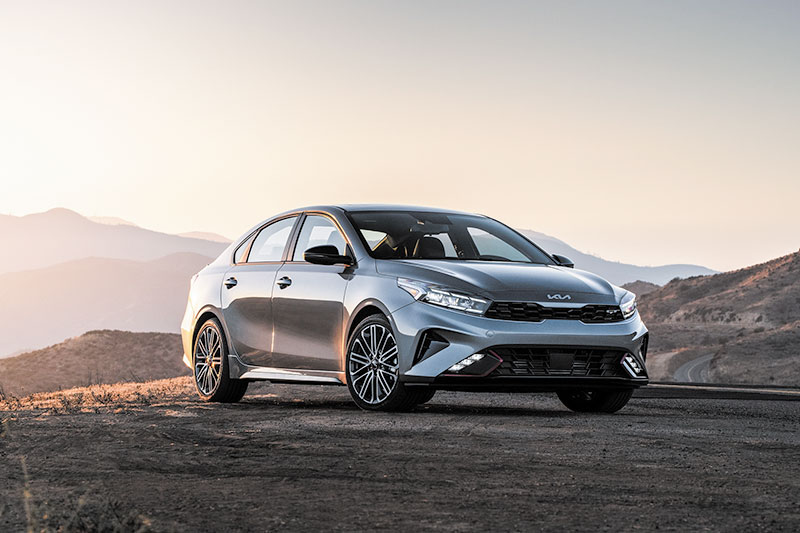 If you take a look at the Kia Forte GT and think it could just have easily been a Volkswagen or Audi, your mind isn’t cloudy. A good portion of Kia’s design team and engineering gnomes come from The Fatherland. And that rapid insolence carries over on the road where the car kicks it like it’s swallowing Autobahn — wherever your version of the famed motorway leads.

Beyond all of that, it spoils passengers rotten and presents a window sticker that reflects Kia’s reputation for value.
Autobahn-ready looks begin with angry LED headlamps, slashed lower facias and strings of running lamps. It definitely throws some attitude given it’s essentially an economy sedan with added zing. It is sophisticated though, with complex body sculpting, arching roofline and meaty 18-inch wheels.

Around back, a full swath of LED lamps, subtle decklid spoiler and under-bumper diffuser(ish) leave a strong impression as the Forte scats by. Red accents front and rear echo the VW GLI — an obvious competitor.

It’s all business inside, but that cool relaxed kind of business that’s fashionable today. GT brings deeply bolstered sport seats and thick leather-wrapped steering wheel with red stitching on both. Add to that heated and ventilated front thrones, dual-zone automatic climate control and a power sunroof.

Seats are SynTex but feel real and are easy to clean. Devices connect to the smooth Harman Kardon audio system via Apple CarPlay, Android Auto and wireless charging.

Kia recently made waves with the EV6 electric crossover and Sportage Hybrid, but the Forte GT proves the Korean automaker has mastered the art of powerful little powertrains. Behind the sleek face is a 1.6-liter turbocharged four-cylinder engine laying down 201 horsepower and 195 lb.-ft. of torque — all routed to the front wheels through a 7-speed dual-clutch automatic transmission. Shift it with paddles if you please, and click through the drive modes to configure the powertrain from Eco to Sport. 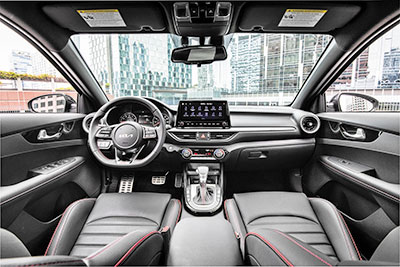 The rear is suspended by torsion beam, but you’d never guess it from behind the wheel. The chassis is firm enough for carving up backroads but compliant enough to soak up rough city pavement and sail over bridge expansion joints. I did driving duties on the way to a state park about 70 miles away, over which fast sweepers illuminated the competence of steering and suspension.

My neighbors could do without the sport exhaust rumble, but I kinda dig it.

If you’re going to buy an affordable sedan for daily commutes, you might as well get one that’s pleasing to the eyes and fun to drive on the weekends. It’s also up to very long days on fast interstates. Pick your destination, dial in directions and enjoy the journey.

A base price of $19,490 came to $26,840 well-equipped, making the Forte GT serious competition for the Honda Accord Sport, Toyota Corolla XSE, Nissan Sentra SR, Hyundai Elantra N Line and that other car from Germany.