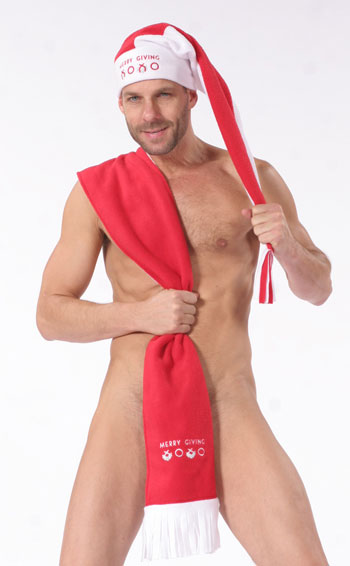 NAUGHTY SANTA | Michael Brandon returns to Dallas for the third time this year to launch his new lube line at Tapelenders.

Michael Brandon has been a big name in sex for decades. One of gay porn’s iconic stars, his DVDs, website and live performances have kept him in the public eye since the early 1990s — and his legendary prowess (and size) have kept young hearts fluttering for this now-46-year-old performer.

But lately, Brandon jokes, he’s feeling more like a vacuum cleaner salesman than a sex object. That’s because wherever he goes, Brandon always has his sample bag handy. It’s not Willie Loman, but big man’s Willie.

Don’t feel too bad for him. It’s actually a good gig.

The gay-owned company Product 54 produces a wide variety of silicone-based consumer products, from a cuticle treatment to one that helps divers put on and take off their SCUBA suits. The latter is also popular in the fetish community, “helping men and women put on their rubber gear,” Brandon says. “But my expertise is lube.”

Of course it is. And the signature product of the company is its 9×6 Lube — a name that, while it sounds like it might have been named after Brandon specifically, was actually already in place before he became associated with it.

After 9×6 came into being, Brandon was approached about an endorsement deal for the start-up company. He rejected the idea.

“I was with ID Millennium and told them, I’m really not looking for anything new [to endorse]. But someone slipped a bottle in my pocket. I tried it and I liked it. And I loved the stain-free aspect — very few silicone based lubes that offer that.”

That’s when he agreed to help market the lube — mentioning it in his tweets, giving away the product at his shows, etc. But Brandon saw great potential in the product and took a bold move.

“I saw some opportunities there, so I came home from a trip and told the president I wanted to invest and benefit from what I saw as a company about to explode,” he says.

“That means I am both a vested partner and the face of the brand.”

That has its downsides, as he knows from years as a celebrity spokesperson.

“When you become the brand, any and all questions start coming to you — whether it be a shipping problem or uses or whatever,” he says. “Of course, when they have any positive feedback, I receive that, too. Usually you have to say [to fans], ‘I’m just endorsing it — you need to direct your questions to the inner office of the company.’ I can’t do that anymore. I’m the vice president… I have everything to do with the inner office!”

This isn’t the first time Brandon has made a foray into the business world. In addition to running his own career — including the brand that is his reputation and his marketable appeal — Brandon was a partner in the Raging Stallion adult video company, which produced his Monster Bang line of DVDs (named for his sizeable member).

“It’s a very similar situation: Everywhere Michael Brandon goes, so does my product. It’s a win-win,” he says.

Of course, it helps that Brandon makes for a great salesman in the gay market.

“When I walk into a store, there’s a 50-50 chance they’ll recognize me — that’s my foot in the door. Then I tell them, ‘I want to offer them a sample of my 9×6 — that’s my second foot in the door.” He laughs. “Then I come do launch parties in sexy get-ups. In West Hollywood, I dressed down in a construction belt.”

Brandon will host his launch party Saturday at Tapelenders, the first retail outlet in the Dallas market to carry 9×6, with a holiday themed costume: Naughty Santa, a sexified bit of fur and red that Brandon tried out last week at an event and turned out the be a huge hit.

He’s happy to be back in Dallas for the third time since the summer. Before this year, Brandon admits, he had written off Texas as a forum for his talents; he could never get a club to book his live show and thought he had priced himself out of the market. But he’s already thinking of Big D as a second home — he loves visiting.

So what accounts for his sudden popularity here?

And love usually comes with a little lube.

Michael Brandon will be signing autographs and running a stocking-stuffer special (buy an 8 oz. bottle, received six 1 oz. bottles as gifts), but a “naughty and nice” gift bag with $75 purchase.

This article appeared in the Dallas Voice print edition December 9, 2011.