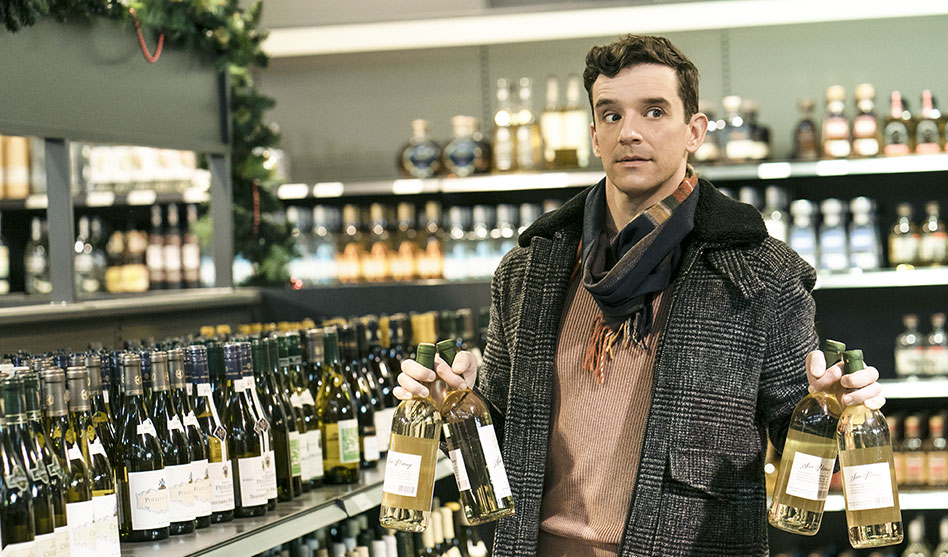 Michael Urie is Peter, a gay man’s whose family isn’t upset because he is gay, but because he is single in the Netflix holiday movie Single All the Way.

An interview with actor Michael Urie

Some of us first fell in love with Plano native Michael Urie when he played the lead character in Brian Sloan’s movie adaptation of his play WTC View, about a gay man’s search for a roommate in the wake of 9/11. Many others first laid eyes on him in the popular ABC sitcom Ugly Betty, in which he played Marc, the put-upon assistant to fashion magazine creative director Wilhelmina (Vanessa Williams). More recently, Urie could be seen on Broadway in the Torch Song Trilogy revival as well as alongside Udo Kier in gay filmmaker Todd Stephens’ acclaimed 2021 movie Swan Song.

Now in December, Urie stars as Peter, the romantic lead in Netflix’s entry in the LGBTQ+ holiday movie scene, Single All the Way.

Michael was gracious enough to answer a few questions recently about movie before its premiere.

Dallas Voice: I’d like to begin by apologizing for asking the most obvious question first, but what was it about Peter that made you want to play him in Single All the Way? Michael Urie: As soon as I read the script, I was completely charmed and delighted by it. I’m a big fan of Christmas movies, and I actually knew the writer, Chad Hodge, a little bit. I’d seen his TV shows and we knew each other socially.

So, I was excited to read it, and then I found it so charming, really funny and also very romantic. Every time I read it, I would get choked up and laugh out loud. 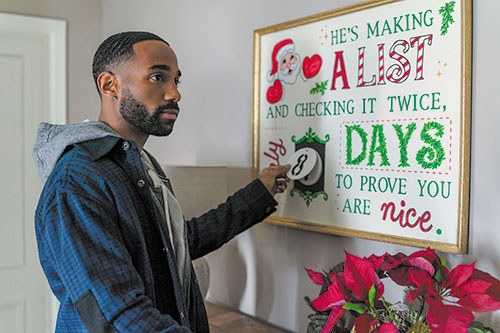 His problem was the same kind of problem that straight people have in Christmas movies. And I really liked that, I really appreciated that, because it’s still extremely gay and [laughs] as somebody who plays a lot of gay characters and is in a lot of gay projects, it was really meaningful to me to be in a project where the joy and the love and the comedy came not out of overcoming anything or hiding from anything, but from other normal ways. His conflicts are not unlike the conflicts of any old straight person.

As far as his family was concerned, their issue with him was that he was single, not that he was gay. Exactly! He’s not single because he’s gay, he’s single because he’s single. He’s lousy at dating, and that is a completely normal thing for a gay person to be. I was really charmed by the fact that this was going to be the first time Netflix went out with a story like this.

I loved Christmas when I was a kid. I loved the presents; I loved not having to go to school. Then when I left home and was single, I lost interest in Christmas. It seemed like a chore to me to have to get presents and tell people what I wanted. Then I met my partner, Ryan, and he comes from a family that loves Christmas. My family does, too, but his family really loves Christmas. And he loves Christmas. So, suddenly experiencing Christmas through his eyes and the eyes of his family was so delightful.

I fell in love with it again as a grown-up, and I think that’s partially because of how romantic it is. It’s so much nicer to do the Christmas stuff with someone to cuddle up with. 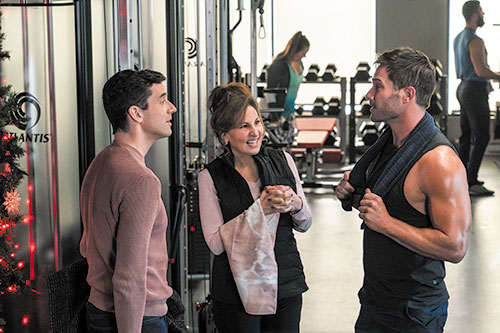 Speaking of romance, in Single All the Way you are playing a romantic leading man. What are the rewards, aside from having Philemon Chambers and Luke Macfarlane as your love interests, and challenges of such a part? Playing the romantic leading man is great because you have most of the lines [laughs], and you’re the guy with the problem. I’ve done a few movies that I was a lead of, and I had lots of scenes. But you don’t shoot in order, and if you’re a supporting character you only come in and out. But when you’re the lead, when it’s your story, as you’re preparing it, you can really get a sense of the whole thing.

So, I read the whole script. I wouldn’t just jump around to my scenes, because I was in almost every scene. So, I got a real sense of the arc, and it made shooting it so much easier, actually. Because I was able to really know my lines from reading it so many times all the way through, and studying, but also because I always knew where he was. We could jump around in the schedule, and I would know where Peter was in the story because I was so familiar with the whole thing. It really helped, as an actor, to know where I was.

Peter has a demanding career and active social life in LA but is willing to chuck it all for small-town living. Could you ever imagine doing something like that? I don’t think so. At the beginning of the pandemic, I tried to convince my partner to move to Palm Springs [laughs]. I don’t know that that’s necessarily a small town, and I don’t know that I thought we would go there forever. I thought, “Let’s go move there and when the pandemic is over, we’ll move back.”

I don’t know. I mean I really love the city. I had a great childhood, and I did enjoy living in the suburbs in Texas, but the moment I stepped foot in New York, when I was 17 years old, in Midtown, outside Port Authority with garbage and July heat, I was like, “I love it here!” It really is sort of my town and it’s hard to imagine that it would ever not be, but never say never.

Single All the Way is the second 2021 movie, along with Swan Song, in which both you and Jennifer Coolidge appear. In Single All the Way you get to have considerable screen time with Jennifer. What was that experience like for you? It was a lot more fun than my experience with her on Swan Song since [in Swan Song] we never crossed paths. I will say working with her is as fun as you would imagine, as surprising as you would imagine. On the one hand, everybody knows her thing, everybody sort of knows what she does. In fact, Chad Hodge, our writer, wrote the role in hopes that she would play it. 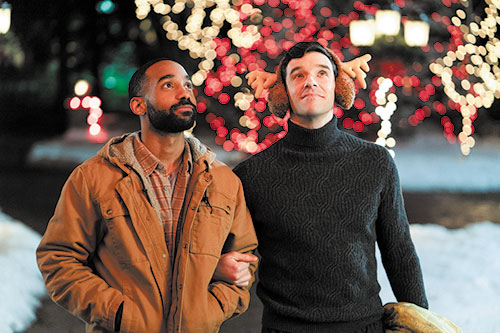 In the script, when it says, “Enter Aunt Sandy,” in parentheses it says, “Think Jennifer Coolidge.” That was always the hope and the plan. And yet still, knowing that it was written for her, knowing her body of work, she still surprises me. I still don’t know how she’s going to spin a line. And when she goes off-script, you have no idea what she’s going to say, and it’s always something amazing.

You mentioned the fact that Netflix is joining the fray of gay-themed holiday movies. What do you think of this trend of streaming networks creating queer holiday movies such as Single All the Way and 2020’s Happiest Season? I think it’s good, and it’s important. I think romance is not isolated to heterosexual relationships and neither is Christmas. The gays love Christmas, and the gays love Christmas movies. So, throwing them some, I think, is going to be really good. Because they’re so popular, I think providing a movie like this or Happiest Season to the cross-section of people who will watch any Christmas movie is only going to broaden people’s ideas and give people a real sense of how we’re ultimately the same.

The movie is not about how we’re different. It’s about the ways in which we are alike. Christmas, romance — we can meet on a lot of things, queer people and straight people. I think it’s exciting and inspiring to be part of that.

Finally, Michael, are there any upcoming projects you’d like to mention? I’m in the movie of Jersey Boys, the musical about Frankie Valli and The Four Seasons which played Broadway forever. We put the show up this summer and filmed it for a streaming service. Nick Jonas played Frankie Valli, and he was so good. It was a lot of fun. That’s going to be out sometime; but I don’t know when.