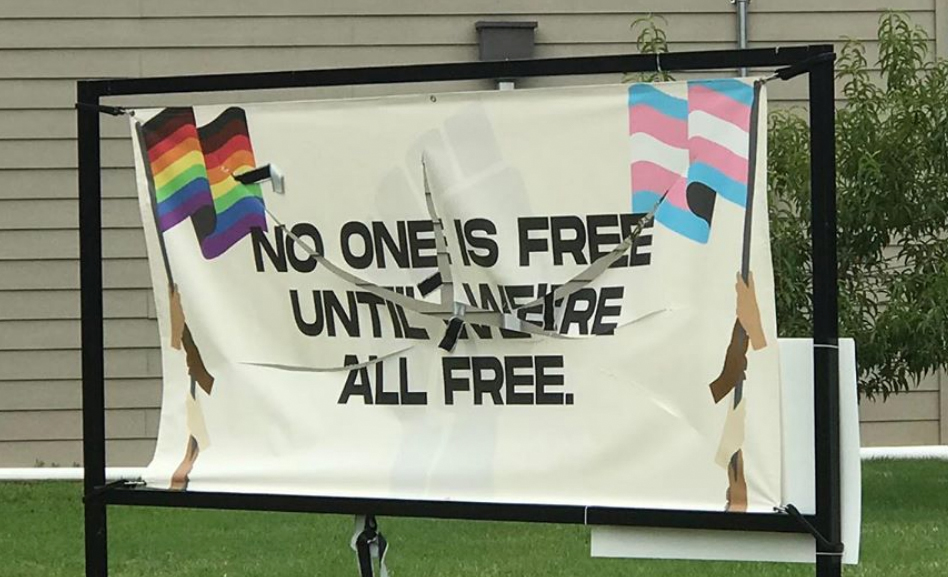 White Rock UMC’s sign after it was taped back together by the local neighborhood association president. (via the WRUMC Instagram)

“We are unapologetically open to those the church has forgotten and harmed. We believe that the table is open to all people. And we are in a neighborhood that works alongside us to ensure all folx are seen, valued and have the opportunity to flourish.
“This isn’t the first time one of our displays of welcome and inclusion has been vandalized. Several years ago we found racist, vile [things] painted on our marquee below an MLK quote. Our Pride flag that flies out front (installed after our denomination’s failed vote to fully embrace our LGBTQ+ siblings) has been stolen, damaged or torn by angry people who find it necessary to lash out. We are used to it. In fact, in my church office, I have several flags ready to be re-installed.
“If you are one of those people, we forgive you. Seriously. And we will get another banner printed. Probably a few. @vicsunesparza designed this for both our @owenwoodcampus and WRUMC. It stands on the corner to remind our neighbors that we are a striving to be a place where all can can be seen, valued, serve and come to know the Good News of Jesus Christ. Trans, queer, BlPOC folx. We are bound to one another, tethered together by our creator. The #Beloved community flourishes when we begin to #believe in a #theologyofmutuality. The Gospel demands that from us and in return we are learning how to demand it from one another. And 51 years after #Stonewall we realize how much work is still left undone.
“We are lucky (seriously, the luckiest) to be in a neighborhood that also values the need all have to #belong. It often shows up in subtle acts of love and generosity from our neighbors just being good neighbors. We try to be that to our community, because so many of you are that to us. Big shout out to the @lfhdallas president, Patrick, and his family for taping our sign back together. Thanks for the numerous voicemails left on my phone showing support and wanting to help. Stay tuned for ways we can create a more permanent sign of inclusion.
In solidarity,
@mitchellpb”

Sometime Saturday night or early Sunday morning, June 27-28, a sign at White Rock United Methodist Church promoting equality was vandalized in what may have been an anti-LGBTQ hate crime.

The church is located at 1450 Old Gate Lane.

The sign had a rainbow flag on one end and a transgender Pride flag on the other, with the words “No one is free until we are all free” printed between them. Some slashed the sign several times.

David Morrison, who sent this photo to Dallas Voice, said that while he is not a member of the church, he is working with the church and with the Little Forest Hills Neighborhood Association to coordinate some sort of fundraising effort to help pay for a replacement sign “or something even better.” Morrison also said that a member of the Little Forest Hills Neighborhood Association was at the church when he arrived, trying to tape the slashed pieces of the sign back together.

Dallas Voice has reached out to White Rock UMC for more information. We will update this post as information becomes available on either the vandalism or the fundraising effort to replace the sign. 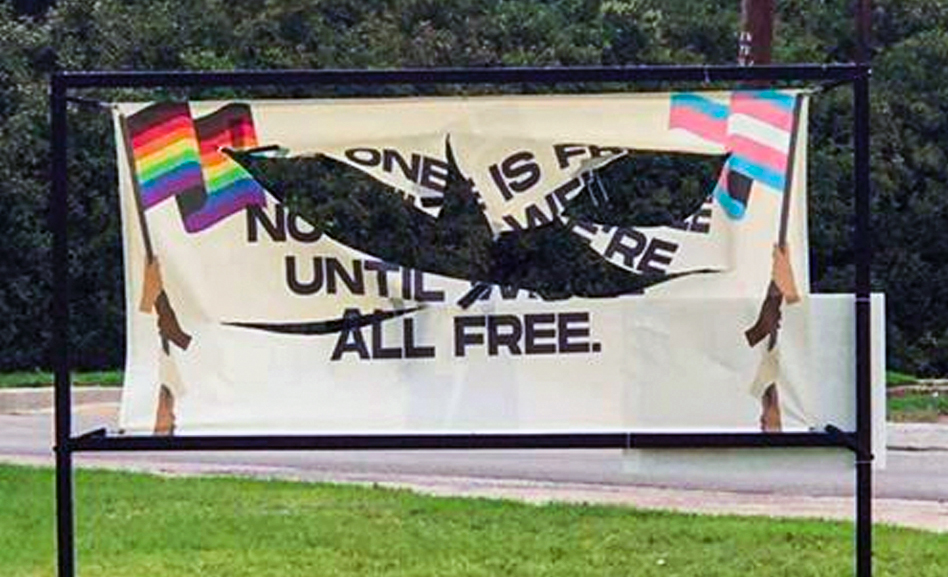 The sign after it was slashed. (Courtesy of David Morrison)