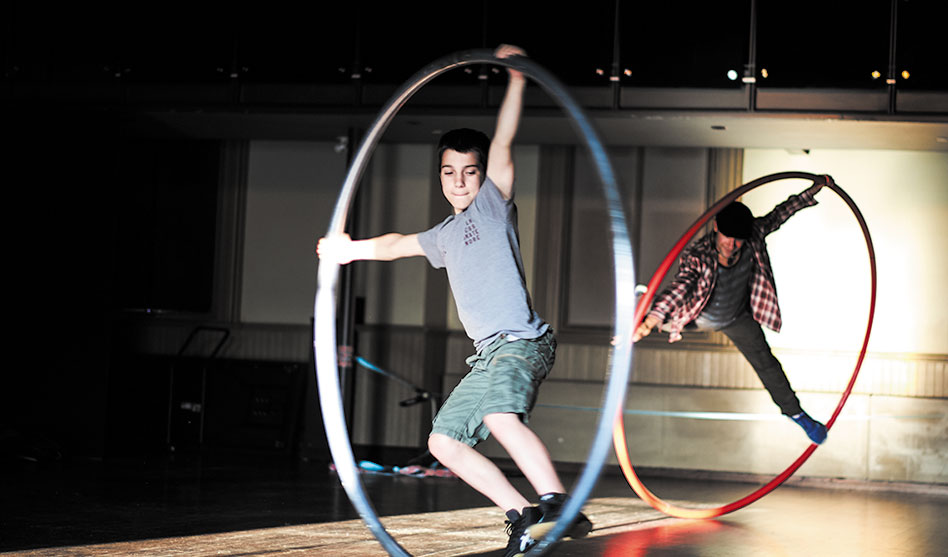 At a mere 52 minutes long, Lester Alfonso’s new documentary Circus Boy is short and sweet. There are many lovely moments in the film, yet Alfonso’s work also leaves many unanswered questions.

The story follows Thomas, a gay man in Canada who, with his husband Michael, is raising a teenage boy named Ethan. They never legally adopted the boy yet in their hearts, he’s their son.

Thomas is preparing for a visit from his mother, who’s going to meet Ethan for the first time. She’s also going to watch Thomas and Ethan perform in the circus acrobatic act they’ve been working on. Ethan has been training to be a performer with the Cyr Wheel. Thomas is his coach as well as coach to a number of other young people.

The film moves along cinema verité style, following Thomas and his mother as they drive home from the airport and as mom has her first meeting with Ethan. We learn that Ethan still has a relationship with his birth parents, with Thomas’ mom and Ethan’s mother meeting to talk about their boys. It all adds up to being a sweet, unflinching look at an alternative type of family who love and care for each other deeply.

And yet, so many questions go unanswered: Why does Ethan’s mom allow her son to move in with these two guys? Why does Ethan want to live with them, since he apparently has a decent relationship with his birth parents?

These issues are never addressed which leaves the film with an unfinished feeling. But what is included in the film is worth a look.

Ethan is a nice kid who loves his adoptive parents dearly. The fact that they are a gay couple is a complete non-issue to him. The bond between Ethan and his surrogate dads is a strong one, and it’s a nice thing to see. It’s also nice to see Thomas and Michael together sharing an intimate moment. This is a couple who love each other deeply.

Thomas’ mother, who the film does not name until the closing credits, is a likable woman who totally accepts her son’s sexuality and his relationship with Michael. She embraces both Ethan and his mom, who she meets with separately.

Ethan and his mom are never seen together in the film, and this also adds to the feeling of the film being incomplete.

Though it is a touching piece of work, the film would have benefited from a longer running time, which would have allowed auteur Alfonso to explore the relationship between Ethan, his mom and his dad.

But there are still many lovely moments. Towards the end of the film, as Thomas, Michael, Thomas’ mom and Ethan eat dinner, the mom recalls a time in the past when Thomas was working as a barista in the cafe at a Border’s Bookstore, a huge chain that is no longer in business. Each night Thomas would take his tip jar and give all his change to an older homeless woman who slept in the doorway of the store. As Thomas’ mom tells it, the woman turned to her and said “without your son, I wouldn’t eat today.”

This is Thomas’ mom expressing her deep love and admiration for her son. This kind of love is a recurring theme throughout the film, and it ultimately will leave most viewers with a warm and fuzzy feeling. The film poses the question What is family? And the answer is simple: Family are the people we love.

Circus Boy is now streaming at Apple TV, iTunes and Vimeo on Demand.