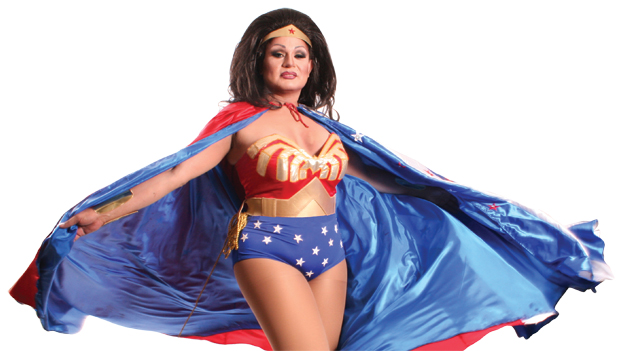 When Michael was a boy, his parents divorced and he went to live with dad, who worked all the time and was seldom home. So little Michael found a role model on TV.

“That’s when Wonder Woman came on television,” he recalls, referring to the CBS series starring Lynda Carter. “Wonder Woman was a second mother to me, one who taught me right from wrong in a way. She stood for something. Plus she was so statuesque and feminine and graceful, but still stern and strong. I watched that show religiously and as soon as the episode was over, I was back outside, reenacting what had just happened.”

The series ended in 1979, but by the time Michael had grown into drag diva Celeste Martinez, the Amazonian princess was still a powerful force. Since 1993, appearing as Wonder Woman has been the hallmark of Martinez’s drag act.

It’s not just a passing fancy, either. Martinez has every single Wonder Woman comic book since 1983. “When I got my first job, the first thing I did with my paycheck was get a subscription to Wonder Woman,” she says.

Martinez’s devotion has also made her a regular at Zeus Comics, the gay-run superhero store on Lemmon. Such a fixture is she there, Martinez even appears in the next episode of The Variants, the web-based comedy series set at Zeus. (See sidebar.)

“I’ve known [store owner] Richard Neal for years,” she gushes. “They are a fun group.”

But before her debut as a Web star, Martinez will show her patriotism this Independence Day weekend with a series of shows at the Rose Room — all in the guise of her hero, whom she sincerely tries to evoke onstage in spirit as much as appearance.

Martinez’s costume — golden lasso, bullet-deflecting bracelets, tiara, cape, boots and star-spangled panties, all in the colors of the America flag — is familiar to fans of the classic character as well as the TV series, but maybe not so much the new generation of comic readers. That’s intentional.

“With issue no. 600 [of Wonder Woman], they were trying to get a bigger audience so they updated her look, but the real Wonder Woman fans were not happy,” Martinez explains. “They are about to do another reboot with all of DC Comics characters, so as to make the original Wonder Woman fans happy.”

The timing of the show is fortuitous: Wonder Woman is a perfect image for the Fourth of July, Martinez affirms.

“She represents the best of humanity in the sense she’s non-judgmental and sees the best in everyone. She’s gracious and empowers strength and the best in all of us,” she says. “And she does it in red, white and blue.”

This article appeared in the Dallas Voice print edition July 1, 2011.