Shelley Luther is back, calling on bar owners to challenge Abbott’s order to close 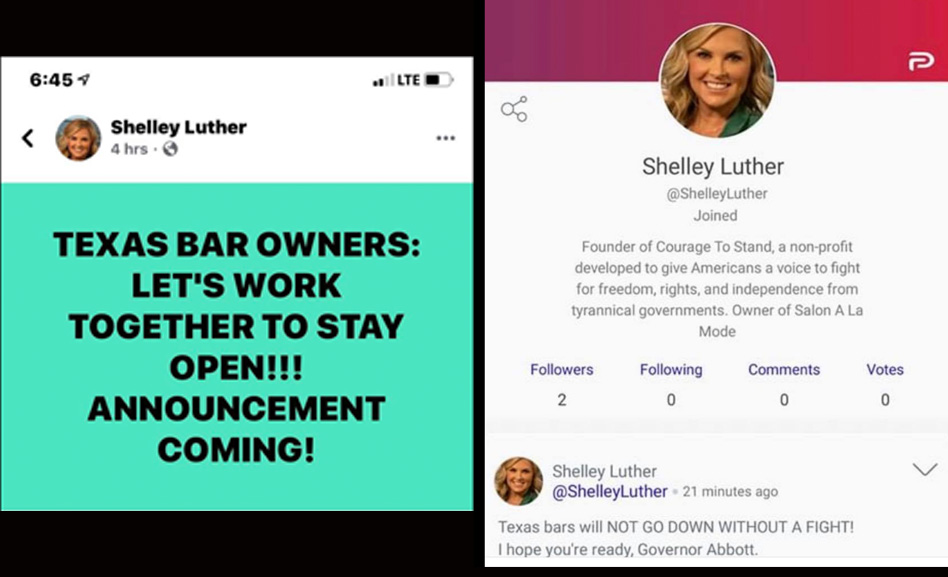 UPDATE: So, Shelley Luther is promoting an event called “Battle for the Bars: Free Our Bars & Restaurants Protest & Rally! Band Jam Out!” on Sunday, from 4-8 p.m. at the Machine Shed Bar & Grill, 6113 Hwy. 31 in Kilgore (close to Country Tavern). Shelley and her boyfriend Tim Georgeff will be there, although the post doesn’t say if their band will perform.

It appears that Shelley Luther, the Dallas salon owner who pitched a fit and pretty much pushed Gov. Greg Abbott into speeding up the process of re-opening Texas, is putting her newly-founded nonprofit Courage to; Stand to use by throwing a fit over Gov. Greg Abbott’s executive order issued today once again closing down Texas bars to try and stem the rising numbers of COVID-19 infections.

Shortly after, she posted again, encouraging people to visit her page on Parler.com, which Wikipedia describes as a “United States-based microblogging and social networking service launched in August 2018, as an alternative to Twitter. It has been noted for its base of Donald Trump supporters and for far-right, conspiracy and anti-Semitic content.”

Luther said in the post that Parler is “a better platform to speak and read real news.”

The post includes a screen-cap of Luther’s Parler page, which describes her as  “Founder of Courage to Stand, a non-profit developed to give Americans a voice to fight for freedom, rights, and independence from tyrannical governments. Owner of Salon A La Mode.”

It also shows a Parler post in which Luther declares, “Texas bars will NOT GO DOWN WITHOUT A FIGHT! I hope you’re ready Governor Abbott.”

A recap
Abbott, by the way, is the same governor who in May ordered local officials to stop enforcing the COVID-19-related restrictions — including requirements for places like hair salons to remain closed to stop the spread of the coronavirus — after Luther was cited for opening her hair salon anyway and then sentenced to seven days in jail on contempt of court charges for tearing up the citation. (She was never actually tried for opening the salon in defiance of state and county restrictions.)

Although Luther was taken briefly to jail, she was released about 48 hours later after Abbott had jumped into the fray, scolding Dallas County Judge for actually enforcing the executive order Abbott issued and then amending that executive order retroactively to eliminate the parts that allowed those violating the order to be cited and jailed. The Texas Supreme Court also got in on the act, ordering that she be released.

Abbott followed up by rushing ahead with the “re-open Texas” process, ignoring the benchmarks and warning flags he had, himself, outlined to allow business to re-open much more quickly than had been deemed safe, all in an apparent effort to placate Luther and those like her who declared that COVID-19 safety restrictions infringed on their life, liberty and God-given right to get sick and die, but not before infecting innocent bystanders.

Through it all, the right-wingers flocked to her cause, donating to a GoFundMe page that raised  more than $500,000 for the salon owner, who had already received an $18,000 PPP loan (even though the stylists in her salon are neither employees nor private contractors, but instead pay her rent to use the space) and lived on a half-million-dollar ranch with her boyfriend, younger daughter and a bevy of exotic animals. Even when it was revealed that Luther had been recruited by a newly-formed right-wing group looking for someone as a standard-bearer for their efforts to force the state to re-open. Even finding out that Luther did not re-open until after the group approached her and had already set up the GoFundMe, her supporters stuck with Luther and their cause. Lt. Gov. Dan Patrick donated $7,000 to her cause, and U.S. Sen. Ted Cruz showed up at her salon for a (really bad) haircut and some publicity.

Looking for the limelight again
Luther, who said she was using the GoFundMe money to establish her Courage To Stand nonprofit, stayed in the spotlight for a bit longer after the state began to re-open, including a trip to Laredo where she gave a grand total of $2,500 to two women there who had been arrested in April for providing salon services in their own homes and were facing stiff fines and jail sentences much longer than seven days.

But she had been pretty quiet since then — until today when she issued her rallying cry to the bar owners of Texas.
During the initial hearing in Judge Eric Moye’s court in May, Luther insisted that she had to open to the salon because her employees needed to be paid and she had to be able to feed her own children. (As noted already, Luther did not have any employees at the salon, and only one of her two daughters — who is 17 or 18 years old — lives with her.)

Luther said she was initially fighting to be able to feed her children and pay her employees. One would assume that her in upcoming effort to force Abbott to let the bars re-open, she will be fighting for the right to party. It will be interesting to see how Abbott, who championed her cause in May, will respond now that Luther is challenging him directly. One thing’s for sure, he can’t blame this one on Dallas County Judge Clay Jenkins or Judge Eric Moye.