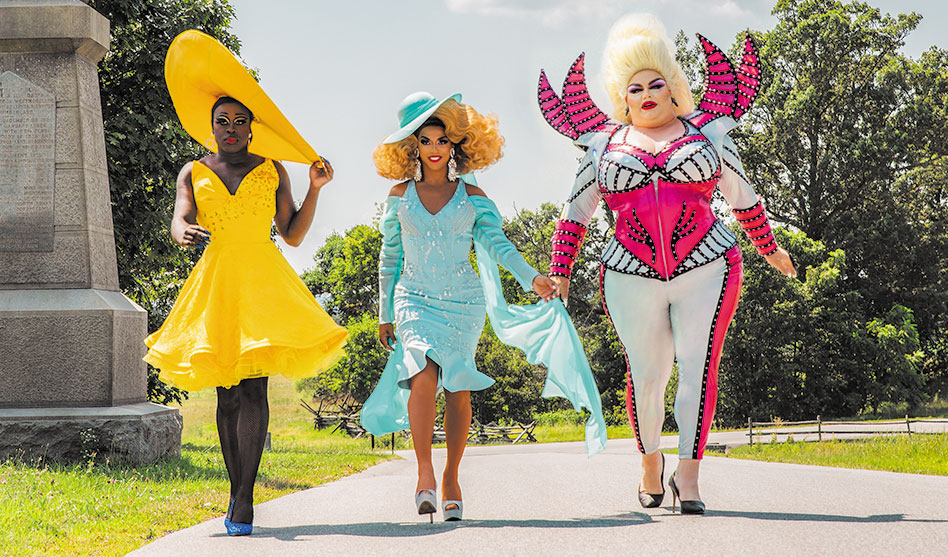 Drag queens have always been as famous for their shadiness as for their illusions — RuPaul’s Drag Race even includes the regular feature “The Library Is Open” — but if the pandemic has taught us anything, it’s that we’re all in this together. And that message is foremost at the heart of the new HBO reality series We’re Here, in which three divas traverse the U.S. bringing communities together through the magic of drag.

And perhaps coincidentally, it also embodies the attitude of one of the hosts: Shangela LaQuifa Wadley.

Although she never officially took the title “America’s next drag superstar,” glam goddess Shangela has ended up being perhaps the ideal ambassador for unity in a time of social isolation.

“We are living in the times of Miss Rona, but we are making it work! Halleloo!” she exclaims with her signature enthusiasm (and catchphrase). 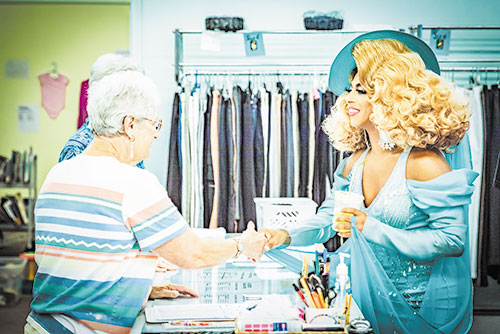 Shangela — who out of drag is just Paris, Texas, native DJ Pierce — has had one of the more public career trajectories in drag: She appeared on the second season Drag Race only months after her first time in drag and was the first one booted; she returned for Season 3 (doing better) and became a frontrunner on the third installment of All Stars; she also co-starred alongside Bradley Cooper and Lady Gaga in A Star Is Born… which is kind of a win in itself. Over that decade, we have seen her evolve from inexperienced newbie to the reincarnation of Diana Ross, always with a can-do spirit and openness of heart that has made her a perpetual fan favorite.

“We’re all part of the same family,” she says of her drag sisters. “[Trixie Mattel, who defeated her on All Stars] has always been a supportive friend of mine. We are all hard-working divas.” And that extends to her new co-stars. For We’re Here, Shangela joins Bob the Drag Queen and Eureka O’Hara in the makeover show that’s part Queer Eye, part America’s Next Top Model and part Priscilla Queen of the Desert.

“I have worked with Bob and Eureka [in shows] all around the globe, but Eureka used to live in Tennessee and Bob lives in New York, and I live in L.A. But until we got the invitation to be a part of this show [we had never spent so much quality time together]. We learned so much more about each other through this process of filming.”

And, in turn, they learned a ton about America.

Each episode sees Shangela, Bob and Eureka traveling to “small towns in America who have these queer or queer-adjacent folks, and taking them on [as drag daughters] for their first time in drag in this show. We have to go out to the community and see if we can get people to come out. We go through a lot with [them] to produce a drag show where they haven’t been before … in just a week! Honey, grab the Kleenex and the popcorn — it’s very emotional.”

But more than just mawkishness, the queens insisted on being true to their craft.

“When we signed on, we were vocal about being part of a project that looks and sounds and is authentic to the drag world. [The series creators] were very open to that idea…” so open, in fact, that the queens all signed on as co-producers.

The potentially stifling burden of small-town life is something Shangela knows first-hand.

“When you’re from a small town, you don’t necessarily see people who are like you [even on TV]. The first time I went to Dallas and saw two men holding hands on Oak Lawn I was like, ‘Oh my!’ But [the message of the show is,] there may be a community that will stand beside you. A makeover show? If it’s making over anything, it’s an outlook. We partner with some very interesting stories, but they aren’t unique. Wherever we are, we experience some of the same challenges — including being weighed down by the looks and stares and back-hand comments, the solitude and the desire to be better than we are.” (Lately, solitude especially.)

Promotion for the series was curtailed due to the pandemic; the girls were scheduled to attend SXSW and had multiple red-carpet events sidetracked. Still, Shangela hopes the series will come back next year, because there’s still much more they can accomplish.

“We only went to six cities — many of which none of us had ever been to,” Shangela says. “And there are so many small towns across America. It isn’t all rainbow flags and Pride parades — we are still living in Trump America where [some] people are emboldened to say negative things to people from different communities.” (Did the threat of ignorance and hatred lead them to take extra precautions about security? I ask. “Honey, I was with Bob and Eureka — that was all the security I needed!”)

Shangela remains an energetic cheerleader for the drag world … and the gay community as a whole.

“My heart goes out to my community — the drag queens, the go-go dancers, bartenders, promoters. Their lives have been halted! We are going to have to find out ways to support them.”

She recently re-released on YouTube a video of her first one-hour standup cabaret, recorded in New York in 2012, LaQuifa is Halleloosing It! “We understand the seriousness [of the lockdowns], but you get bored! I wanted to release this for free on YouTube. I had people who [wanted me to monetize it], but I said no we are going through this as the world together.” And coming in May to a streaming service (she can’t say which yet) is Shangela’s Shook — an episode-by-episode guide of what you didn’t see on All Stars 3.

Until then, Shangela is stickin’ around Texas to be close to family and “doing my best to flatten this curve. I know we will get through this and adapt.”
Halleloo!

LaQuifa is Halleloosing It is currently available on YouTube (you can find it on the Shangela L. Wadley page).