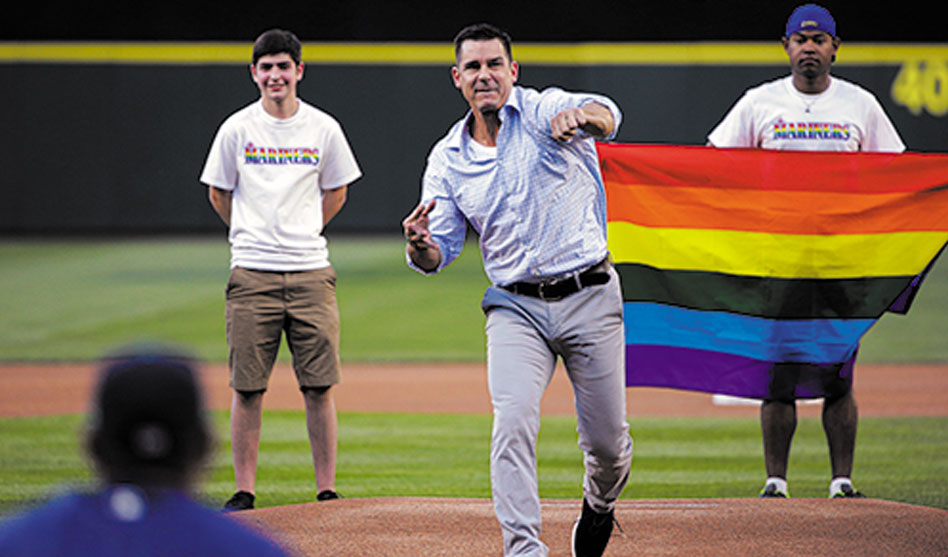 After a season-long hiatus from hosting in-the-stands fans at its 30 ballparks and stadiums due to the Covid-19 pandemic, Major League Baseball (and its Minor League Baseball feeder system) is back — and you know what that means: All them butts!

Aside from gawking at your favorite players’ posteriors in form-fitting pinstriped pants — while following CDC protocol, of course — there are plenty of queer cheers to give for America’s national pastime. These are gayest things you didn’t know about pro ball.

Glenn Burke broke the first barrier, but it may have cost him
As an outfielder for the Los Angeles Dodgers from 1976 to ’78 (and widely regarded co-inventor of the high-five — true story), Glenn Burke broke ground as the first active MLB player to come out as gay to his teammates and bosses. While he was asked to refrain from making his sexual orientation public by Dodgers’ top brass, Burke told People magazine in 1994 that his “mission as a gay ballplayer was to break a stereotype,” and he thought it worked.

In other interviews and in his autobiography, however, Burke suggested that prejudice drove him out of the sport, not the injury that sent him back down to the minors after a year with the Oakland Athletics.
The A’s released Burke from his contract before the end of his injured farm-team season, and he retired from the game in 1980.

In the initial years following his retirement, Burke competed in 100- and 200-meter sprints at the inaugural Gay Games in 1982 and in basketball at the 1986 Games, and for many years he played for the San Francisco Gay Softball League. Burke died of complications from AIDS in 1995.

Burke befriended Tommy Lasorda Jr., and Tommy Senior wasn’t happy about it
Legendary Dodgers manager Tommy Lasorda Sr. — who led the team to two World Series championships, four National League pennants and eight division titles during his 20-year stewardship from 1976 to 1996 — had a gay son. Burke befriended the younger Lasorda, which angered the “family values” manager, causing a rift that likely contributed to Burke being traded to the A’s after three seasons in Los Angeles.

Lasorda Jr. died of AIDS complications in 1991 at age 33. Lasorda Sr. died earlier this year without ever having admitted he had a gay son.

It’s been 22 years since the second MLB player publicly acknowledged his sexual orientation
Billy Bean, an outfielder for the Detroit Tigers, L.A. Dodgers and San Diego Padres from 1987 to 1995, came out in the Miami Herald in 1999, four years after retiring. Besides Burke, he remains the only other former MLB player to publicly acknowledge his homosexuality post-career.

No active player has ever come out publicly, and no former players have come out since. In 2003, Bean released his autobiography Going the Other Way: Lessons from a Life in and out of Major League Baseball, and in 2014 he was named MLB’s first Ambassador for Inclusion.

In 2016 that role was expanded to vice president of social responsibility and inclusion, and today Bean serves as vice president and special assistant to the commissioner.

The L.A. Dodgers are the only team for whom both players who have come out as gay played
Both Burke and Bean played for the Dodgers during their MLB careers — and as history tends to repeat itself, maybe there’s a gayby on the Dodgers’ roster right now. If that’s true, here’s hoping he has the courage to come out and make history while an active player, put the final nail in the coffin of the Dodgers’ homophobic past and serve as an inspiration to aspiring young pro ball players everywhere.

Statistics suggest there are dozens of closeted pro baseball players
In a 2015 article for the New York Times, economist and public policy scholar Justin Wolfers wrote that, based on the proportion of American men who have admitted to being gay or bisexual (though not necessarily out), there must be closeted MLB players actively taking the field. Thirty MLB teams each have 40-men rosters, equaling 1,200 players who don’t publicly identify as queer.

“If baseball players are as likely to be gay as other men their age — let’s go with an estimate of 1 in 25 — then the odds that none of these men are gay is one in two sextillion,” Wolfers wrote. “A sextillion comes after a trillion, quadrillion and quintillion; it is a thousand billion billion.”

Of course, there may be gay or bisexual men in MLB who have ripped a page from Burke’s playbook and only confided within their own club. Time will tell.

Lower-level pro ball has a much better coming-out average
Since Sean Conroy, former pitcher for the independent Sonoma Stompers, came out publicly in 2015 while still on the team’s roster — the first-ever active pro ball player to do so — a handful of others have followed in his pioneering footsteps (at various stages of their careers), including MiLB players David Denson, Tyler Dunnington, Jason Burch and John Dillinger.

The San Francisco Giants made rainbow history for Pride 2021
MLB teams are known to incorporate cause-based logos and patches into their uniforms throughout the season — like the pink breast cancer awareness ribbon, for instance, or camouflage to show military appreciation.

But on June 5, 2021, the San Francisco Giants became the first team in big-league history to rainbow-ize its uniforms, including a right-sleeve home jersey patch in Pride colors and a matching logo on players’ hats, in celebration of its LGBTQ+ fans.

A scripted series about gay professional ball players may be coming soon
Author Peter Lefcourt’s novel, The Dreyfus Affair: A Love Story (1992), about homophobia in baseball that follows two MLB players who get caught up in a sex scandal should be required reading for any on-the-spectrum queer sports fans, but if you’re adverse to cracking open a dusty book, the live-action TV adaptation may be coming to a streaming service near you.

Universal Television has optioned the novel for development with Oscar- and Emmy-winner David Frankel (The Devil Wears Prada) tapped to direct and co-write the pilot with Lefcourt.

The project has been in development in some form for the past 28 years. Studios put the kibosh on Lefcourt’s and Frankel’s original movie scripts in 1996 — Disney was even interested at one point — citing lack of commercial appeal.

But we all know that’s just industry code for “We’re too pussy to make this gay movie, so here’s Evita.”

Perfectly acceptable. Fine badonkadonks all around.

But are there better booties at-bat?

Mikey Rox is an award-winning journalist and LGBT lifestyle expert whose work has been published in more than 100 outlets across the world. He currently works for the Atlanta Braves. Connect with Mikey on Instagram @mikeyroxtravels.