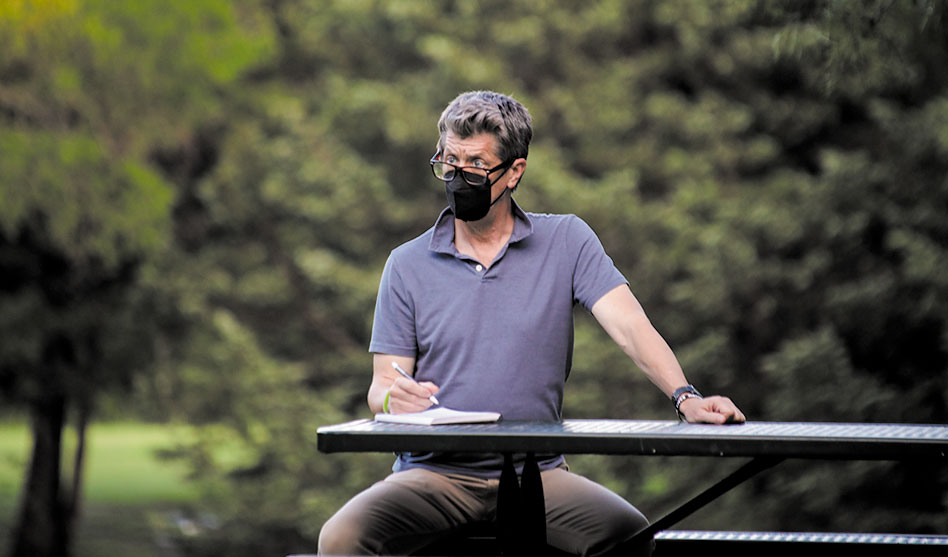 For its first equity live show in some time thanks to a certain pandemic, Theatre 3 decided to hit the road. Armed with a classic musical staple and a small cast, the company’s boutique production of The Music Man will perform at three venues during its run, and on Wednesday, the denizens of River City, Iowa, will come alive at Union Coffee Shop in Oak Lawn.

Perhaps most productions of the Meredith Wilson musical would involve a large cast and big production values. There’s a big train scene opener; there is the Independence Day celebration and the “76 Trombones” boys band.

But Theatre 3 and director Joel Ferrell wanted to strip their new show down — like, way down.

“We talked a lot about the show being very portable and malleable. My dream going into this was that we could pick it up and plop it down in a park in the middle of the city,” Ferrell said by phone. “I think we’ve forgotten that, thousands of years ago, theater was outside; it was transient. So this one for me has been an experiment.”

Ferrell expanded on the idea saying that The Music Man is a character-driven show that can be told regardless of production. In his days as a director at Casa Manana, he credited his experience of working in the round for allowing him to stage this unique production with confidence. 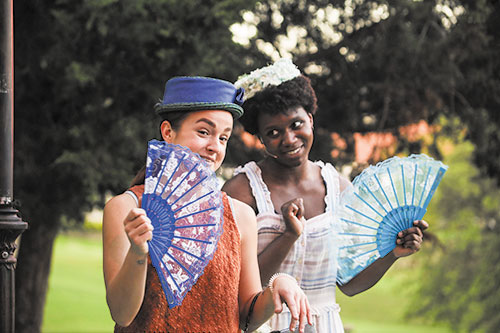 “It’s a Shakespearean show in a way. There’s no real need for the costumes and large sets, because it’s about the characters. I don’t know if Meredith knew he was doing that with this show,” Ferrell said.

The cast is 10 strong, and, save for the leads, those actors play all the extended characters of the show, which is performed across three stage set-ups.

The show opened at the Coppell Senior Center, which Ferrell described as a bucolic backdrop for the show. Come Wednesday at Union Coffee Shop, he expects an entirely new ambience to the show.

“The thing about Union is that you may have airplanes, fire trucks and people out on the street. It’ll be a free-for-all, but I love that. I know these 10 actors can handle the chaos smack in the middle of Oak Lawn,” he said.

But bringing it to Oak Lawn was a bit of a conscious decision: The Music Man might be a slice of small-town Americana, but Ferrell sees a deeper side to the story that can resonate among the LGBTQ community.

“Meredith celebrated this community of people who are completely imperfect and stubborn. They’re slow to change, but once you’re a part of that community, you can be as weird and as wonderful as you want to be. That is my community in some ways, and you build trust to get in, but you can always be you,” he said.

Ferrell added that he, along with Theatre 3 artistic director Jeffrey Schmidt, music director Vonda K. Bowling and associate artistic director and producer Christie Vela, cast the show with “an eye toward anybody who came to see it could see themselves in a million different ways” 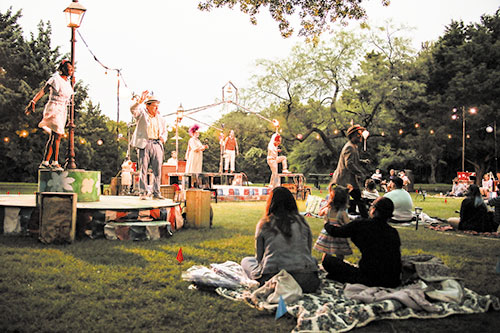 “I hope people see themselves reflected today and portray any damn character they want to. We have gay, straight, gender fluid in the cast and therefore feels to us much more as a complete community,” he said.

Bringing it to Union has additional significance for Ferrell. Sure Theatre 3 is heading to the gayborhood, but the space itself has its special meaning. Union isn’t just a coffee shop but also a worship community and arts venue founded by Rev. Mike Baughman whose wife Rachel Baughman is the senior pastor at Oak Lawn United Methodist Church.

“Some time back, I met both Mike and Rachel Baughman, and I knew about Union from its inception and that it has focused on being a safe space for LGBTQ youth and the community,” Ferrell said. “It was clear to me that it was so mission-driven to care for and be protective of a community who may feel marginalized in their own city. When I first went there, there was a trans youth meetup group. It was so clear to me that Union was offering a space I would have desperately loved to have at their age.”

After its run at Union, “The Music Man” will perform next at Texas Discovery Gardens June 30-July 4.

The Music Man opens Wednesday-June 20 and June 23-27 at Union, 3705 Cedar Springs Road. Tickets are $75 for a two-person socially distanced square and can be purchased at theatre3dallas.com.