For 10 years, Gay-Straight Alliances in Fort Worth schools have given LGBTQ and their straight friends a place to go for support and safety 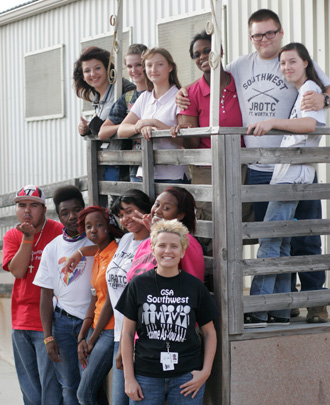 GATHERING | Rebecca Cooper, front center, opens her classroom at Southwest High School to LGBT students and their friends looking for someplace where they feel safe enough to talk openly, and where they can find friendship and support from others like them. (Andrea Grimes/Dallas Voice}

This year, on any given Friday, dozens of kids show up to Rebecca Cooper’s classroom in a cramped, low-ceilinged portable building to do what a lot of kids do — braid each other’s hair or practice gymnastics in the grass outside.

But they also do what a lot of kids will never have to do: trade phone numbers so that when they come out to their family, they’ve got a place to go and a support group if the conversation ends in a fight, or worse — homelessness or even a suicide attempt. (An estimated 20 to 40 percent of homeless youth are LGBTQ, according to the National Gay and Lesbian Task Force.)

Between the hair braiding and the back flips, Gay-Straight Alliance clubs save lives. It’s as simple as that.

“Because there’s a lack of fear [at GSAs],” says Cooper, students are confident in sharing their own personal experiences to help their peers.

At a meeting, says Cooper, you might have a kid who says, “I thought about suicide three days ago.” But “before you know it,” she says, “You’ve got six, eight, 10 kids around him, like swoosh. They’re going, ‘Here’s my phone number, I’ve been there.’”

Anti-bullying efforts have moved to the forefront of the national conversation in the past couple of years, thanks in part to high-profile campaigns like Dan Savage’s “It Gets Better” project, which inspired Fort Worth City Councilmember Joel Burns to tell his own story, during an October 2010 City Council meeting of contemplating suicide after being bullied.

But every week — and every night, and every day, really whenever a student needs a help or a hug or a sounding board — since December, 2001, students in Fort Worth’s Gay-Straight Alliances have been telling each other that it gets better, that there’s someone out there who cares.

Cooper estimates that up to 70 percent of her club is straight. The unity and cooperation between straight and non-straight students is part of what makes the simple existence of GSA’s so impactful.

Not only are GSAs safe spaces for LGBTQ students, they also build rapport and trust between the LGBTQ community and the straight majority.

“Straight people want to be part of the change,” says Western Hills’ Q-Status President Italia Salinas, a junior. “You don’t have to be gay to help others have respect and support.”

Often, hurtful and hateful speech comes out of what English teacher Marvin Vann calls anti-gay individuals’ sense of a “mandated right” to denounce homosexuality because of their religious beliefs. He says Gay-Straight Alliances help give strength to students who might otherwise feel swamped and surrounded by Christians with “loving” messages — like the employee who told Italia Salinas’ friend she was going to hell for being a lesbian.

Last year, recalls Salinas, a school employee — not a teacher — told a friend of hers that she’d go to hell because of her sexuality.

While Salinas and her friend were walking down the school hallway one day, an employee asked the two girls where they were headed. When they talked about going to a Q-Status meeting and explained what it was, the employee asked Salinas’ friend if she went to church. She said she did, a Catholic church.

Salinas remembers the employee, someone they’d laughed and joked with since their freshman year, telling her friend, “I love you, but being gay is not okay, and I care about you so I don’t want you to go to hell for doing that.”

Salinas says her friend was “in shock” that a school employee would say such a thing to a student.

Cooper says she’s had to correct other teachers who would tell students it’s not okay to be gay — teachers who didn’t even realize that Cooper herself was gay.

Tensions between teachers, administrators and school employees have heightened in Fort Worth over the years, so much so that Sharon Herrera, an out lesbian herself, was brought in to teach training seminars and handle complaints.

But, as reported by the Fort Worth Weekly, Herrera was perhaps too good at her job.

Her position was eliminated at the beginning of this year, and although she’s still an employee of the district, she’s no longer conducting the seminars and handling the multitude of complaints that came across her desk, which included instances of anti-LGBTQ bullying as well sexual and racial harassment.

Everything, it seems, has gone silent. But that doesn’t mean everyone’s problems have been solved.

Herrera says that quality training that is LGBTQ-specific is vital in Fort Worth, and programs like their “It’s Not Okay” campaign, launched in June of 2010, simply do not address LGBTQ issues in a meaningful way — or at all.

Instead, it is often left up to the more-than-capable students to stand up for themselves when something goes wrong. That’s one of the wonderful things about GSAs, say participants: They get to learn real-world activism in high school.

This year, Italia Salinas says, Q-Status has not been allowed to make public announcements and hang signs in the hallways, ostensibly because they’re a non-academic group. However, a conservative Christian extracurricular group for boys at the school has been able to do those things.

Salinas and her group will have to actively fight to get their school to respect the Equal Access Act, which guarantees that if one extra-curricular club has access to school resources, all of them must.
Nine students from Fort Worth ISD marched in the city’s recent gay Pride parade, and when the Dallas Voice stopped by Southwest High School to talk to their Gay-Straight Alliance, the room positively lit up when the march was brought up.

Hands shot into the air, attached to squirming bodies, each student anxious to talk about the amazing feeling they got from being accepted in an adult space.

In fact, says Western Hills’ Q-Status teacher sponsor Bernardo Vallarino, showing kids that the LGBT community is more than just dance clubs and drugs — something he was exposed to very early on as a young man — is an integral part of what GSAs do for students.

In forming GSAs, he says, “it creates a right way of learning about the LGBTQ community that doesn’t include drugs, alcohol or inadequate sex.” The biggest take-away from GSAs, says Herrera, is that they prevent bullying and, again, save lives because of their specific focus on the needs of LGBTQ students.

Inclusivity, says Herrera, is not enough; LGBTQ kids need programs tailored to their specific challenges — challenges that are made ever more apparent every time the local news reports on yet another bullied teen’s suicide.

Southwest junior Ryan McCaleb says being gay “is the way we live, think, breathe.” But because of the social stigma and pressure from religious and conservative students and teachers, he says, “You’re the talk of the school, and everything that’s said comes back times 10.”

The Gay-Straight Alliance is a place where kids understand what that feels like — that unique feeling of shame and pain that LGBTQ kids deal with, especially LGBTQ kids in conservative cities like Fort Worth, and that their straight friends want to help alleviate. As president of Q-Status, Italia Salinas says her GSA “gives [her] hope for humanity,” that hatefulness and bullying can be prevented before it begins.

Vallarino says that in 10 years of Gay-Straight Alliance clubs in FWISD, some goals may have shifted. Last year, they successfully focused on getting written policies in place against workplace and schoolharassment and supporting equal treatment, while this year they’re hoping to get a GSA in every high school and middle school.
………………………………….

• Q-Status: “Q- Status is a group built on the human differences of its members, a safe place where everyone is welcome and no one is turned away. Our focus is centered on the education of our members and the community around us. We thrive by making new friends and by accomplishing our goals of informing and educating others of the cultural and legal inequalities faced by many groups including the homosexual community and their families. Everyone is welcome (heterosexual, bisexual, homosexual, questioning, confused, curious, etc.)”

• Southwest High School GSA Vision Statement: “The Gay-Straight Alliance GSA at Southwest High School is a student-led and -organized club that aims to create a safe, welcoming and accepting environment for all youth regardless of sexual orientation or gender identity. The GSA brings together gay, lesbian, bi-sexual, transgendered and questioning (GLBTQ) youth with their straight peers to address issues such as bullying, harassment, discrimination and bias. GSA allows youth to build coalitions and community that can work towards making a safer school environment for all people. Motto: Come as you are.”

But ultimately, “One thing that has never changed is that GSA’s are a safe haven.”