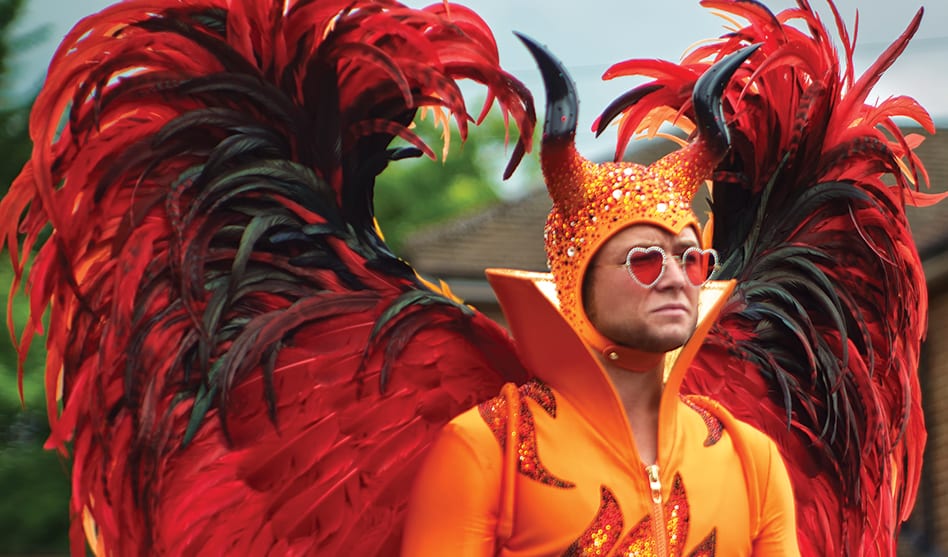 We really are living in a golden age of live-action movie musicals. Beginning around La La Land and speeding through The Greatest Showman, Bohemian Rhapsody and A Star Is Born, seeing actual actors sing and dance onscreen hasn’t been as satisfying since the day of the Freed Unit at MGM. But this ain’t the ’50s — we don’t do happily-ever-after boy-meets-girl anymore; our musicals are filled with broken people, tortured artists, gay sex and lots and lots of drugs.

Here’s the plot of one: In the 1970s in England, a closeted outsider with a strained family life becomes a musical superstar, takes America by storm and gets drawn into a downward spiral of drugs and bad behavior after his sneaky boyfriend becomes his manager, only to finally realize the error of his ways and get back on track. There’s a montage of newspaper review headlines; director Dexter Fletcher is also involved.

Coming so fast on the heels of Bohemian Rhapsody (and A Star Is Born for that matter), Rocketman underscores how the rockstar biopic really is problematic, or at least inevitable in its story arc — you either survive your success or you don’t, and either way, you’re a legend.

But the secret sauce of Rocketman is the song catalogue of Elton John and Bernie Taupin; the film employs more than 20 of the at least three dozen I can name off the top of my head. That’s the kind of pop-culture influence few can claim. (That kind of omnipresent relevance sometimes works against the film. Aside from passing nods to The Beatles and Elvis, virtually no other rock artists, and certainly no contemporaries, are ever mentioned. The movie is as narcissistic as its protagonist.)

But as movie musicals go, Rocketman more closely approximates Pink Floyd’s The Wall or Pennies from Heaven or Chicago than Grease or even Aladdin. Written by Lee Hall (who also penned Billy Elliot), the plot relies on an unreliable narrator (Elton himself, played with sexy brio by Taron Egerton) and projects the woozy unlikelihood of a fever dream. And being a fantasia, it’s not constrained by a consistent or accurate narrative — songs are placed not in the order recorded, but for their emotional resonance. A realistic timeline is afterthought. And the story ends about 30 years ago, which means much of Elton’s life and career — his involvement in AIDS, his tragic friendships with Lady Di and Gianni Versace, his Oscar and Tony awards — don’t come up. (Maybe a sequel — Rocketman 2: Splashdown?) never come up.

But what is presented is pretty damn great.

Not only does it treat gay characters with frankness and respect, Egerton and Richard Madden (as his wily manager John Reid) share genuine sexual chemistry. And the subtext of the actual love affair — the one between Elton and his straight songwriting partner Bernie Taupin (Jamie Bell) — aches with tender intimacy, if one that goes physically unrequited. Their creative process — where Elton turns Bernie’s poems into organic works of art — overflows with love. And there’s a definite warts-and-all quality for an “authorized” biopic (John and his husband David Furnish are producers).

Egerton doesn’t have quite the same furious energy as Rami Malek as Mercury, but his late confrontation with his distant father, observing him finally at ease being affectionate to his younger sons, will resonate especially for gay men who have perhaps felt alienated from their parents because of their sexuality. And it strongly reinforces the underlying theme of the film (and Rhapsody, as well) — that a public persona for a queer celebrity is largely an act of will: “Be yourself,” Bernie counsels Elton, to the retort, “Why the fuck would you say that?”

The real monsters in this ‘Godzilla’ movie are the script, direction and photography.

There are few summery tentpole movies as consistently wretched as Godzilla: King of the Monsters, one of the most infuriatingly execrable brain-killers of the current millennium. Amazingly, I didn’t walk out early (as I did for another cinematic abomination of 2019 called High Life), more out of apathy than any real hope that it might, against all odds, pull a flaming rabbit out of its helmet. It was almost as if I was challenging the film itself: You have to get better eventually, right? Warner Bros. didn’t really sign off on a $200 million budget for a murky, nonsensical, choppy, rudderless monster movie in the post-Jurassic universe. I mean, come on… Really? … Beuller? It’s as if the folks making movies have never watched any of them.. The good ones, at least.

I gave it a chance, despite my misgivings, because I largely enjoyed 2014’s Godzilla, even though Kong: Skull Island — another installment in the MonsterVerse (because that’s where we are as a society now) — was a steaming pile of gorilla feces. (Up next year, by the way? Godzilla vs. Kong. Deliver us.) There were several ways the filmmakers could go: Horror–thriller, camp, snarky comedy. Of all the options, they went with pretentious snoozefest.

One of the smart twists from last year’s The Predator was that it let us see the predator more than in prior films. There was no mystery anymore, why just parade the goods. So I wonder what the makers of King of the Monsters are afraid of. Why hide your leading man behind dense clouds of smoke, rain and debris, with a jumpy hand-held camera that seems perpetually out of focus? Why bathe everything in a gray-blue light as if you were filming inside an underground club’s restroom? Are you ashamed of your monsters? This is easily one of the ugliest films ever released on multiple screens.

The dull look might be explicable if the script had even tiny redeeming qualities; it does not. Science fiction doesn’t have to be entirely logical, but it should be, at a minimum, internally consistent — don’t stray any further afield from the realities of the physical world than you need to. But Godzilla continually doubles down: the earth is a hollow shell; one of the monsters is an extraterrestrial who cannot be destroyed by bombs that evaporate all life; the monsters all communicate sonically across untold thousands of miles, although they seem to sneak up on each when they are about 11 feet away.

Every line of dialogue seems calculated to contradict the previous line. Idiotic plans are signed off on by everybody without dissent, even though they all are fundamentally at odds the rest of the time. The villain (it’s Vera Farmiga — no spoiler warnings here) wants to eradicate the planet of the human virus, not unlike Thanos, yet her husband and daughter still give her a tearful death. The end, when Godzilla basically eats his opponent (I told you — no spoiler alert), made me laugh, and not in a good way. Roland Emmerich’s 1998 Godzilla may have been lame, but at least it had a sense of humor about itself. But this is one of the most humorless movies I’ve ever endured. The climax is set at Fenway Park, but there isn’t even a cheeky nod to the left field wall being nicknamed The Green Monster! You can’t respect any film that misses that kind of low-hanging fruit.