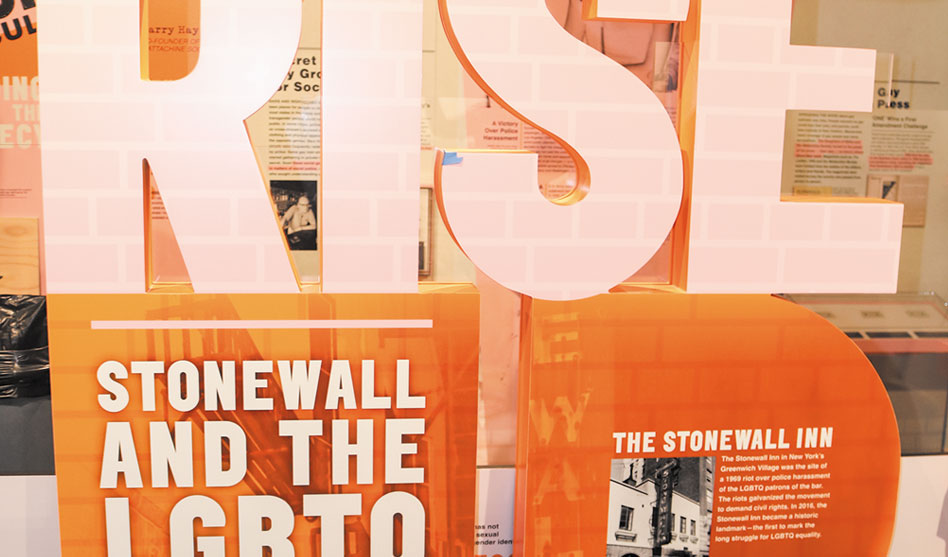 Rise Up: Stonewall and the LGBTQ Rights Movement at the Dallas Holocaust and Human Rights Museum tells more than the story of the protest that erupted when a small bar in New York was raided. Packed into the exhibit is more than 50 years of LGBTQ history — complete with photos, artifacts, films and interactive displays.

The museum, which began its life in the basement of the Jewish Community Center, moved downtown to an old building in the West End and rebranded itself as the Dallas Holocaust Museum Center for Education and Tolerance. When the museum built its own building that opened in 2019, museum Director Mary Pat Higgins said she, her board and community members thought we, as humans, could do better than just tolerate each other. So human rights became part of the museum’s mission and is now included it’s the name as well. 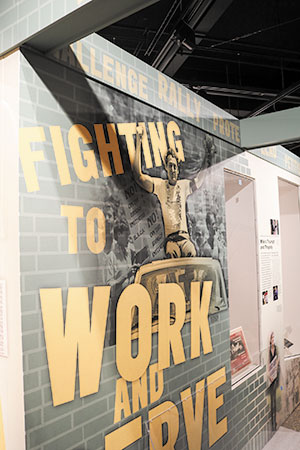 And among those human rights the museum is dedicated to advancing are LGBTQ rights.

DHHRM’s permanent exhibition includes stories of Dallas LGBTQ people who advanced the community’s rights — the story of John Thomas and the fight to create Resource Center, the story of Ron Woodroof and his Dallas Buyer’s Club and the story of Dallas Gay Alliance founders Bill Nelson and Terry Tebedo and Don Baker whose lawsuit resulted in the Texas sodomy law being declared unconstitutional for the first time.

DHHRM has named Mica England an “Upstander” because she stood up and fought — in the streets and in the courts — to be allowed to apply to become a Dallas police officer. Dallas was the last major city that actually asked on its application if an applicant were gay or lesbian. England’s picture is displayed prominently in the museum alongside other local civil rights heroes.

So when the Rise Up exhibit on LGBTQ history, created by Freedom Forum for the Newseum, became available, DHHRM booked it.

This exhibit includes seven sections. The first focuses on ending the secrecy. Newspaper headlines from the 1950s examine the oppression and attitudes toward gay people. That atmosphere led to the 1969 Stonewall Uprising and other events like it in cities around the country around the same time.

The next section is about the power of popular culture. It explains how media portrayals of LGBTQ people influence public opinion. The fourth section highlights the fight to work and serve. Until a 2020 court ruling, workers in the U.S. could be fired just because of his or her sexual orientation or gender identity. And the right to serve in the military was restricted by Don’t Ask, Don’t Tell until it was overturned during the Obama administration. 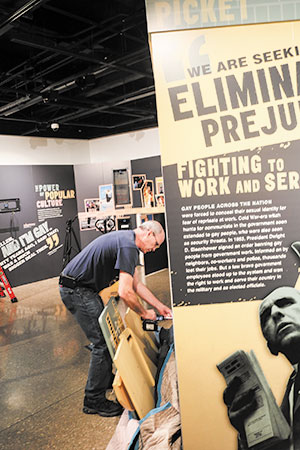 The section on Into the Streets documents the fight for equality through protests leading into the fight between some faiths and the right to marry. The right to marry is explained from a national perspective in the exhibit, but a scene from our local battle is also illustrated in a display case in the lobby. Photos by Barbara Rosenberg and

Dallas Voice photographers and a pair of handcuffs used by Major Jimenez and Beau Chandler during their attempts to secure a marriage license show how the fight played out here in Dallas.

Before the Obergefell marriage equality decision in 2015, Jimenez and Chandler applied for a wedding license and were denied because of Texas law. So the couple handcuffed themselves to a stanchion in the marriage bureau as a protest and were arrested. Finally, after marriage equality came to Texas, they were married by Judge Tanya Parker, who had refused to perform any weddings until she could perform all weddings.

While inspiring and uplifting, the exhibit doesn’t claim victory. It warns, instead, that the fight is far from over.

Sprinkled throughout the exhibit are a number of interesting artifacts that illustrated the battle through the years. Among them is the red suit Sen. Tammy Baldwin wore when she was first sworn in as a member of the Wisconsin State Assembly. Baldwin went on to become the first out lesbian elected to the U.S. House of Representatives and then the first elected to the U.S. Senate.

With Baldwin’s success came other political gains. Pete Buttigieg ran for president. While he didn’t win, he has a place in the Biden administration as secretary of transportation. We now have three LGBTQ governors around the country, and, even in Texas, we now have eight LGBTQ members of the state legislature.

But Higgins points out that overall progress isn’t always forward movement. Along with the Obergefell marriage equality decision came an increase in hate crimes. And as more and more people have been coming out as transgender and as so many have come out at a younger age, trans youth have become scapegoats because they’ve been easy to persecute. 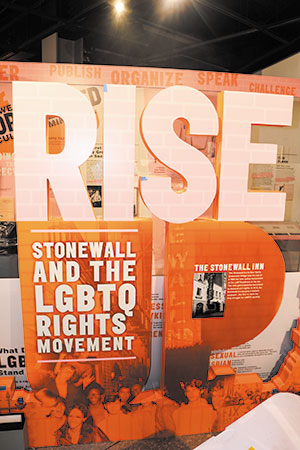 Three panel discussions have been planned around the exhibit. The first includes a discussion of the Stonewall riots. Mark Segal, who was at the Stonewall Inn the evening of the rebellion and is publisher of Philadelphia Gay News, is among the speakers.

Segal said he was the one who chalked “tomorrow night Stonewall” on walls and street, notifying people the rebellion would continue the next night.
As the exhibit has toured the country for the past five years, Segal has spoken at the various venues. He said he usually discusses what actually happened and how long the rebellion lasted compared to the myths that have grown around the event. He was active in Gay Liberation Front, the first inclusive LGBTQ organization, and participated in its growth during the year following Stonewall that led to the first Pride parade and the beginning of organizing around the country.

That panel discussion takes place on Jan 25 at the exhibit’s opening and is already sold out. Other panels include a May 2 discussion on securing transgender rights. On June 7, a third panel will discuss Dallas LGBTQ history.

Higgins said support for the exhibit itself is indicative of the progress the LGBTQ community has made. “It’s wonderful we’re at the point Texas Instruments and Toyota would be sponsors of this exhibition,” she said.

Andy Smith, executive director of the Texas Instruments Foundation, said his company’s support of the exhibit goes back to belief in the mission of the museum.

“Educating students with lessons learned to make sure events like the Holocaust never happen again aligns with our company’s philosophy,” he said.

As an example, Smith cited TI’s own Upstander program that honors those who work to make the world a better place. He also said he liked the timing of the exhibition coming on the 30th anniversary of the Texas Instruments LGBTQ employee resource group that has helped employees “bring their whole selves to work.”

Rise Up: Stonewall and the LGBTQ Rights Movement is at the Dallas Holocaust and Human Rights Museum, 300 N. Houston St. through June 18. The exhibit is included in museum admission of $19 for non-members. DHHRM.org.