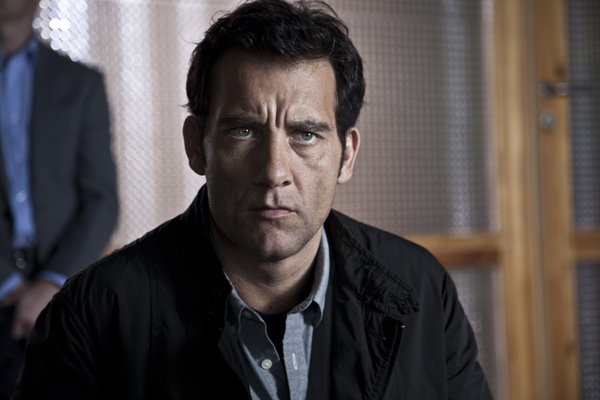 I must have missed the memo where this was the official weekend to release international films with mixed casts and filmmakers and styles. Only that could account for why Intruders (set in Spain and Britain with an international cast and in two languages) and The Raid: Redemption (set, I think, in Indonesia with a multi-racial cast and a Welsh director, but mimicking Hong Kong action films) are in theaters at the same time. Both are interesting messes.

The idea for The Raid: Redemption (which makes it sound like a sequel to some film called The Raid, though apparently it’s not) is that an evil drug lord lives on the top floor of a building, and a squad of cops are raiding it … but first have to get through all the security on the 17 floors below. But the film is nonsense from before the movie even begins. The poster tagline mentions “30 floors of chaos.” Only the building where the action is set — and clear from the post — is 18 floors high. Where’d the other 12 floors go?

That’s the least of its problems. Despite being set in a monolithic concrete tenement, oddly, the flooring between stories is all wooden (which allows people to fall through without using the stairs), as is the walling in some rooms (old-fashioned lattice work, at that!). Why? Because it makes for better action sequences. And let’s face it: This movie lives for its action sequences. The chop-socky set-pieces make a Jackie Chan movie look like the Merchant-Ivory production Gwyneth Paltrow Has Afternoon Tea with a Box Full of Kittens.  Again, nothing makes a lick of sense — there appear to be about a dozen cops in the van when they arrive; it seems about 200 are killed — but the physicality is exhausting and mindlessly exciting. This is the kind of movie that you’ll talk about years later only to compare action scenes and prove you’ve seen something special and a bit obscure. If that doesn’t interest you, don’t bother.

Intruders is almost the opposite: A film that muddles its idea so badly, it’s really nothing at all — a horror film that’s never really horrific, an art flick that lacks a sense of artistry.

The film tells two parallel stories: In Spain, young Juan is terrorized by a faceless creature that crawls in his window at night, frightening him and his mother. She begins to believe the boy may even be possessed — these are not dreams, but psychosis. The second story is set in England, where a teenaged girl discovers an old story, hidden away in her grandparents’ garden, that tells the story of Hollowface — the same creature that stalks Juan. What is their connection? How has this monster come to life?

Clive Owen, the only name member of the cast, plays the girl’s father John, who believes she’s actually being stalked when he confronts the intruder. But the explanation for what it is and why it wants her is both twee and convoluted.

There are a couple of jumps along the way, but not many, considering how universal the horrors of childhood bogeymen are. The director, Juan Carlos Fresnadillo, did a much better job at the weird artistry of fright films with Intacto. This one doesn’t intrude on your dreams, it merely inconveniences your afternoon with tame chills.